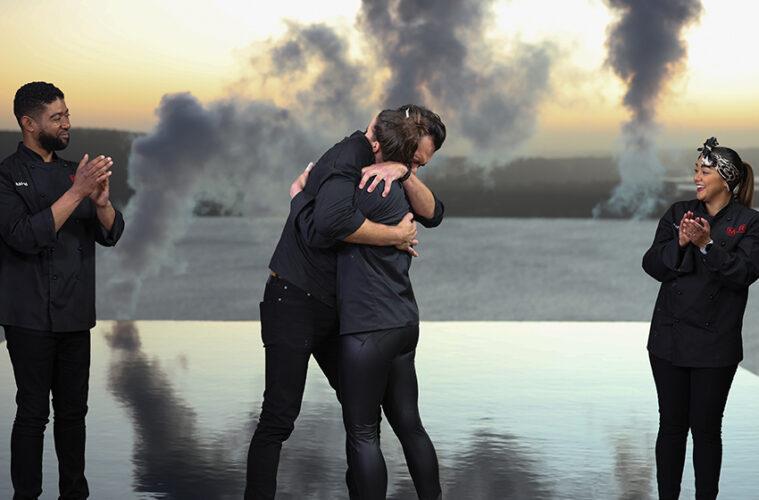 The three teams had found their way to the final in a beautiful stone mansion perched high above Sedgefield on the Garden Route. The three finalist duos produced a three-course meal that showed their strengths while honouring their culture and heritage, which were judged by MKRSA judges David Higgs and J’Something, along with kitchen superstars Siba Mtongana, Zola Nene, Wandile Mabaso and Kayla-Ann Osborn.

Amongst all the excitement, we managed to steal a few moments with this season’s winners to chat about their incredible journey. 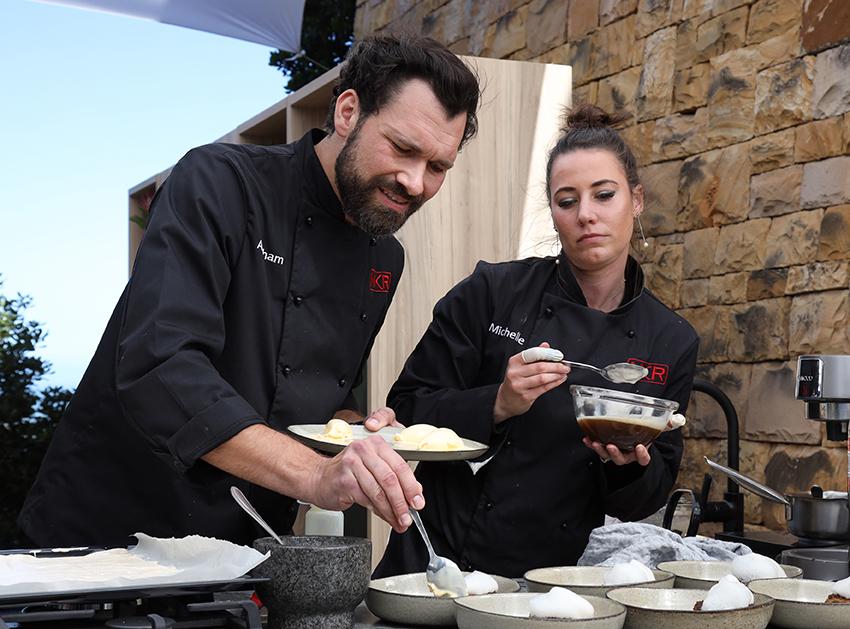 Has it sunk in yet that you are MKR season 4 winners?

No, not when you mention it like that. We think it’s going to take a long while. When we socialise it a lot more and walk in the streets and maybe people will say congratulations. It’s been completely overwhelming the number of messages, DMs, WhatsApps and phonecalls we’ve been receiving. It’s a magical moment.

We’ve been celebrating almost every Sunday for the last 10 weeks. On the night of the finale, we had a massive celebration with a viewing party of 50 people. We had lots of MCC!

Tell us what was running through your minds during your last cook in the MKR kitchen.

A lot of things. Number one was the pressure that comes with the occasion of the final. We’d made it that far which was our goal. Also, to try stay calm and not mess it up. As the cook progressed, we got a little bit more into our groove but in the beginning, the nerves were quite overwhelming.

It seems like you’ve got a lot of hours in the challenge and if you have to make 19 elements per plate and you really want to show some versatility and skill that you’ve learned then time goes by very very quickly.

And in the moment that your final score was announced?

AB just knew when they announced us last. He had a feeling and did the math. He knew we needed to get 5 or more to be a tie and then we got an 8 from Siba. So that just sealed the deal and it was really a massive celebration after that. 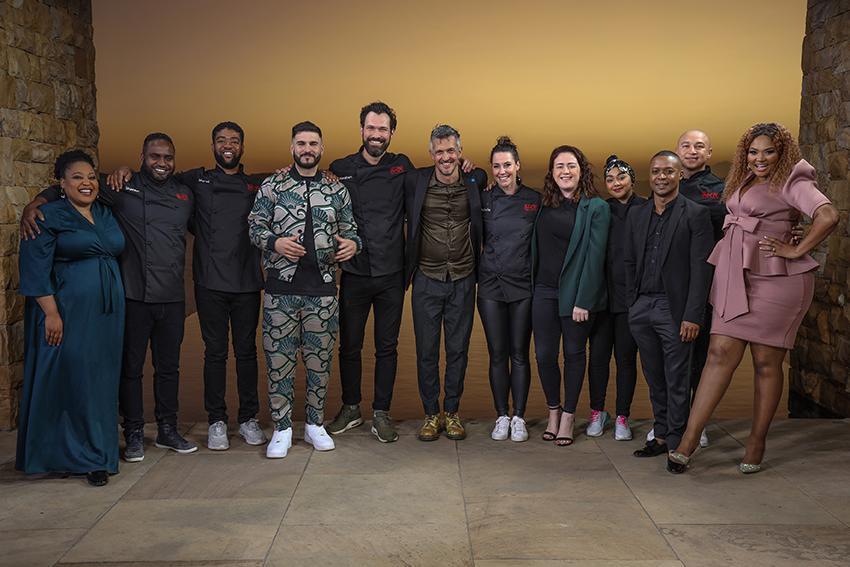 The question you’ve been asked over and over. What are you going to do with the R1 million?

Many things. We want to try and reinvest it into our foodie dreams if we need to. We’re hoping for someone to scoop us up to do a cookbook or cooking show. The other thing that we really want to do is go to the World Cup in France next year to watch the Rugby World Cup and then do a little foodie trip around that. The cookbook is something we really want to do. We have quite a cool idea because we actually enjoyed the process of coming up with recipes. Let’s be honest, every recipe around the world is kind of the same but you make it your own. Some of the conceptual dishes that we’ve done like the Pinotage Malva or the Brandy and Coke, really excited us so we want to look at all the recipes and seasonal produce. We think a lot of people will actually enjoy that and the way we cook and think about food.

What was your proudest moment in the competition?

Getting the highest scores in the instant restaurants for the South African franchise. For certain that was one of our highlights and then obviously winning. That gave us such momentum. We actually made a joke that we were in a cooking show but for four weeks we didn’t cook anything. All we did was eat. There was also the anticipation of being literally number 10. That built massive anxiety. Then to finally perform and do a lot better than we ever anticipated.

We said two things to one another. We wanted to score a 10 from one of the judges for one of the dishes which we managed to do. Michelle really wanted to be on top of the leaderboard which we also managed to do. That gave us so much fuel for the rest of the competition.

What memories will you carry with you from this experience?

We met some amazing people in the cast and crew. We also met some interesting characters in Wilderness as well. The big memory that we’ll take with us is definitely spending quality time together. We also had quite a cool experience in George where we did some training at the Academy of Francois Ferreira. We’ll always remember those little tips and tricks they taught us.

We would also go to each other’s rooms and debrief on the day. It’s actually mesmerising to think that we spent so much time on set that even offset we would still go to each other’s rooms or a restaurant close by. Our favorite thing was to unpack every detail over a bottle of champagne or red wine. We would go into the detail about every contestant and every dish as well as everything that we need to do and the recipes. 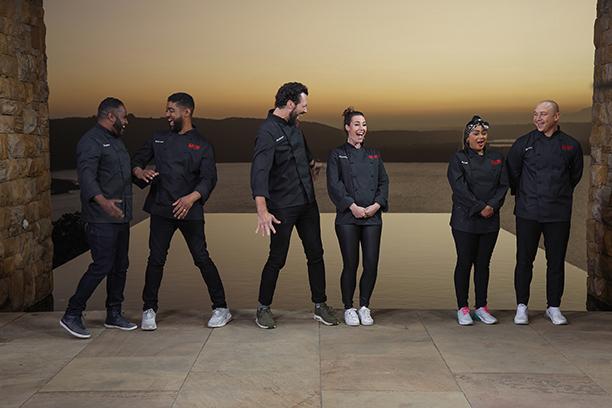 Tell us your favourite and scariest experiences in the finale and the competition.

The scariest was without doubt, the burger challenge. We were very lucky to survive that one. I think we stuck to the brief and that’s probably why we didn’t get eliminated. That was very scary. It shows that you can be at the top and then literally the next challenge you can be down at the bottom. If you have a bad day in the kitchen, it can really be the end of the journey.

The best part was making it through to the finale. We got through on very good feedback on our oyster challenge which we loved and then also on our vegan challenge. We came out top on both of those challenges and made it through to the finale on that momentum. Also, the locations they took us to shoot the challenges were mindblowingly beautiful and were places that we would never have cooked in our lives. Every single time it was just more and more incredible.

Where to from here for AB and Michelle?

First we’re going to have a holiday but we’ll never stop cooking. The night of the finale for instance, we had 50 people over and as much as it was daunting, we didn’t want to get a caterer because we are the caterers. So, we catered for 50 people and it came out exactly how we wanted it to. It was beautiful with abundant platters. That’s how we love entertaining people and having friends and family over and even people that we don’t know that well. So going forward that’s still something we absolutely would love to do.

We have a couple of ideas where we invite people over to come and sit at our tables where we can lay the table where they can have an experience where we talk about food. It’s very informal with food and new friendships.