According to Ipsos Global Advisor Inclusiveness Index, South Africa has been named as one of the most inclusive nations in the world – behind only Canada and the USA – when it comes to social acceptance on the basis of religion, immigration, sexual orientation, gender identity, political views, and criminal background.

Notably, while South Africans are near the top of the rankings when it comes to religion, immigrants and Queer culture Inclusiveness – the legacy of exclusion is still present, which means finding the freedom to be authentically and bravely you – is not always as easy as it should be.

To help normalise and celebrate the joy of inclusivity , NESTLÉ CREMORA launched the Joy of Inclusion campaign, which looks to deepen the conversation around inclusion – using real life heroes who’ve had to fight to fit in. This is one way NESTLÉ CREMORA is actively building good communities by playing an active and meaningful role to amplify the voices of the marginalised while driving actions that make a real Impact.

The Albinism community is one of the groups in South Africa that face discrimination in many ways. Persons With Albinism are normally socially isolated and have to live in constant fear due to misunderstanding of their condition.

NESTLÉ CREMORA aims to encourage South Africa and the rest of Africa to feel the joy of being inclusive. By doing so, the brand has recognized Mpho Mofokeng to represent the Albinism community in celebrating, feeling, and sharing the Joy Of Inclusion.

Mpho Mofokeng is a 24 year old from the Albinism community. She is a model, and TV presenter, who has built a name for herself in the beauty industry. Through her social platforms, Mpho provides everyday advice on skincare products suitable for her skin type which also serves as a platform to shift the perceptions by equipping people with knowledge that can encourage inclusivity.

To highlight the Joy Of Inclusion and spread cheer around inclusivity, Mpho has shared a few words on how people can collectively embrace inclusion in their everyday lives. She knows all too well what it means to stand out and sometimes be pushed aside. Despite this she has managed to craft a space for herself, where she can revel in her uniqueness instead… 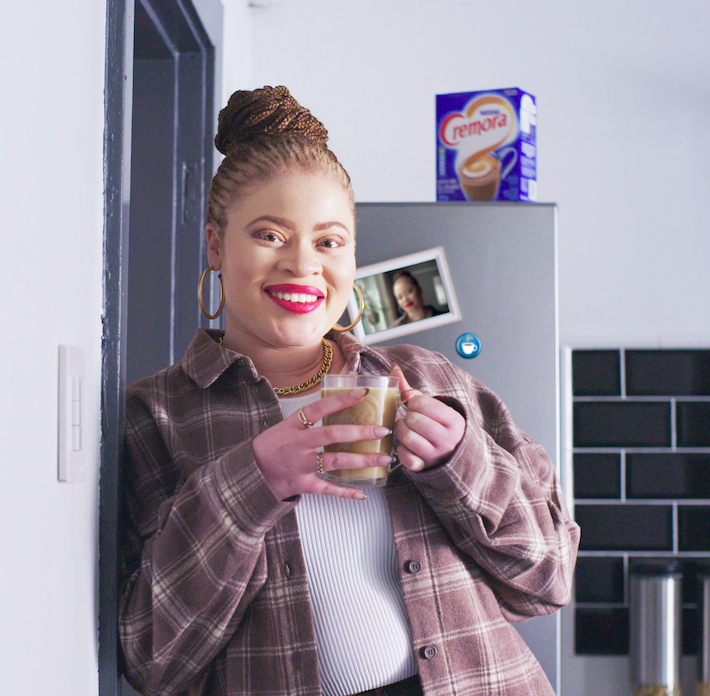 What does Joy Of Inclusion mean to you?

When I am able to be seen in a way that I would like to be seen – not just as my condition but seen as part of my community, part of the black people, part of women, and part of human beings in general. There is joy in knowing that you are included in the communities that we identify as, and that they identify us as part of them as well.

That is Joy Of Inclusion to me.

What would be the perfect world for people with Albinism?

The perfect world for me and other people with Albinism is a world where we can browse through a magazine and see an image of likeliness, see someone who represents us. And not only just representation but also being comfortable living freely, and not fearing that people will refer to you as a bad omen. Or call you names, but to be seen as an equal and human beings. So, a perfect world would be safety, presentation, and acceptances.

How can the persons with Albinism who still live in fear find their Joy Of Inclusion?

I would say that find your people because at the end of the day it’s not everyone that will have a good option about you and will see you in the way you want to be seen and perceived. You know that you are great, talented and you know that you’re more than just your condition and attract people that see that in you as well. Knowing that will make you more confident as a person and will kind of put blinders to people who are negative, and people who are adamant in not opening up & broadening their knowledge and minds.

What advice do you have for people who struggle to share and feel the Joy Of Inclusion?

Personally, I feel like if you focus on the negatives, that’s one of the things that you will constantly see and constantly be exposed to. I’m not saying that your feelings are not valid, but you have to get to a point of self-acceptance and believe that you are great. You will then attract likeminded people that embrace your uniqueness and beauty.

Who has been your greatest support structure?

My mother is a strong black woman who has raised her kids with such compassion, love, and selflessness as well. She’s strong without being afraid of being vulnerable, which is something that I admire most. She has sacrificed so much in life just to make sure that I’m able to be the woman that I am today – you know. I look back at her and I’m like “how do you do it? How do you just get up in the morning and face life the way you face it?” I’m sure she goes through things in her personal life but  just seeing it is so beautiful to me. My mom is a Mbokodo that isn’t afraid of being vulnerable which is what I love.

If you were a Superhero, what power would you have?

While things have changed considerably in Mzansi, Mpho believes inclusivity conversations such as the NESTLÉ CREMORA Joy Of Inclusion campaigns are vital to change perceptions and bring light to otherwise taboo subjects.