Having sampled some of the best crème brûlées on offer in culinary destinations as far as New York, Paris, London, Prague, Sydney and Bangkok, it has become almost an obsession to find the perfect interpretation of this classic French dessert. Back home in South Africa, after a decade of tasting, the standard of crème brûlée has sadly failed to impress. So when the opportunity to find the Best of Brûlée in Gauteng came up, the More Than Food duo – Darren Meltz and Gregg Pettigrew jumped at the challenge.

Essentially the decadent crème brulee is a simple dessert but one that requires every aspect to be perfect in order to set the taste buds alight. It is one that is also easy for even the most experienced chefs to drop the ball on – a crust too thick, a custard too runny, a scrambled mixture – without real care and precision the result could be disastrous. However, when perfectly executed, there surely is no other dessert in the world quite like it.

Throughout the month of January, we indulged in 11 crème brûlées and the results (in the order they were tasted) are in!

A traditional vanilla custard brûlée, with a beautifully executed thin caramel crust, served with a lovely rich world-class piece of shortbread. The presentation of this brûlée is simple and chic and makes you want to dive in immediately. The crust was close to perfect and upon cracking the velvet filling oozed through. The initial taste delivers a very subtle vanilla which rounds off the sweetness of the crisp crust and is beautifully complimented by the richness of the shortbread. This is an excellent brûlée and will certainly leave you wanting more. 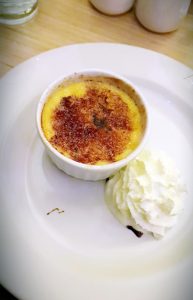 The menu describes this brûlée as a dessert to tantalise your taste buds, unfortunately its poor presentation was not so tantalising. Served in the traditional ramakin with a simple whirl of cream on the side (certainly not the most appealing accompaniment for a brûlée). The crust was a little thick and loose on the brûlée which made the first crack less satisfying than what it should be. The Amarula infused custard somehow lacked the intended flavour. Instead a very strong flavour of egg came through and the custard was rather wet and loose. Overall this crème brûlée was not only visually unappealing but also disappointed in its taste, leaving our preconceived poor notion of South African brûlée well intact. 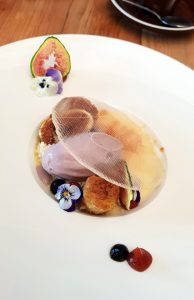 They say that we eat with our eyes and this was certainly the case with this immaculately presented half brûlée – served with crunchy fig crisps, red wine ice cream, olive oil croutons and a sugar glass disk. The crust was close to perfect as it cracked into tiny shards revealing a rich, velvety vanilla custard that was so full of flavour. With what appeared to be an extremely complicated execution of a simple dessert with so many elements, made us initially sceptical as to whether they would all come together in harmony but boy did it deliver. A simply outstanding brûlée that delivers on taste, presentation and all the essential elements. 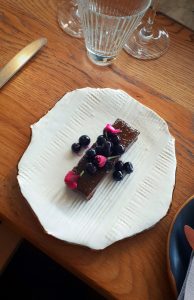 Whilst there are many ways to execute a crème brûlée and many different flavours to use to enhance it, the essence of a crème brûlée, is the custard. So when this chocolate brûlée arrived at the table in the form of a very decadent and attractive looking slice, we were rather intrigued. The menu describes this as the silkiest chocolate brûlée served with pickled berries. It must be said that the flavour combinations are beautiful and create a very pleasing dessert. The hard crust was well executed but simply put this is a little too far removed from what is expected from a brûlée. The filling is more of a rich chocolate mousse on the palate. You’ll need to look past this not being a traditional take on a crème brûlée and enjoy it as a decadent and well executed chocolate dessert. 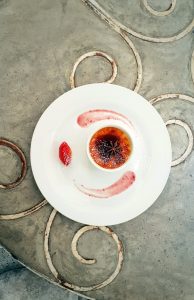 The description of a star anise crème brûlée immediately had us excited with its very inventive flavour profile. The brûlée arrived, elegantly presented but with quite a thick crust that took a good number of whacks to crack. Sadly the next disappointment was that underneath there was no sign of a velvety custard but rather a mixture that was more like scrambled egg. The mixture had been added to the eggs whilst still too hot resulting in the scramble. The star anise flavour also did not come through at all and we were left disappointed by the overall experience. This brûlée did have the potential to be great, had it been executed properly. 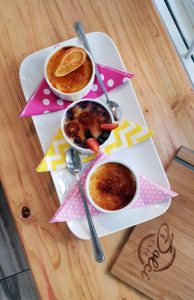 A trio of brûlées that looked just beautiful in their simplicity. However it’s only fair to critique only the one currently on the menu. A traditional Amarula crème brûlée which certainly delivered on the Amarula and on its description of being a different take on an old classic. The caramelised crust was beautifully thin and cracked under the first tap. This brûlée was full flavoured and completely decadent. The biggest criticism though was as one got deeper into it, it became overpoweringly rich, with no side accompaniment to break the sweetness. That said, this rich brûlée will satisfy even the sweetest tooth’s need for a fix. 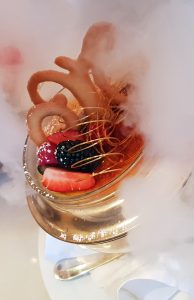 With us both being thespians, the presentation of this dessert was like being in the front row of Les Cage Au Follies on Broadway! From billowing smoke to fine decoration on top, this crème brûlée was an experience before even taking a bite. Once all the smoke had been stripped away it was time to get down to the naked truth. A berry vanilla crème brûlée served with a berry compote and biscotti. The crust was delicate but just a little too scorched creating just a tad too much of a burnt flavour.  Underneath was a rich custard with strong vanilla undertones perfectly complimented by the light acidity of the berries. The biscotti took just enough of the edge off the sweetness. The spectacle and taste of this brûlée will leave most diners raving. 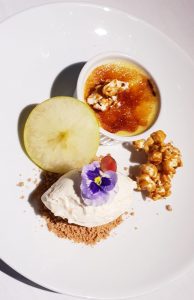 One is always a little sceptical when something simple starts to sound too complex. A citrus brûlée infused with orange zest and lemongrass, served with nougat ice cream on a bed of white chocolate crumble and compressed ginger apple. However the elegant presentation combined all elements seamlessly. The crust was extremely thin and absolutely perfectly executed. One mouthful and it was clear that the complicated flavour profile had been executed with such skill and finesse to create something truly special. This crème brûlée was world class and left us feeling completely satisfied. It was tough to find a fault with this brûlée and it is a must try for any crème brûlée connoisseur. 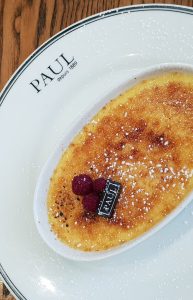 Simply described on the menu as a rich vanilla crème brûlée, it was hard to argue that this was anything but. Served in an oblong dish, with a small chocolate and berries, this was one very large and tasty brûlée. The crust was thin and nicely hardened creating just enough crunch to add to the rich smooth custard. With a brûlée this size there is a need for some kind of accompaniment, just to break up the richness and sweetness. The berries and chocolate however did not provide enough of this. Overall this is a well executed brûlée which delivers richly on traditional flavours.

The menu described this as a traditional vanilla brûlée and that is exactly what it was. A strange choice though to serve this dessert in a standard coffee cup with no side accompaniment. The crust was a little on the thick side but did have a burst of burnt caramel flavour. Underneath this hard crust, was a filling that delivered on strong vanilla notes but was slightly on the runny side. The flavours combined nicely and this was certainly a brûlée that any dessert fans would enjoy. 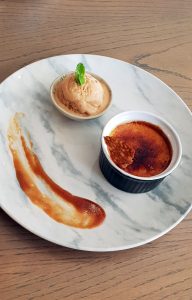 A coffee crème brûlée served with daring salted caramel ice cream. This brûlée was always going to be interesting. An elegant dessert decorated with a thin wafer and mint leaves. The crust was nice and thin and cracked easily to reveal a custard rich in coffee flavour but slightly on the runny side. The salted caramel ice cream was great accompaniment to the flavour making this is a lovely brûlée to round off a meal or as a dessert with a good cup of coffee.

In a challenge such as this, it’s the smallest details that make the biggest difference and coming out tops is no mean feat. After much deliberation the title of Best of Brûlée belongs to Priva with Coobs and Van Der Linde as runners up.

More Than Food’s Best of Brûlée

A huge thanks to all those who participated in our search for sweetness. We look forward to returning soon to try more of your decadent creations.