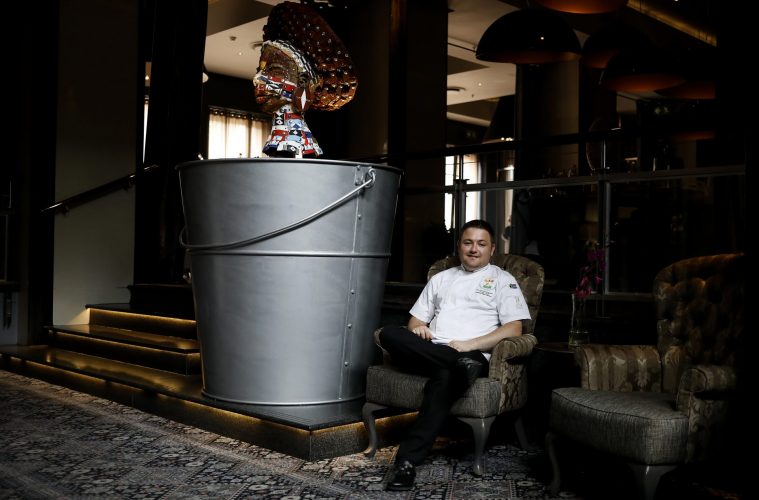 Cheffing is a calling rather than a career for Adrian Vigus-Brown – and as living proof, he has the enthusiasm and the passion for his craft, he’s put in the hours, the hard work, and the practice, and he has achieved an enviable array of achievements and accolades, all within a relatively short period.

Chef Adrian, aged 30, is Executive Chef at the glamorous African Pride Melrose Arch, Autograph Collection® Hotel in Johannesburg, which has the March Restaurant, the Library Bar, pool deck, 118 rooms with 24-hour service, as well as five meeting rooms and an auditorium.

He achieved the position of executive chef at age 25, which added more challenges to Adrian’s career than anticipated. “I have been passionate and driven since I first fell in love with the world of food as a child, preferring to be in the kitchen when other kids were playing, and watching food channels on TV rather than the normal programmes my friends were watching. On a family holiday at age nine, I was found in the hotel kitchen, firing a string of questions at the executive chef. I knew it was the place I wanted to be. In high school I worked in restaurants and did private catering. “When I was appointed executive chef, I found I constantly needed to prove myself and my worth in the kitchen as fellow executive chefs often underestimated or overlooked me. But that helped me hone my skills further – and I soon learned to live out the quote by Tony Robbins that, ‘people are rewarded in public for what they have practiced in private for years’.”

Adrian loves his work at African Pride Melrose Arch. “The senior management has faith in me and supports me. They give us creative licence – knowing we will use discipline and responsible management in our meal and menu development. We also have opportunities to take in a bucketload of young trainee chefs every quarter, sharing our knowledge and passion with them and inspiring them on their culinary journeys. This is an environment of growth.”

Hailing from the East Rand, Adrian matriculated and joined the in-service apprenticeship programme at Starwood Hotels and Resorts, Sheraton Pretoria, completing his exams at HTA School of Culinary Art and later adding a City & Guild Level 2 IVQ Diploma in Food Preparation and Cooking to his education.

While in high school he worked at High Chaparral Steakhouse in Boksburg and at Carnival City, and then Sheraton Pretoria Hotel when his tertiary training started. Other career moves include Buccament Bay Resort in the Caribbean; DW eleven 13 fine-dining restaurant in Dunkeld, Johannesburg; Royal Mnandi Food Service Solutions in Centurion; Nedbank West Street on the East Rand; Rand Refinery; then joining African Pride Melrose Arch as Senior Sous Chef in April 2014.

He lists some of the lessons he has learned along his career path as:

He describes his culinary style as “ever-changing. I’m not set on any one style. I’m classically French trained and am more refined in my style, but, as in all things in life, trends and options change, and my culinary style does too.” This also means that his signature dishes are always changing. “But at the moment I love slow braising and really rich food.” Underrated food for him is the part of the animal that isn’t ‘popularly’ shown on TV – using the animal ‘from nose to tail’ rather than just the best-known cuts and discarding the rest. “This is rare, but it needs to change, and it is a challenge I constantly set for my team.”

Adrian’s favourite food to eat is anything made with passion – except fish or seafood.

Reflecting on the South African culinary industry’s future in the face of the COVID-19 pandemic, Adrian believes that “the logistics of cheffing, costs, products, locality, seasonality and affordability will change, and chefs will need to do a lot more with a lot less, while keeping the public happy. Also, with so many chefs being unemployed as a result of the pandemic, it is industry’s responsibility to keep a vulnerable and stressed community safe. We do face major obstacles, and we need to overcome them together and in one piece.”

Nonetheless, there are opportunities for young chefs in South Africa because “everyone needs to eat, and everyone wants better food.” Adrian says opportunities will exist going forward but finding them and achieving success will be much harder than it has been in the past – but it won’t be impossible. “As chefs we must set goals, find mentors, get help if we become discouraged, and learn to find solutions to our challenges.”

Adrian is a firm believer in volunteering and industry involvement. He has been a keen participant in the World Chefs Tour Against Hunger for several years and is active in SA Chefs Association. He was recently re-elected to the board of directors of SA Chefs. For his second term heading up the culinary portfolio, he has strategic plans to implement impactful programmes, including mentorship programmes and restoring the SA Chefs competitions to their former prominent status.

In April this year he was appointed to the management team of Chefs with Compassion as national administrator and logistics coordinator. He explains, “There were many good reasons to join Chefs with Compassion. I’m committed to volunteering, and I cannot bear to see food wasted. It would have been unhealthy for me to do nothing or very little during lockdown as I have a normally very busy mind, I am in a position to use my management and culinary skills, and looking at the bigger picture, I am helping people in desperate need. The choice was obvious.”

Adrian’s awards and achievements include