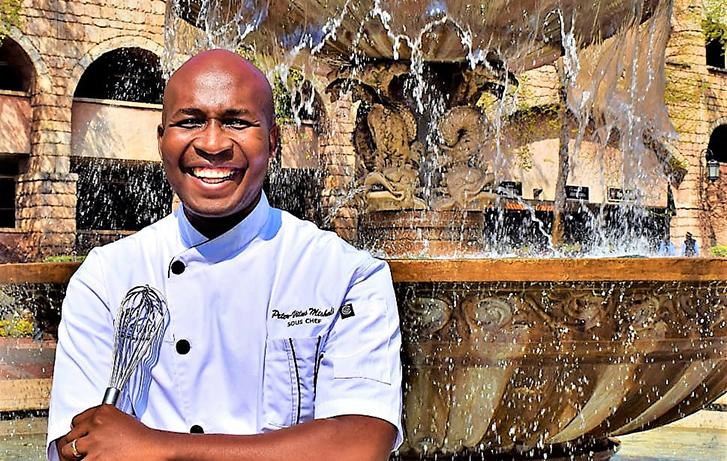 A genuine South African homegrown treasure, Chef Peter grew up in the heart of the Zulu tribe homestead-Ulundi, KwaZulu Natal. It is said of him that he loved food from the day he was born! His encounter with food started at the tender age of 9, where his two younger siblings became his first culinary customers, not out of choice, but as part of his duties at home. Peter had a very traditional and strict upbringing, both his late parents were educators with a no-nonsense approach to parenting, earning themselves the “German hands” nickname from their boys. His strict upbringing and love for everything food is what set him off on his impressive culinary journey. “I am who I am because of the “German hands” from my parents, they taught me to be humble, respectful and always being gentle, aware of my surroundings, and doing everything with pride which now translates in my approach to preparing dishes” says Chef Peter. He graduated from the Durban University of Technology in 2005 and has been creating delicious meals for over 10 years. One of his proud chef moments was when he cooked for royalty, the Prince Albert of Monaco’s wedding in 2012.

Some of his achievements are being the Uniliver food solutions National Finalist 2007as well as the Gauteng Regional Finalist 2019. His ability to be flexible and calm under stressful situations in the ever-changing environment of the hospitality industry, his passion about service orientation and delivery no doubt makes him one of South Africa’s favourite and a hidden gem.

When asked about his approach to food, “Fresh is best, keep it clean and simple, season to taste, try to make the most of natural flavours and try to enhance them. Don’t overpower food when it has so much to give” says Chef Peter.

“I am constantly striving to produce the best food with the skills and expertise I have learnt through my experiences from some of the great chefs who had taken the time to teach and mentor me. I choose to have the same vision and occupation that was given to me by sharing, mentoring, and having an open communication policy with all my colleagues”.

We asked him what his favourite dish to make is? His response was–he loves every second he spends in the kitchen. Chef Peter is currently creating culinary excellence at one of the big casinos in Johannesburg.This hidden gem is not only a creative, but a visionary. He sees a future with a restructured education system for future chefs and the hospitality industry. Owning a Boutique Hotel, boasting an exclusive African dining restaurant is not far out of reach for this homegrown treasure. One of his strongest influences in life has been chef Rudi Liebenberg, Executive chef at Mount Nelson, Cape Town. Chef Peter absolutely loves cooking for his beautiful wife & daughter when at home and is an avid runner. One of his passions is writing and sharing cooking recipes, which has inspired him to write a cooking book, featuring some of the best African recipes passed down from generations.

For funsies, we asked chef Peter what he would do if he could not work as a chef? Mathematician was his answer, which only goes to prove that culinary excellence is not only an art but a science.