Ginfusions at The T Room Gin Bar, Hoi An

Nestled in a quiet neighborhood in back-alley crossroads, The T Room Gin Bar stands out, the dark blue fence obviously new around it’s quainter surroundings.  Inside, intimate candle lighting and marvelously overstuffed sofas and lounge chairs await you, ready to cradle your booty for as long as you’re willing to keep sipping.  Here’s my review of their six ginfusions:

So, if you’re wondering what a Pomelo is – it’s a citrus, not unlike a grapefruit, but with a milder taste.  Served with strips of vanilla and a piece of pomelo fruit inside, Vanilla & Pomelo has a mildly citrusy taste, with a warm rush of real vanilla.  My first sip transported me to a beach in Tahiti – the vanilla so rich and tantalizing that it was almost naughty how much I wanted another taste.  My mouth is watering thinking about it now, because it was sweet, but not too sweet, and I still got the slight bite of the gin underneath it all.  Exotic is the word I would use – both exotic and comforting.  This one was my personal favorite, so give it a taste. 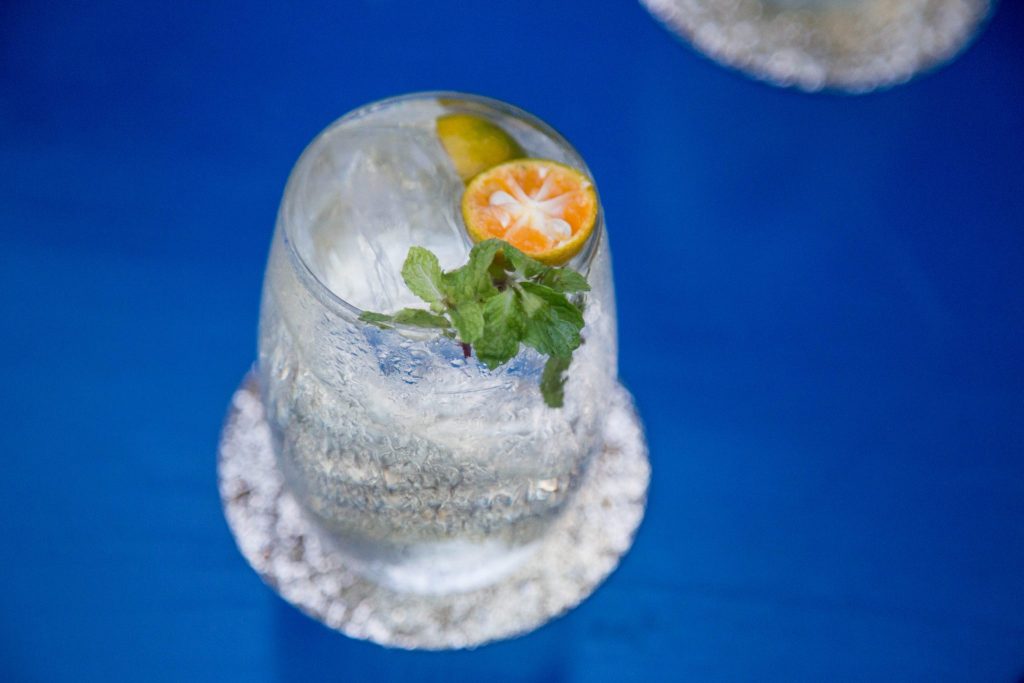 The kumquat ginfusion provided a tart taste that acted counterpoint to the gin’s flavoring, one that punched my taste buds in their metaphorical faces, leaving a delightful tingle in the wake of its tart fruity goodness.  To be honest, I’m not sure I could identify a kumquat in the market, so I’m not really familiar with its taste.  To be embarrassingly honest, I confused kumquat with a prune initially, and assumed this ginfusion was going to be a perfect delivery for the old-person food.  Either way, I was surprised by the taste, and wound up ordering another one, it was that good.  I personally enjoyed this concoction with soda water versus tonic, because the bitterness of the water really heightened the flavors within.

Okay, truth be told, I was a little apprehensive about this one.  My encounters with rose flavored anything in the past has always left my tongue feeling like I sprayed perfume directly into my gin-hole.  And Cardamom?  Those little seed pods that I inevitably bite into when I’m enjoying one of my favorite Indian curries?  Suspicious… very suspicious.

However, this ginfusion BLEW.  ME.  AWAY.

The taste was like a breath of fresh air over my tongue, but not too overpowering.  The flavors were perfectly balanced, and created a taste so unique and refreshing, I immediately needed to order another one.  This was my second favorite drink – it was refreshing and something, dare I say, new and intriguing. 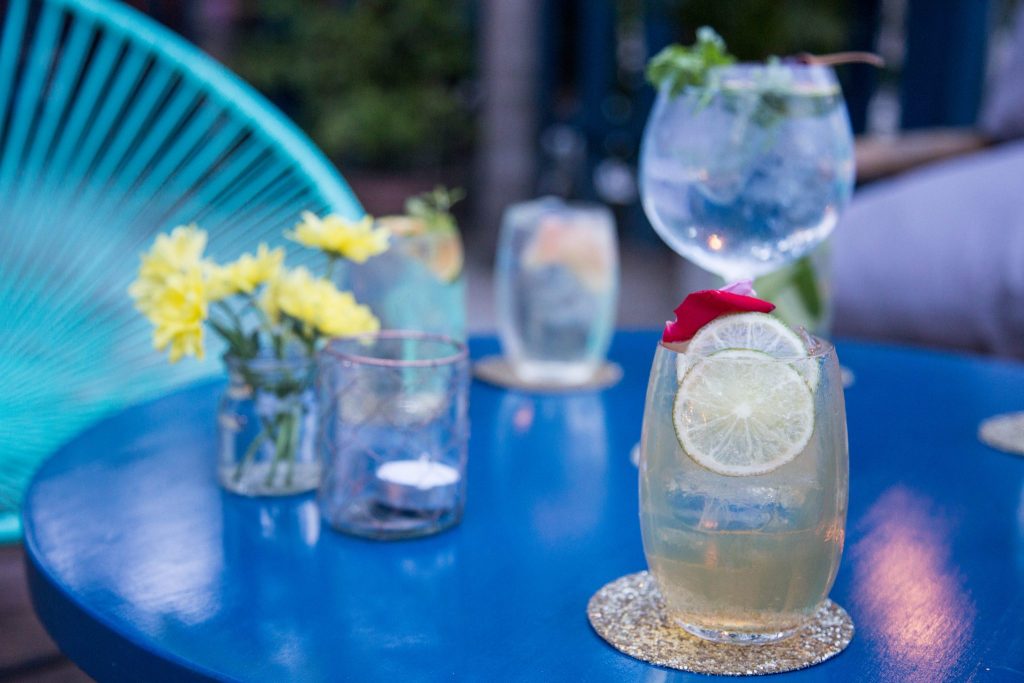 I have a friend who loves infusing vodka with tea, so when I saw that Kate had done it with gin, I was stoked. I’d always enjoyed my friend’s tea-based concoctions in the past, but after tasting Kate’s Chamomile infused gin… I’m sorry Becky, but you’re going to have step up your infusion game.

Because that drink was incredible.  Look – I’m not saying that I don’t imagine myself as a posh British lady when I do get around to drinking a cup of tea, but I’m also not not saying that this drink made me fell super regal drinking it.  The chamomile mingled with the juniper, creating a unique flavor profile that I’m not entirely sure how to describe, but was very, very good.  Good enough to even affect a swanky British accent while I drank it.  Basically, it made me feel classy AF.

Okay, disclaimer – I am not the biggest fan of cucumber/gin combinations.  I get that it’s a thing, but… no.  Just no.  The flavor, for me, would be akin to drinking sweaty bath water – that’s how much I hate those two combinations of flavors.

I don’t know exactly what it was about this one in particular, and I don’t know if it’s some sort of magic that Kate possesses, but the cucumber taste was so mild, it was more of a delivery system for the black pepper, the two flavors mingling together while not being overpowering.  It was crisp and refreshing on my tongue, and I found that out of all of my ginfusion tastings, this one was the most satisfying for making me feel cooler in the warm humid night. 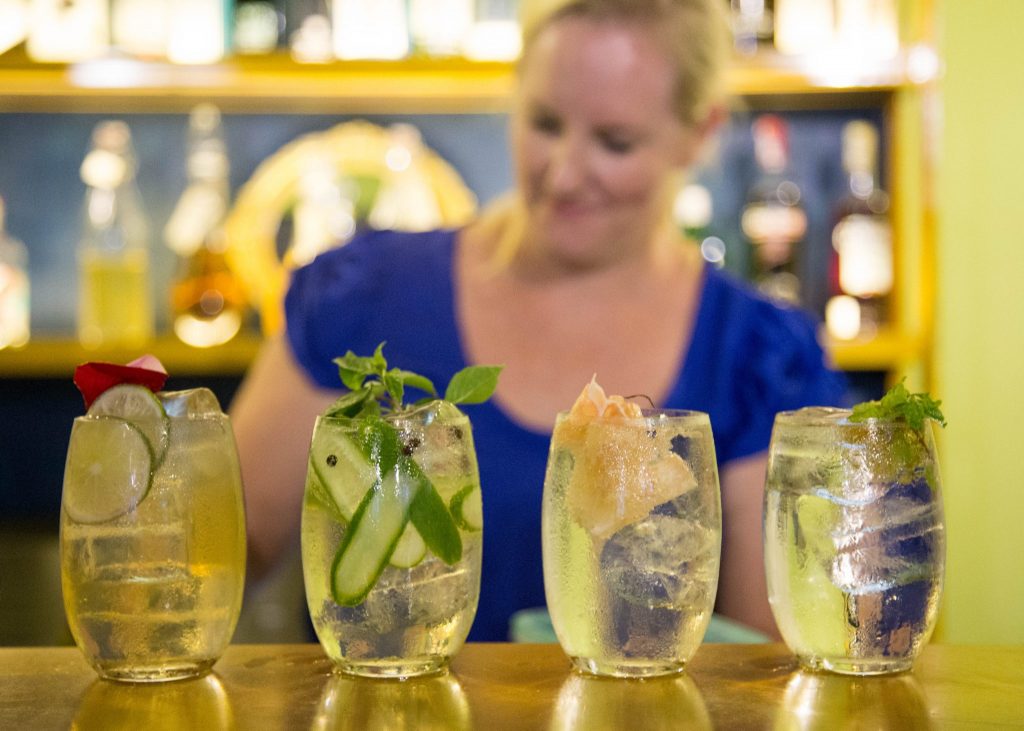 Don’t know what a lingon is?  That’s okay, neither did I, and I’m living in a place that sells them nearly year-round.

Basically, a lingon is similar to a lychee.  It has a smooth brown husk, that cracks open to reveal a pale pink fruit inside.  The flavor isn’t as strong, but it is sweeter, in my opinion.

And including it with lime was a genius choice, on Kate’s part.  It was sweet, but with a hint of sour that helped keep the sweetness under control.  In this one, the flavors really enhanced the gin, so I got that nice subtle bite of juniper the whole time.  Of all of the drinks, this one was the most refreshing, and I highly recommend it.

Find these drinks and many more at The T Room Gin Bar in Hoi An, Vietnam.

Inspired to make your own cocktails? Check out MTF’s cocktail recipes and mix ’em up at home!