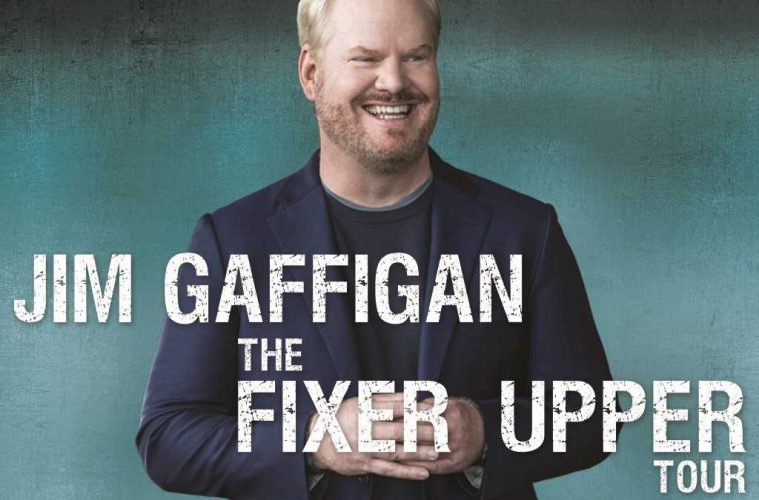 This festive season Joburgers and Capetonians are in for a real feast of laughs!

I caught up with Jim ahead of the SA leg of his Fixer Upper Tour to chat about all things from life to laughter.

Let’s go back just a bit. Tell us about your first standup gig. What lessons did you take away from it?

Oh my gosh. My first stand-up gig. I attended a seminar thing or I don’t know if you could call it a class or something. I had incredible stage fright but I always knew I wanted to be a comedian. I did this thing where you performed in front of friends. I remember a feeling of empowerment, a strange almost sense of control the first time I did it. That kind of shocked me in a way. I was in my early 20s and I didn’t assume that I would gain any level of success or make a living from it but I knew that I had to continue doing this. Once you do it you’re like, “Oh. I should have done this a long time ago.”

What have been your proudest and scariest moments? How have these impacted your comedy?

You know it’s weird, I don’t know if I’m that in touch with raw emotion. So I think I look back on hindsight and see what my proudest moments are. In the grand scheme of things, being a parent is the most important thing. My wife having a brain tumour was the scariest moment for me because life and death is what it’s all about. I would also say that probably my mother’s death indirectly was what prompted me to adopt this idea that you only get one time around. All these social norms are kind of created by other people for other people. Then when my wife was diagnosed with a brain tumour, I had to face the fact that in all likelihood the priority would have to be that as a single father of five kids, my career would be something that would have to disappear. So when she got better I had a new gratitude as to what I could do with my life.

Food and fatherhood play a great role in your work. Tell us about the strangest experiences you’ve had with both.

It’s interesting, the fatherhood thing prompted me to write this book, Dad Is Fat. Fatherhood is such a strange part of a man’s life. You’re so vulnerable and also so non-instinctual I think. People can identify with the role of a father. The maturity, the responsibility and vulnerability. It’s something that I think men struggle to understand. Men are kind of thrust into this assignment. It’s weird because I’m certainly not an expert on any of this but from my personal journey, becoming a father is the most terrifying, confusing and rewarding thing I’ve experienced in my life. I’m also aware that it’s something that’s very hard to do.

I love doing international shows and I’m excited to do shows in South Africa. So it’s the submersion in another culture that gives you a glimpse at yourself but you also get a glimpse of how different things are there. Food plays such a heavy influence in a culture. Whether it be eating reindeer in Scandinavia or eating sheep head in Iceland, it’s really easy to dismiss it as an oddity but it informs some history. I’m completely ignorant about South Africa but I’m excited to be exposed to that because you can learn about history through food.

You’ve shared the screen with some really big names. Can you share an interesting story or two about some of these co-stars?

The thing that I find so fascinating and this doesn’t apply to the actresses but more to the actors. There’s usually an intensity to the actors. I get along with guys like this. That Type A type of guy. It reminds me of high school sports. There’s the guys that are so intense. That was so important for the team. There is a universal Type A among these big leading men; there’s a fire in their belly. I’m ambitious and I’m driven but I remember working with Liev Schreiber and he had to do this boxing scene where he was punched in the face like 40 times. That night he was drinking vodka and I was like, “You probably shouldn’t be drinking.” He was like, “No it’s fine.” That level of intensity is just intense. I mean that as a compliment. I’m also glad to be the man I am but there’s this energy there that is uncharacteristic of most of the population. That also applies to Alec Baldwin, Kiefer Sutherland and numerous other guys in the business. It’s an intensity that the rest of us encounter in moments that they exist in.

You’re a father to five awesome kids. Any more on the way?

I wouldn’t turn down another one but I would be worried if my wife got pregnant again. Being the father of five, I would find it hard to be opposed to another one but I’m also tired. There’s not a single one of my children that I’d be like, I’d give this one back. With each one there was the opening to a whole other world that I was completely unaware of.

With a family of seven, holidays must always be an experience. Tell us your favourite holiday memory.

Being a traveling comedian, that’s where I make my living. I love traveling and it’s one of those things that became apparent to me that there was this value in it. There’s first-hand experience vs reading or talking about it. This summer I took my kids to Europe and we spent a week in Ireland and it’s interesting what each kid attaches to it. I did a show in Athens over the American Thanksgiving and my kids were on break so they came to Athens. We did this submerged Greek history tour. Understanding mythology by standing outside The Parthenon is amazing. We made a decision a while ago that instead of having a country home, we were going to travel. It’s been amazing. I also feel that as an American I want my kids to see the world as much as they can.

We have some interesting delicacies here in South Africa. Which have you heard of and which are you longing to try out first?

I haven’t done major research. I’ve Googled a bit on the internet. Even in the States, this is what I like to do. I like to ask a cab driver or a bellhop, if they were gone from Joburg for six years and then came back and were only allowed one meal, what would it be? It wouldn’t be the fanciest meal, it would just be something that captured their experience of living in Joburg. I do that so I can avoid chains or fancy restaurants. I know that there’s high culinary restaurants that are amazing but I want the reindeer stew. In reality I’m not even that adventurous of an eater. I do like to try things at least.

If you could make a dish that sums up Jim Gaffigan, what would it be and what would you name it?

I have this love affair with different types of food. I have a deep love affair with Mexican food, Thai food and Italian food but I would say that I’m a meat and potatoes guy. I’m from the Midwest and in the end a burger or ground beef is really what it’s all about for me. I wish it was more glamorous but a beef stew or a steak is all I love. My dish would be called Nap because that’s what I’d want to do after it. A great meal and a nap is all I want in life.

What made you decide to include South Africa as one of the stops on your Fixer Upper Tour?

I’m so excited and I mean who wouldn’t want to go to South Africa? I’ve traveled a fair amount and I almost get a sense of jealousy when I tell people I’m going to South Africa. I’m almost reluctant to bring it up because I feel like the whole idea of South Africa is so fascinating to people. It’s so far away from us and you never want to be the travel bragger. You’re doing it for yourself and you don’t want to make someone else jealous. Africa is such a cool idea, I’m embarrassed by the opportunity.

You can catch Jim live on stage on Friday 28 Dec at the Teatro at Montecasino, Johannesburg and Sat 5 Jan at CTICC Auditorium 1, Cape Town.

Tickets from R325 from Computicket