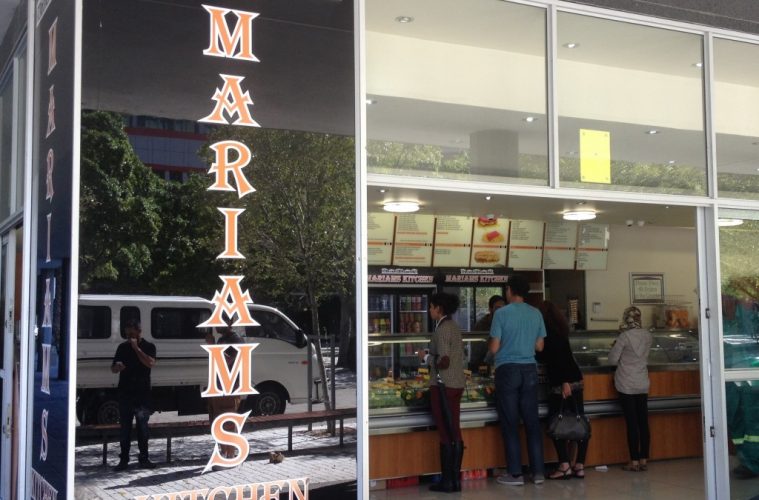 Typically, when I walk into a restaurant, all of my senses are awakened. My eyes dart around trying to get a glimpse of what the other customers are eating, simultaneously peering over the counter to see what is being freshly prepared. If the menu is visible, it will be scanned as I dismiss things tasted before or that don’t excite me and lock onto a dish that sounds unfamiliar and exotic. When entering a restaurant that serves ethnic street food – I don’t care that there are random art prints of London on the wall (despite it being an Indian food spot). I also don’t care that in the same glass cabinet that they display meat pies and samosas, they also sell glossy, Muslim women’s magazines, interspersed with chocolate muffins. I actually find it endearing and comfortingly unpretentious that the chiller cabinet boasts rows of sparkling phone covers, for sale too. Similarly I am nonplussed by the fact that the sausages, pictured above the counter, are an unappetising hue of fluorescent pink. One can sense when these extraneous details will not be used to assess the food.

Having grown up in London, I have been spoilt by access to the greatest expanse of ethnic cuisine and the bounty of flavours that rise out of the kitchens across distinctive communities. The best jerk chicken outside of Jamaica will be found down in Peckham, a banquet of Turkish fare is a Sunday ritual in Green Lanes and there is a vibrant debate to be had on the streets of Hendon about whether one’s bagel should be poppyseed or plain. In these pockets, food speaks to me, it tells a story, has relevance and an historical context. It is intellectual, mindful consumption and while London has food from all corners of the globe, Cape Town has a unique, post-colonial, hybridised population with food to match its political complexity.

Until arriving in January, I had thought the term ‘Coloured’ was an insult. An indeterminate category that essentially placed anyone that was neither ‘black’ nor ‘white’ in the same classification. On a few occasions I have been asked myself whether I was coloured and as I increasingly met people from the community, conversation inevitably turned to food. When I said ‘I love Mumbai Café in the Bo-Kaap’, I was laughed at, my opinion discounted – as I learned that despite my culinary explorations, I was still a tourist.

‘But have you ever tried a Gatsby?’… Ali, my Indian friend who lives in Athlone had sparked my interest.  He explained the history of this eminent dish and while a visit to the Cape Flats was a slightly ambitious endeavour for a Monday afternoon (can’t cycle there), I was told Mariam’s Kitchen on the Foreshore, produced a close contender to the first Gatsby, originating from Super Fisheries on Klipfontein Rd in the 70s.

So the Muslim women’s magazines and books are at the very front counter of Mariam’s Kitchen because [she] the restaurants matriarch and mother of the current owner, Shah, wants them there. I also learn that Shah’s brother has a business selling bejewelled, phone accessories and, irritated by customers coming to the house to buy them, he generously agreed to clear a cabinet. Family, heritage and Muslim culture are at the core of this food business and secrecy too, as my questions about recipes are deflected by a tour of the prayer room (and shiny new toilets).

Leaving my friends to do the ordering, I sat down in the newly renovated dining area (later I would be asked by the owner to comment in detail on the furnishings, ambience and aesthetic of the space), and snacked on half-moons and samosas until the much anticipated Gatsby was delivered.
While waiting, I interrogated Shah on the nuanced differences in the Coloured communities and he explained to me that his family had come over in the Mid 19th Century, from the Konkani region in India. It was common for these people to step off the boat and open food businesses in their new world. They didn’t speak the language, but many had come from professional backgrounds at home so it was the most desirable and democratic entry into business. Food is both a currency and tool for communication.

As the gargantuan sandwich was delivered to the table, it made me feel like we had entered a Man vs Food challenge. Almost the length of my arm, the sandwich was laid in front of us on a silver platter like a ceremonial hog. Bread, meat and chips – a combination that appeals to a universal palate but takes on a different meaning depending on the context. To me, this is an indulgence, a novelty, I LOVE gross food, extreme combinations and gluttony but this food, in the community in which it was born, is worker grub – providing a high carb and protein rich meal at an affordable price. I then learn of the cult status of the Gatsby – ‘you have to unwrap it and eat it from the car-bonnet while passing around a big bottle of pineapple lassi with shared straws’. I take a sip of the sickly sweet, neon yellow liquid and start to feel like a proper local.

Holding off on attacking the sandwich, I had to deconstruct it to make sense of the layers, steaming and oozing with an intensely, herbed aroma. The bread is freshly baked, soft, like a giant American hotdog roll. It contributes no taste but absorbs the hot, spicy sauce and holds the sandwich together without leaking or falling apart. There is a nondescript layer of shredded lettuce and fried onions but later, when all that is left on my plate is salad debris, I taste the most perfect imitation of Mc Donalds Big Mac sauce (delicious). Shah dismisses this comment.

We opted for Masala steak with BBQ chips, egg and cheese (no holding back on trimmings). All questions to Shah regarding ingredient sourcing, cooking process and details of the spice mix were shut-down by exclamations such as ‘look how clean the floor is!’ and talk of their menu expansion ‘we have a health juice bar’. This man is so animated, extravagant and clearly ambitious that listening to him was distraction from my sandwich autopsy. The beef was like a thinly-sliced brisket, so succulent and with such depth of flavour. The chips had been fried to perfection. Piping hot and encased in an aromatic shell, dusted with BBQ spice straight out of the fryer. The perfect rectangle of fried egg (how do they do that?) and cheese, had fused to the top of the sandwich, offering some textural diversity but not much else. It was surprisingly delicious, and for me, ticked all the boxes. I have quite simple parameters to which I judge a dining experience and at Mariam’s, the environment, company, conversation and food all contributed to a holistically pleasant experience.

A Gatsby is a truly social meal – quite like no other. It is designed to be eaten messily and shared among friends. As talk turns to the next venue on the agenda, I am told that a REAL authentic experience is to be had at Wembley Roadhouse in Athlone where people pull up their cars and receive American ‘Drive-In’ style service. Food is an integral component within the socio-political complex in South Africa. I learn that places like Mariam’s, that started 25 years ago in Salt River or Wembley Roadhouse that has been going for 40 years, are central to the cultural identity of the community. An unrelenting loyalty, Post-Apartheid, born out of the fact that in the past, there were restrictions about where different groups were allowed to eat. That sense of community reigns so true at Mariam’s, as I glance out the window and see a line of 30 – 40 workers queuing out the door. Shah explains that every day they distribute the leftover bread and chips for them to eat. Touched by this, Shah quickly reminds me that it is evidence that ‘EVERYTHING IS FRESH!’

I finish the last bite of my Gatsby and Shah asks me if I have ever tried a Salomi. ‘ Yes yes I love the mutton salomis at Zorina’. He raises his hand, seemingly outraged. ‘You must come back tomorrow for one of ours, ON THE HOUSE’!

I do go back, and yes the steak salomi was excellent. A freshly fried, hot, flaked roti wrapped around a generous helping of beef curry, washed down with a strawberry smoothie (he insisted I sample their health juice bar). So Shah has earned my loyalty. Good job. I <3 Mariam’s and with a menu of 100+ items (and growing), there will always be a new experience to be had. With accusations against me of still being a tourist in Cape Town a trip to get fed in the Flats is imminent. Watch this space.

NOT THE SAME OLD STORY For the Exclusive Books Homebru in July 2021!

How to Taste and Cook with Extra Virgin Olive Oil