When the much-anticipated blockbuster film Mr. Bones 3, Son of Bones, releases in cinemas nationwide this Easter weekend (on Thursday 14 April 2022), audiences have a host of new characters to look forward to, additional to their favourites who will be returning for more side-splitting antics. The film boasts a stellar cast including Leon Schuster, Alfred “Shorty” Ntombela, Tumi Morake, Sans Moonsamy, Daniel Janks, Sthandile Nkosi, Jay Anstey and Jerry Mofokeng.

While the film was originally going to open on Friday 15 April, the release has been moved forward by a day due to the long weekend. This means that those who wish to start the weekend early can now watch Mr. Bones 3, Son of Bones on Thursday 14 April. More good news is that bookings for tickets may now be made at major cinemas.

Here is a quick rundown of the characters After a lifetime of serving his people and The Great One, Mr. Bones is set in his ways. His purpose is to pass on to his legacy to his son Mathambo. But, to Bones’ paternal displeasure, the young man is very happy the way he is and it is this classic father/son relationship which gives our story its heart. 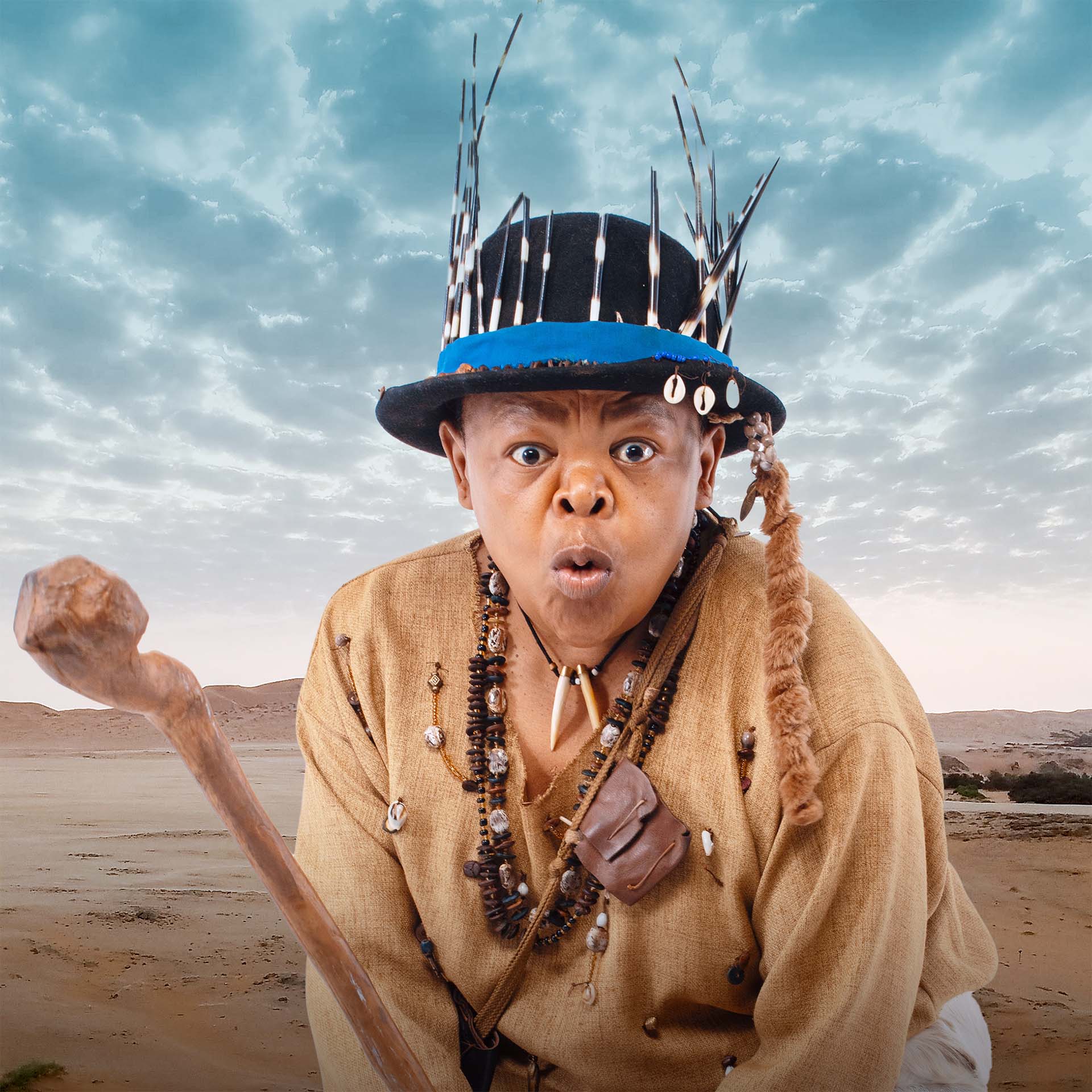 Mathambo (bones in Kuvuki) is Bones’ son, in his twenties, single, and very keen to change that status. He tries his best to please his father but he is just not cut out for responsibility or manly sporting prowess. In fact, on most levels he is an accident waiting to happen.

Add to that his instant love for a beautiful female game ranger and we have an intriguing, relatable and very funny human story. And does the young man grow up? Yes, he pretty much does, with the help of a ghost who has been hanging around Kuvukiland since the boer war. 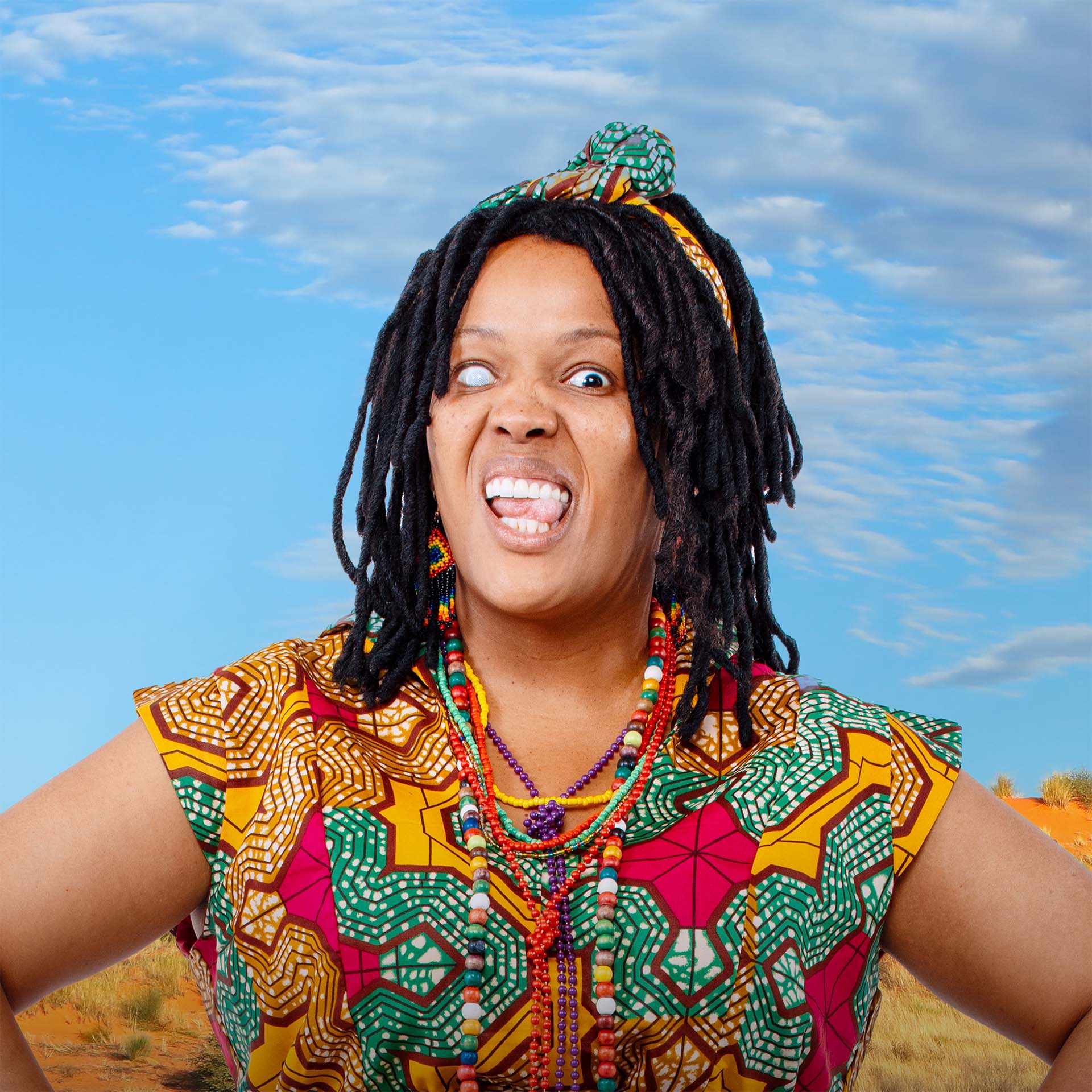 Mamba is one of the few Kuvukis who travels outside of Kuvukiland. She is also an entrepreneur, cynic, crook and utterly charming. She and Bones have a past with each other, which is hinted at, but never disclosed. It is Mamba who sells out her people to the illegal oil drillers. She can also handle herself in a physical brawl. 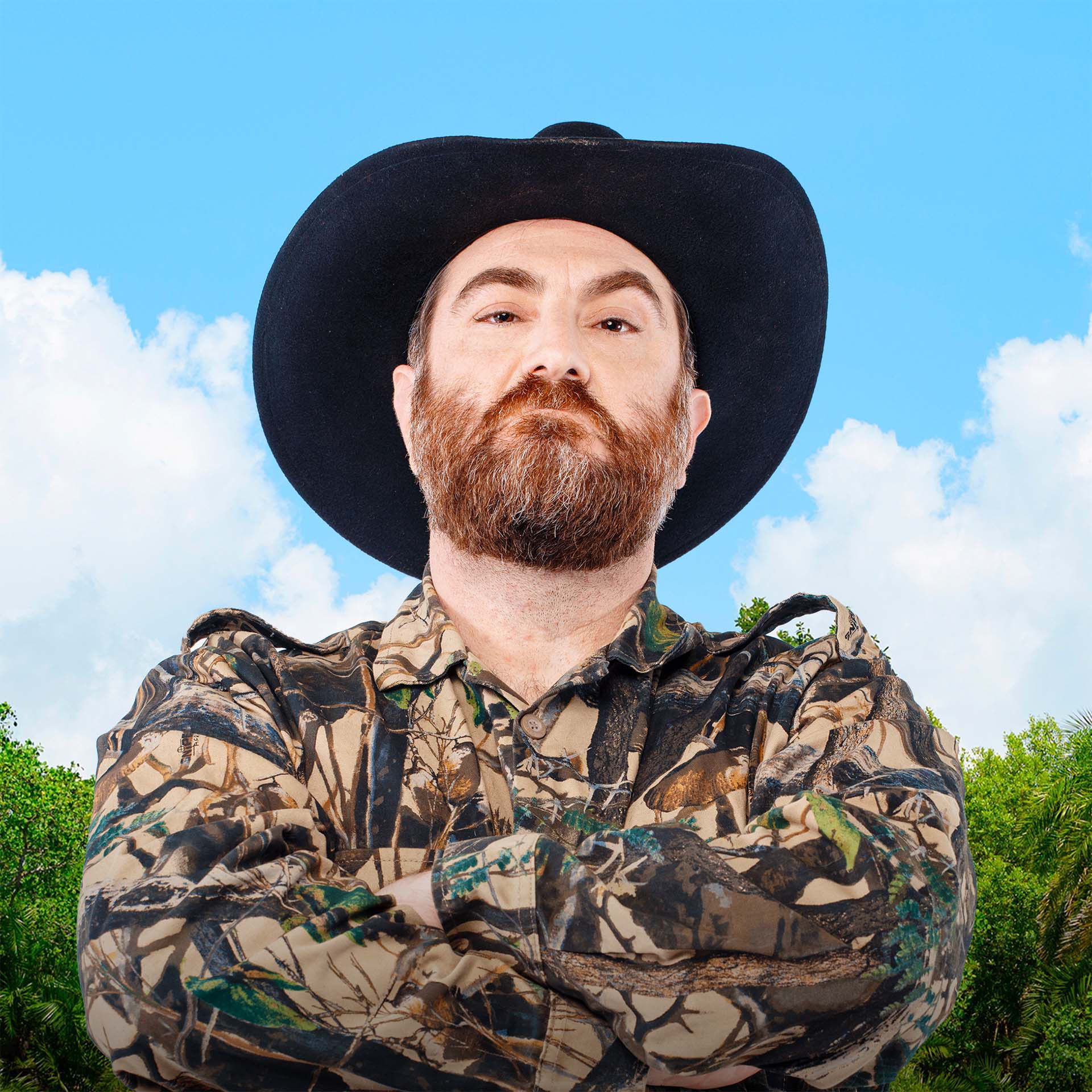 Jack sees himself as the archetypal tough Texas cowboy, but he is probably originally from Benoni. What he definitely is, is big, unpleasant and unscrupulous. He has a licence to drill for oil in Kuvukiland. 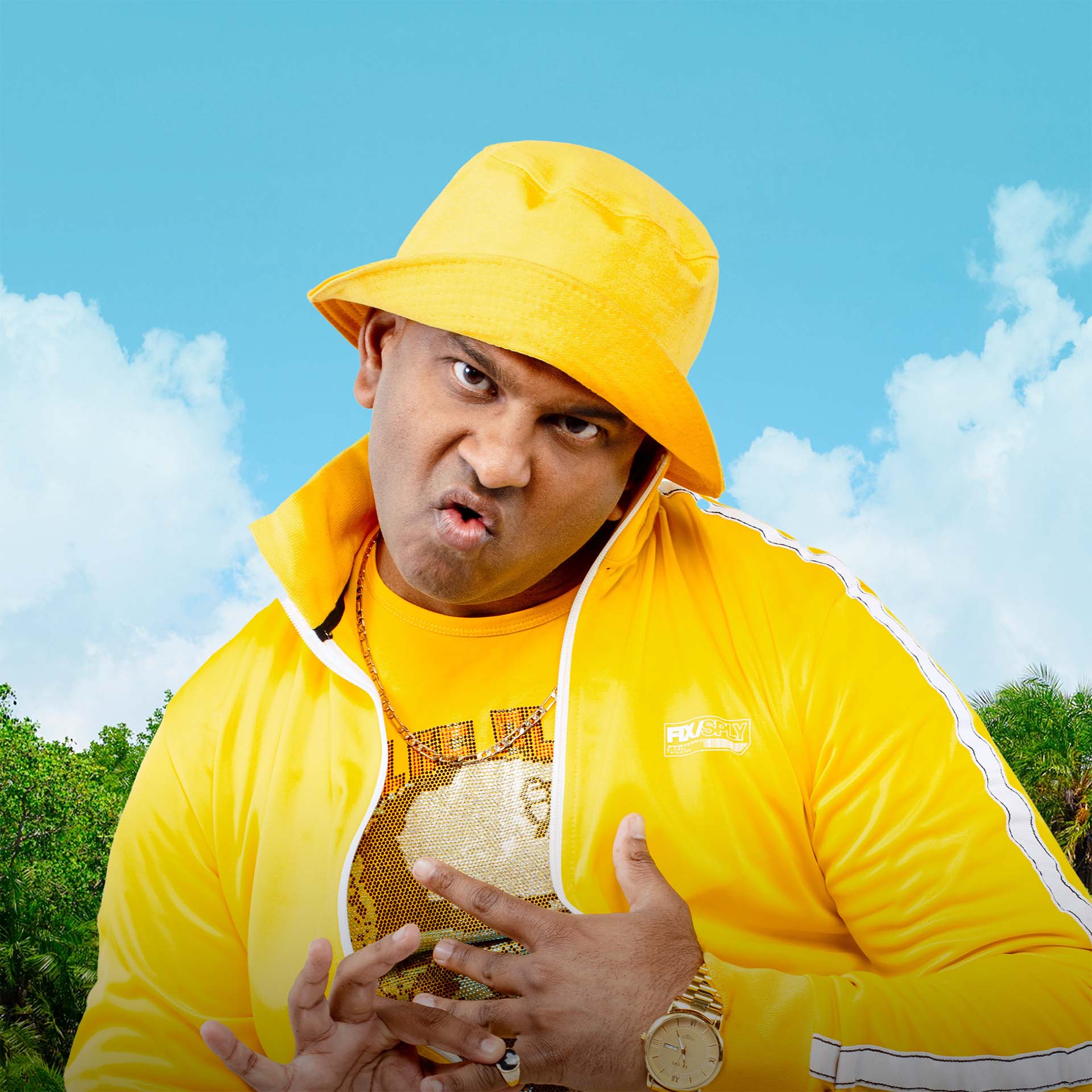 Alvin is the man who “arranged” the oil drilling contact with the Department of Mineral Affairs though some un-named community connections. He is garrulous in the extreme and, in his own mind, dresses at the cutting edge of trendy. He gets hit by a love dart and falls in love with Mathambo, leaping into a Bollywood-esque song and dance that is a highlight of the movie.

Gabrielle is a professional game ranger employed by Jack and Alvin as their guide as they recce Kuvukiland and its surrounds. She is beautiful, good at her work, but naïve about the ways of the world and the desires of the male species. As she discovers the unscrupulous oil drilling intent of her employers, she is thrown into turmoil. Not to mention by the love struck attentions of young Mathambo. 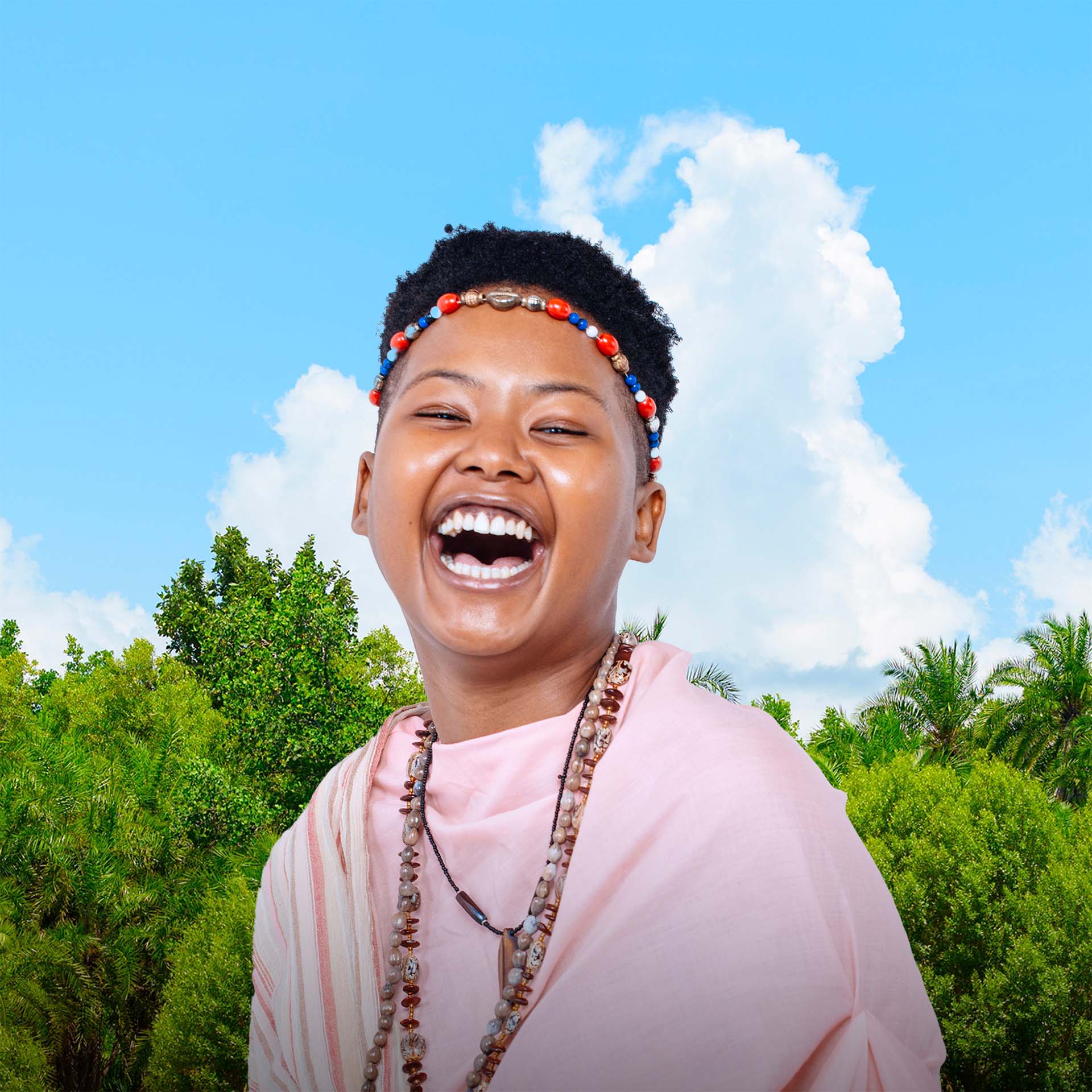 Shy, self-effacing and a bit of a tom-boy, fearless. Her job is to look after the King. She is our Cinderella – unnoticed by Mathambo until the very end, when Gabrielle gives her a makeover and she knocks Mathambo out with her hitherto hidden beauty. The belligerent, old, accident prone King of Kuvukiland. All the old guy wants is to be left alone to live out his days in the ease and style that befits his royal, African status. But he is continually dragged into the impossible position of mediator between father Bones and son Mathambo, which, for inexplicable reasons, is always accompanied by extreme physical pain and suffering to himself.