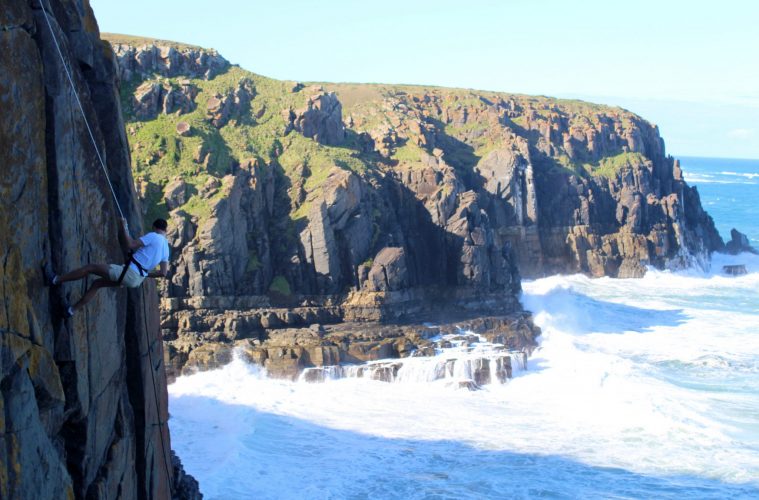 “Just ease back slowly, you can do it,” Dirk assures me confidently. I follow his instructions, leaning back gently, and then let out a yell.

Turning my head I’m suddenly reminded that I’m edging off a 20m cliff, with the crashing waves below adding to the suspense.  Slowly acclimatizing, I calm myself down, and push past the anxiety to survey my surroundings – green rolling hills jutting out from the headlands and dropping into the ocean, and in my abseil gear, I was standing safely against one of these cliffs.  My yell changed into a soft chortle, and lastly a loud guffaw as I took in the environment, and this was only day two of the Wild Coast… 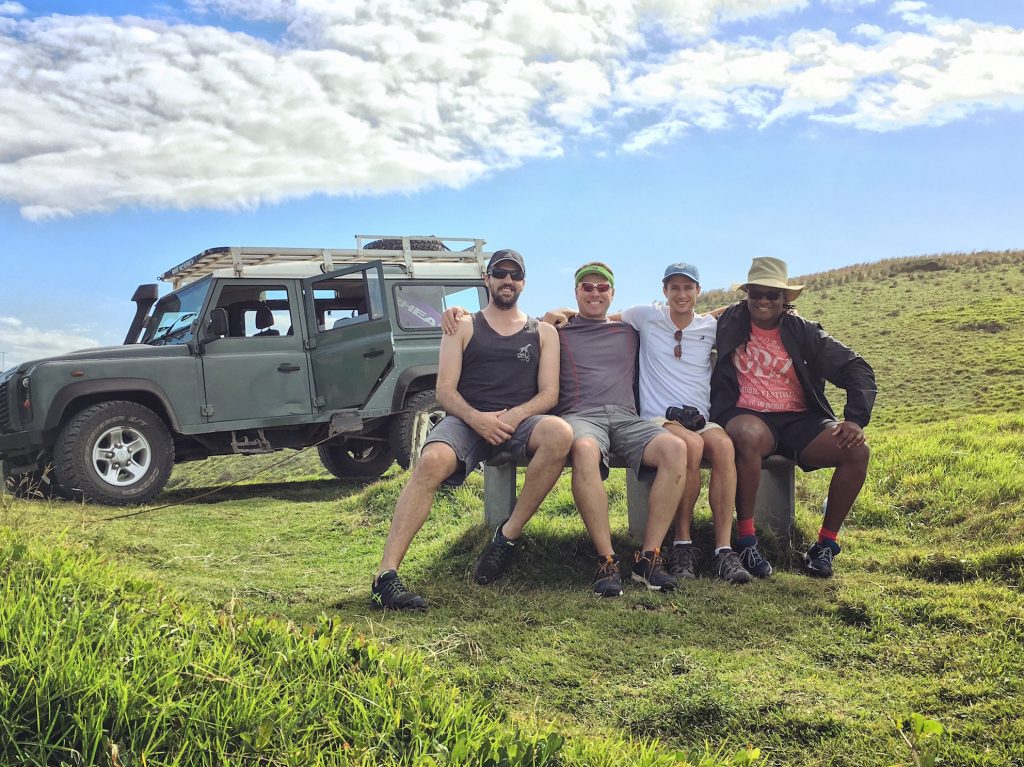 When I was invited to visit the Wild Coast earlier this year by its Holiday Association, of course I jumped at the opportunity. The Wild Coast reaches from the southern tip of Kwa-Zulu Natal to East London further south. The beauty of this piece of land – and partly where it gets its name from – is the fact that for this stretch of land the national highway bypasses the coast, keeping further inland. This makes many of the Wild Coast spots less accessible, but the perfect juxtaposition of wildness and peace.

Reviewing this piece of coast, I chose the southernmost part of the coastline to visit, and selected three hotels to profile. My parents had regaled us with stories of their Wild Coast Amble in the area and their tales left me anxious to explore. The Wild Coast Amble or Meander is a coastal walk between several of the hotels. You can choose the standard 5 day experience, or prolong it by adding in some extra rest days at the various hotels. Porters carry your gear which means all you need to do is enjoy the walk, and arrive at your next hotel for a shower, sun-downer with a view, and a three course meal.

It had also been sometime since I’d gathered some of the lads for a road trip, so I invited three mates, loaded up some clothes and whiskey, and off we went wanderlust biting at our heels. We opted to drive between the hotels, rather using the extra time to try out their activities, and enjoy the off-road driving in-between.

After a long drive from Cape Town, overnighting in East London on route, we made the short drive to our first stop: the Morgan Bay Hotel. The hotel is the biggest property in the Morgan Bay village and certainly impressive to say the least. We were greeted not only by the friendly staff, but also the hotel’s well decorated interiors, spacious communal lounges, and Jacqui’s food is some of the finest I’ve had in the country! 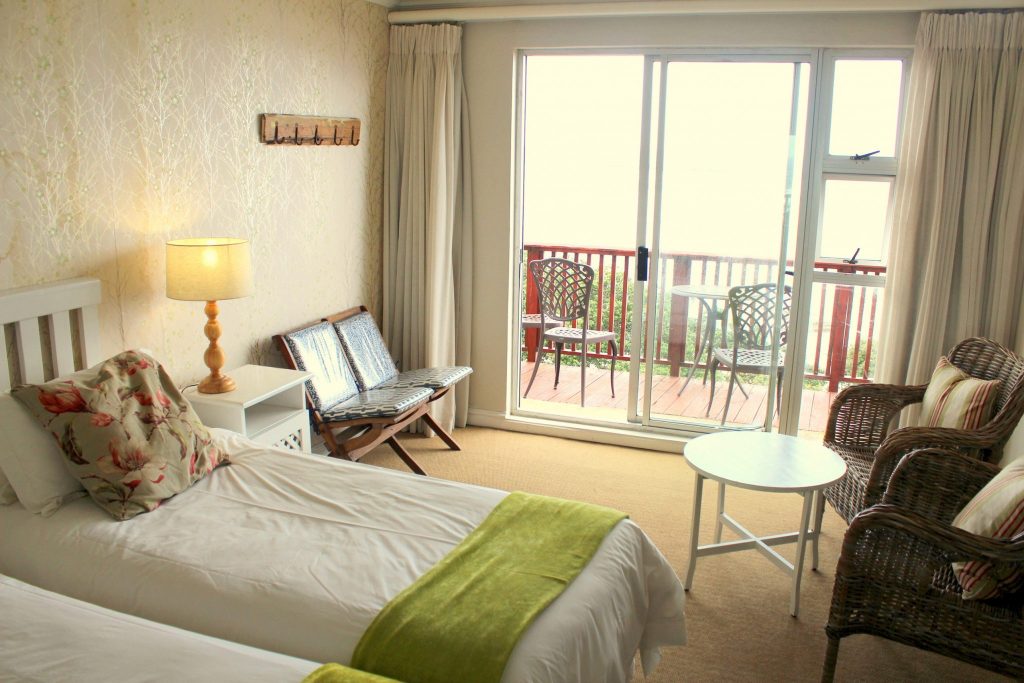 After two days on the road we were itching to get out and enjoy the gorgeous landscape. On our second day we were dropped off at the Double Mouth view point, and began a dramatically scenic walk back to the hotel via the coast. This part of South Africa is known for its magnificent peninsulas that reach out and drop into the ocean, and Morgan bay did not disappoint. After 2/3kms we found Dirk van der Walt waiting for us on one of these precipices, where we abseiled down, and climbed back up. With adrenaline pumping and hands a little shaky, we walked over to the magnificent view spot, and Morgan Bay Hotel owner Richard Warren Smith whose family have run the hotel for generations, drove over and met us with Champagne. The experience of bubbly in hand, and the sun setting over kilometres of coastline will always be firmly etched in my mind.

The wide estuary alongside the hotel also provides ample place to explore via kayak or stand up paddle boarding. Two of the guys managed to capsize their boat – luckily close to the shore, and I’m sure had nothing to do the with glass of Krone we enjoyed at lunchtime. After storytelling and catch-ups over meals and we were starting to throw off some of our city-self and embrace the wildness of the environment.

On the journey to the well-known Trennerys Hotel, we stopped at Wild Coast Horseback Adventures and were taken by owner Julie-Ann’s son on a short ride to the Kei Mouth. After a short ride through the forest we emerged on the beach and what a welcome sight! This was my first horse ride on the beach and the added bonus of the river mouth and lagoon made for spectacular scenery. Besides hiking or driving between the hotels, you’re also able to make the journey by horse – definitely well worth the experience. 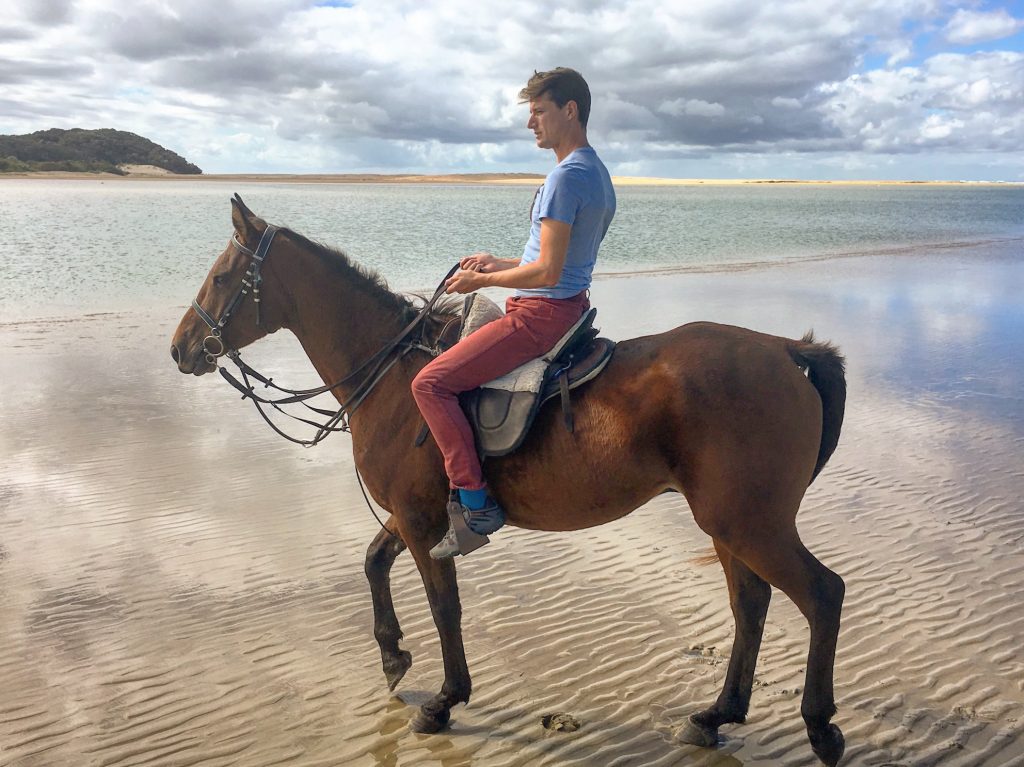 Trennerys Hotel has a great reputation of good vibes on the Wild Coast. Throw in luscious gardens and friendly staff, and it feels like you’ve arrived on a tropical island. The hotel feels more like a little village, with most of the guests having their own little cottages between the palm trees and strelitzias. I was immediately reminded of childhood family holidays, and couldn’t resist trying all the hotel facilities – tennis, trampolining, canoeing, fishing, swimming in the warm ocean, and ending with a beer at the pool… ok perhaps more accurately it was a coke in my childhood memories!

Closely linked with Trennerys, is Trevor’s Trails. They are a couple of short experiences that explore the local area, particularly along the Qolora River. Two boat trips, and a short walk led us to the astonish ‘Gates’ – impressive rock wall that cradle the river. Our host Carlos quickly stripped to his swimming shorts and proceeded to dive off the cliff into the river. Naturally we were hot on his heels, but with a little more caution upon reaching the edge of the jump. Typical to the Wild Coast, the hotel’s beach-side location provides kilometres of beach to explore, and often the only others spotted are the local cows who seem to love visiting the beach to rest!

From Trennerys we were collected by Sean, the assistant manager at Wavecrest Hotel, which was our third and final accommodation for our trip. As we moved a little further north for every hotel, so the wilder and more remote the hotels were. To further prove the point, Sean took us to the hotel via the off-road track, only accessible by 4×4. Upon departure he handed me the keys, and wearing a cheeky grin, told me I was driving. This was my first experience of driving a 4×4, and after a few minor obstacles I was ready for the big stuff. River crossings, dongas, and sleep inclines were quickly – well after a few stalls – conquered. On route a stop at a home shebeen (local tavern), meant we could enjoy a beer and practice my limited Xhosa. 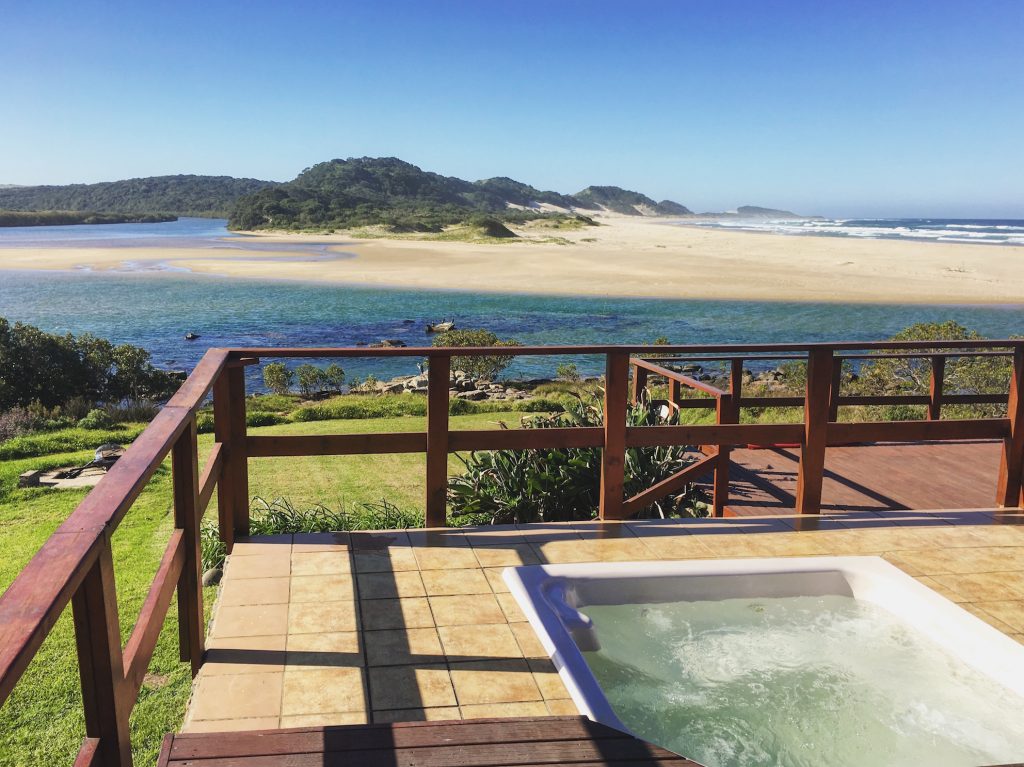 Just over an hour later we pulled into Wavecrest. I’m sure I spent the first 10 minutes with my jaw at my ankles – the view from the hotel was nothing short of breathtaking. The vast vistas encompass kilometres of beach with immense sand dunes to the right, and a sprawling estuary and coastal forest to the left. What made these views even more special, is that they could be admired from both the pool and jacuzzi on the deck – naturally I spent a fair amount on time in the former with my Kindle and a G&T. Similar to Trennerys, rondawels make up the majority of the accommodation in at Wavecrest, many of which enjoy the views described above. Although it’s a further drive to the hotel,  the dedicated staff and incomparable views are worth the drive.

One of the most popular activities at the hotel is the daily boat trips along up the river estuary. I was astonished to discover that the vegetation along the river is in fact a mangrove swamp! We were greeted by the distant cries of Fish Eagles, and caught furtive glances of the kingfishers that flirted along the river edge. At our turn around point we stopped for drinks, and for kids (and adults alike) to jump from the roof of the boat into the river. We were delighted to also discover a well-appointed spa at the hotel, and each of us guys visited once or twice for full body massages to sooth any muscle pains from the rock climbing, hiking, and horse riding.

Of course a big thanks to the wonderful team at Old khaki for kitting us out for the adventure. The brand is synonymous with outdoor adventures in South Africa, and we wore the gear with pride.

Most importantly to the Wild Coast South Africa for the invite and making this such a special trip. To find out more about the Wild Coast visit the WCHA website, Instagram, or Facebook. The area is the perfect playground for a group of guys needing some time out – or anyone for that matter – who also suffers from some wanderlust, and it prepared to treat it with a decent does of Wild Coast magic.