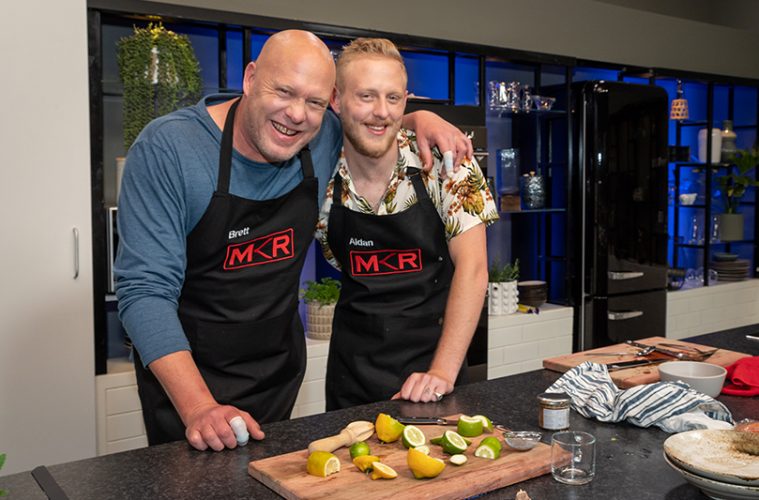 Their menu comprised a starter of Blue Cheese & Phyllo Parcels with ripe Fig Preserve, a main of Steamed Salmon with chilli, ginger and lime sauce served with Roasted Tomatoes and Baby Potatoes and dessert of Aidan’s grandmother’s signature Pepper Ice Cream – with a Peanut Brittle twist. It turned out to be two twists, because the ‘pepper’ was actually chocolate chips from the yoghurt used to make the mixture and the ‘peanut brittle’ evolved into ‘peri-peri cashew brittle’ during their shop. 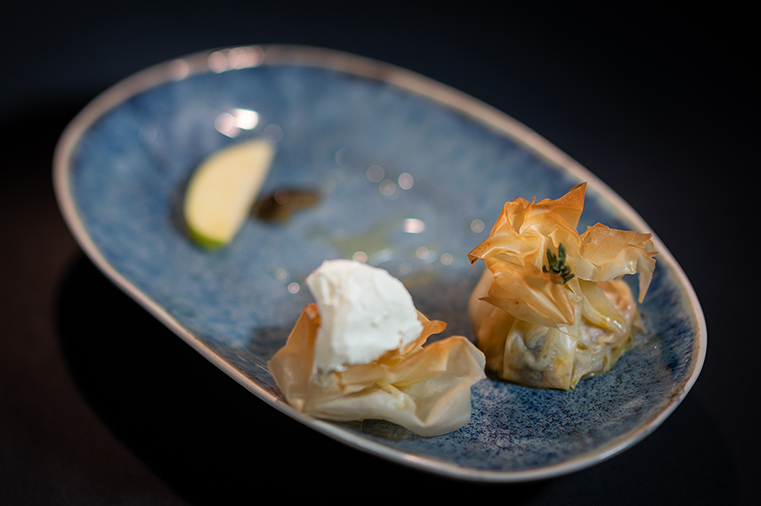 Christening their Instant Restaurant ‘Cooper’s Kitchen’ and setting up a laid-back beach front vibe that matched their ambition to one day run a B&B on the water, Brett & Aidan started off calmly – but things rapidly got out of hand as the pressure mounted.

As Aidan tackled the ice cream for the dessert, Brett was already showing signs of strain as he forgot to add a series of ingredients to the sauce that would accompany the fish. Having added everything he could remember, he then set about tweaking it by adding a host of other ingredients in a bid to drop the acidity level. 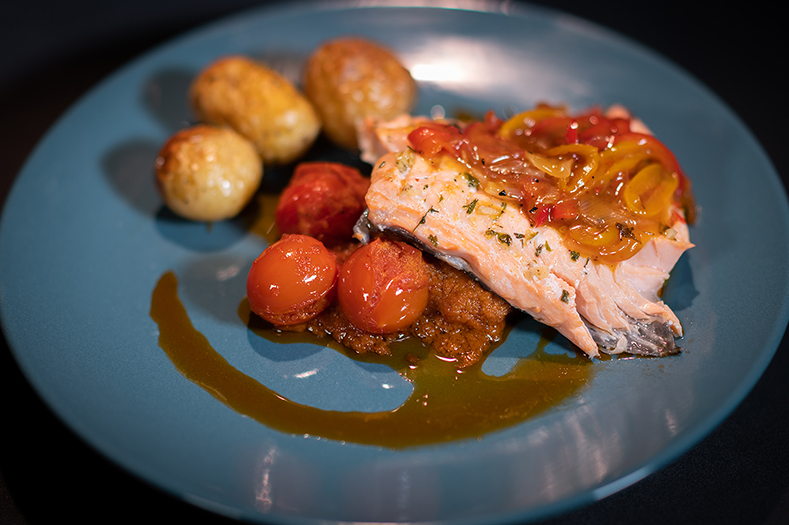 Having gotten to know Brett & Aidan over the last three weeks, the guests were expecting big portions with bold flavours and Karen & Tenille were worried that they were still bottom of the leaderboard. Welcoming everyone as family and friends and asking the sole man at the table – Craig – to be their front of house manager for the evening, Brett started to tear up as reality set in.

As they returned to the kitchen to finish the starter off, conversation turned to the menu, with Tenille questioning whether they’d made all the ingredients for the dishes themselves – leading to a disagreement with Palesa N about pre-judging their efforts and not giving them the benefit of the doubt.

After a minor mathematical mishap in the kitchen around the number of phyllo parcels required to get each one of the 10 guests, 2 parcels, the starter was served.

David felt the creme fraiche and the apple were out of place, especially as the menu made no mention of the two ingredients. J’Something said that although he loved a good phyllo pastry he hadn’t enjoyed the dish, wanting more blue cheese and a better ratio between the textures. Retha wanted more blue cheese too, with Nevi declaring there was too much pastry and Karen & Tenille saying they’d been served veggie parcels, not blue cheese parcels.

A discussion around the main brought out some tensions between the contestants again, when Palesa M said the salmon dish was something she’d make most weeknights for her family. Tenille said she didn’t eat salmon every week and thought it was a ‘special occasion’ dish, highlighting a North/South Jo’burg divide and leading Palesa M to ask why she’d made such a big issue of it?

There were more tears as the main came out, with Brett buckling as he called the contestants his ‘family’ and Aidan following suit as he saw his Dad, crack. Emotion got the better of them when it came to explaining the dish, with each contradicting the other and not being able to present what exactly they’d served up. 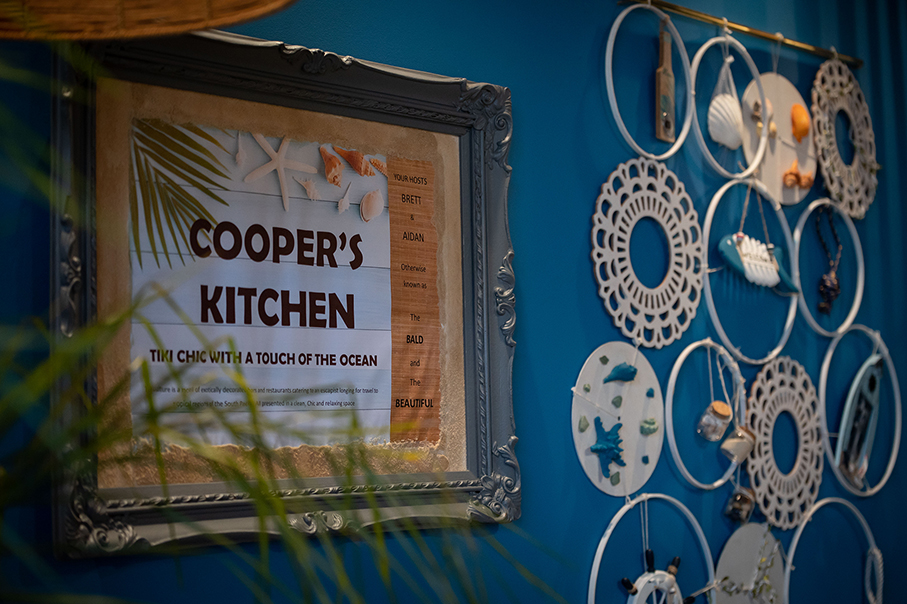 David asked who had cooked the salmon and, despite it being a team effort, praised Aidan for the perfect steaming when he said he’d made the decision that it was done. He was let down by the sauce though, finding it overpowered the delicate fish. J’Something said the salmon was delicious but that everything around it on the plate hadn’t worked. Karen complained that she’d received the smallest piece of salmon at the table and while Palesa N enjoyed it, Craig was left hoping for a bit of lemon and Retha declared ‘something just wasn’t there’.

Hoping to finish on a high, the dessert was their calmest course in the kitchen. David said it was the most honest dish they’d served on the night and they’d delivered what it said on the menu – but that the balance of flavours had been upset by the peri-peri in the cashews they’d used in the brittle. J’Something was disappointed to not see big chocolate chips in the ice cream and found the peri-peri-brittle had dominated the plate. Karen wondered if they’d simply picked up the wrong bag of nuts during their shop and Tshepi was left wishing the ice cream had been creamier. 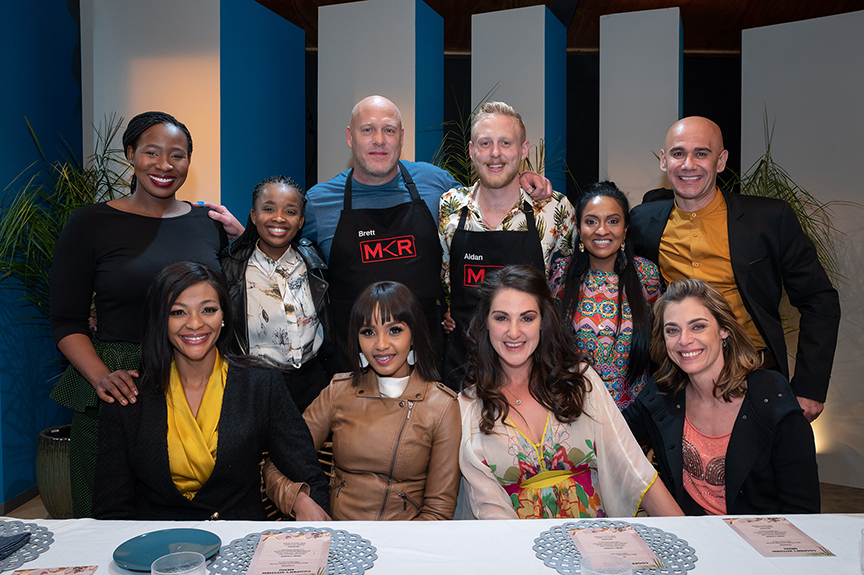 As the contestants prepared to score the meal, Brett & Aidan were left sitting breathless on the kitchen floor, with Brett describing the night as the toughest ever of his life. Retha & Tshepi, Palesa & Palesa and Karen & Tenille each scored them a 6, with Nevi & Craig giving them a 7 for a total of 25/40.

J’Something declared their starter a ‘blast from the past ‘but said it lacked flavour and ‘oomph’, scoring it a 5. David said the play of apple & cheese had actually been lovely but the dish wasn’t reflected in the menu description, scoring them a 5. For the main, J’Something highlighted the perfectly-cooked salmon but reminded them that everything else on the plate had let it down, scoring them a 6. David said the sauce overwhelmed the salmon almost as much as they’d been overwhelmed by the pressure in the kitchen, scoring them a 6. Their dessert picked up the lowest score, with David handing them a 3 for the lack of balance and J’Something, a 4 because they’d tried something they’d never done before, at a crucial time – and hadn’t cracked it. Those scores left them with a total of 54/100 – and at the foot of the leaderboard.

As Tenille expressed her relief, Brett said the scores had been fair and that their ship hadn’t sunk yet – indeed, Palesa & Palesa still need to cook next week, to finish up the first round.