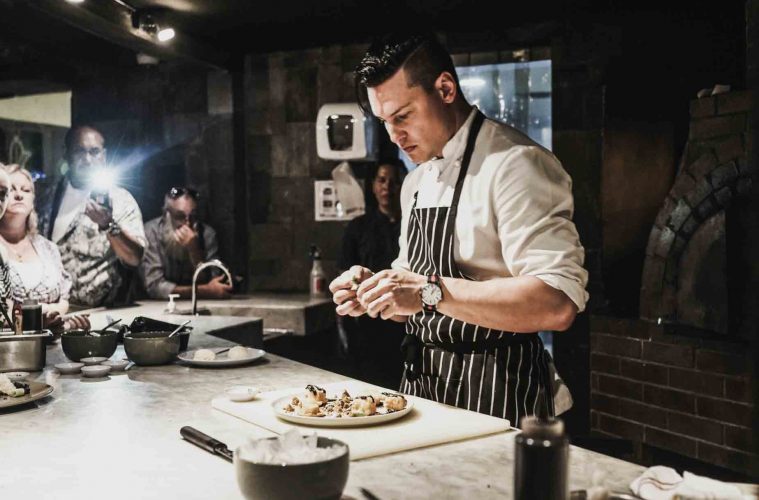 Catching up with Ben Ungermann

Ben Ungermann, runner-up of MasterChef Australia 2017, returned to South Africa this month for a series of nationwide Masterclasses.

After attending Ben’s dessert Masterclass last year, I was lucky to spend some time finding out more about the world’s favourite ‘Ice Cream King’.

Where did your food journey begin?

My food journey didn’t begin when I was super young. I only started cooking when I was about 16. I was living with my grandma at the time and she used to make all my lunches and dinners. She used to put up amazing food and that’s where my love of cooking started.

Why ice-cream? What is it about this sweet treat that gets your creative juices flowing? 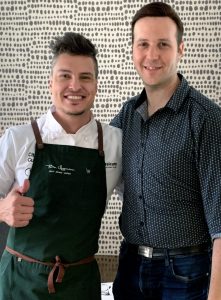 Not many people know this but going onto MasterChef, I had never actually made a dessert in my life. It’s not because I don’t enjoy desserts. It came from the fact that I had a bit of a clue that making desserts is more like a science. For me that didn’t seem to suit the type of person I am. When I used to watch my grandma cook, it was cooking with love and tasting as you go.

It wasn’t until the MasterChef producers came to us and said we can’t be good at just one thing because we would never make it the whole way through. You need to be an all-rounder, a jack of all trades. If you’re strong at just one point, your weakness is what’s going to get you knocked out. So I started to try my hand at pastries and ice creams and for some reason I just had a knack for it.

Then with the ice cream, I decided to take it a step further. I wanted to make it 100% natural with no stabilisers or preservatives. I didn’t want to cheat. I wanted to make really beautiful old-school ice creams and I wanted to incorporate amazing flavours that are outside the box and what people haven’t seen before. I think that’s what made my ice creams different and unique. The way I create ice creams too is a completely different concept to traditional anglaise. The whole thing is made chilled and I use a whole egg. Who is your foodie inspiration and why?

I don’t want to sound too cliché but it’s someone like Heston Blumenthal. The way that I look at food now is completely different. He’s a pioneer in what he did and I know there’s plenty of other people now incorporating theatre and a lot of gastronomy in food. For me he was the first and that’s why I have so much respect for him. There will never be another Heston, he was the first of his kind.

Now when I make food, I think about more than just flavour. I incorporate as many different senses as I can because we all need to eat so for me it’s really important to make it an experience. Something that we celebrate and rejoice. I do a dish called ‘Campfire on a Beach’ where you actually light the dish on fire. Things like that really get my creative juices flowing and makes what I do really exciting.

So Heston is my inspiration. I went to Dinner by Heston in London and I worked with his right-hand man, Ashley Palmer-Watts. It is incredible to work there. Usually when you work in a kitchen, it’s hustle and bustle and there’s so much chatter. In Heston’s restaurant it’s quiet. It’s precision and everyone knows their role. It’s a well-oiled machine producing fantastic food.

Tell us a bit about how it felt stepping into judge’s shoes on MasterChef Netherlands after being a MasterChef contestant.

It’s bittersweet. It feels incredible to be invited onto another format of the show. It’s a real honour but at the same time I actually feel for the contestants because I know exactly what they are going through. I can feel their hearts beating when you reveal the Pressure Test that they have to do. You can just see the fear in their eyes. I remember all of that. I have nightmares about it. It’s definitely bittersweet. I loved being there and being a part of it but I also feel sorry for the contestants.

It’s great to be a mentor and give the contestants first hand advice because you’ve been in their shoes. Stuff that’s going to be useful to them. I told them, you’re never going to get used to the fear and the nervousness so use it to your advantage. Use all that adrenaline and energy towards working as hard as you possibly can.

You were in South Africa last year as part of your world tour. What did you enjoy most about the experience?

The people. Straight up. I love coming to South Africa. It’s a beautiful country with so many different regions and amazing produce. To be 100% honest though, it’s the people. You guys are just like laidback Australians but with a better accent. That’s the way I’d describe South Africans.

Other than the people, what else made you want to return 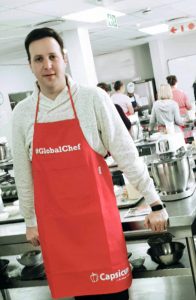 When I came on my first trip, I didn’t see enough of South Africa. I was based more in Pretoria and Johannesburg. There’s so much more of the country that I know I need to experience. You can’t just go to two cities that are relatively close by and sum up a nation. There’s so much travelling I need to do and so much food I want to experience. I’m heading to Cape Town on this trip which I’m really excited about. I copped an incredible amount of flack for not going there last time. I’m glad to be going this time and I’ve heard the food is sensational down there.

Tell us a bit about your recent time in India and now settling in Indonesia.

The only way I can describe India is controlled chaos. In India, MasterChef Australia is like a religion. There are crowds of people and I need security in front and behind me to get through the crowds. It’s just insane. It’s next level there. I don’t necessarily understand why it’s so big there but they really have a rich food culture, they love food. I did an ice cream launch there in a very small space but they managed to fit about 40 paparazzi in. There were just lights flashing all the time. It felt kind of cool but at the same time it was terrifying.

There’s a few reasons I’ve decided to settle in Indonesia. At the moment I feel Jakarta is booming and it’s the right time to be there. They are starting to really open up to other cuisines. Also I’m part Indonesian and it’s still relatively close to Australia. So for me, I never wanted to settle in Australia. It never really 100% felt like home. I have strong Dutch and Indonesian ties but if I had to pick one, Indonesia is probably the most sensible.

Have you tried any of our local cuisine? What was your favourite dish?

I’ve tried some Bunny Chow and a few other things but to be honest I don’t think I’ve sampled enough of the cuisine here. There’s something I just can’t get enough of and that’s biltong. Especially with all the different types of game meats. I absolutely love that stuff. We try to do it in Australia but we can’t pull it off like you guys.

Have you had a chance to meet any of our local chefs?

I got to meet Chef Chantel from Mosaic. She is just an absolute delight and her food is really good. That was a very humbling experience to meet her and eat at her restaurant. I spent some time with J’Something too. I really like him because cooking wasn’t his first profession. He’s just a really cool guy and I see some similarities between myself and him. He doesn’t have a qualification and I don’t either. I’ve done some work in some exclusive and Michelin Star restaurants and sometimes I need to go back and pinch myself. Everything I’ve learned was compressed into the seven months of MasterChef Australia.

Which South African chefs do you admire or follow?

I’m trying to get into a restaurant called Fermier. It’s almost its own ecosystem and almost completely self-sufficient, which I love the idea of. I’d love to meet Chef Adriaan from there.

If you were to create a dessert inspired by your trips to South Africa, what would it be? 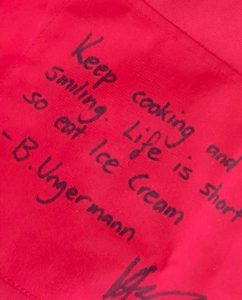 I never do any mainstream desserts and the thing I’m absolutely in love with is biltong. So I would try to find a way to incorporate that into a dessert. I’ve done some really cool casual desserts, like a really beautiful Belgian waffle with a spiced pork belly and a smoked vanilla ice cream and some cinnamon apples. I’d probably try and mix the savoury and sweet. I also really love milktarts. I absolutely crave them every time I come here. It would be something that South Africans would know and recognise but it would be my twist on it.

What’s next? Where do you see Ben in 5 years?

I have a lot going on in Indonesia and hopefully I’ll have my own restaurant by the end of the year. The plan is to have it on a shopping centre rooftop, right in the middle of the CBD. It’s going to be almost self-sustaining. It will be like an actual greenhouse, completely surrounded by a garden and produce. That’s something I’m really excited about. There’s going to be more of a move towards degustations and fine dining and away from ice creams. I feel like I’ve been kind of pigeonholed and I can do so much more than just ice creams.

I’ll continue to try and work with a lot of charities. I’m really enjoying my time with Capsicum and there’s stuff in the works for the coming years. I’ve been blessed with the opportunities I’ve had and I really want to give back.