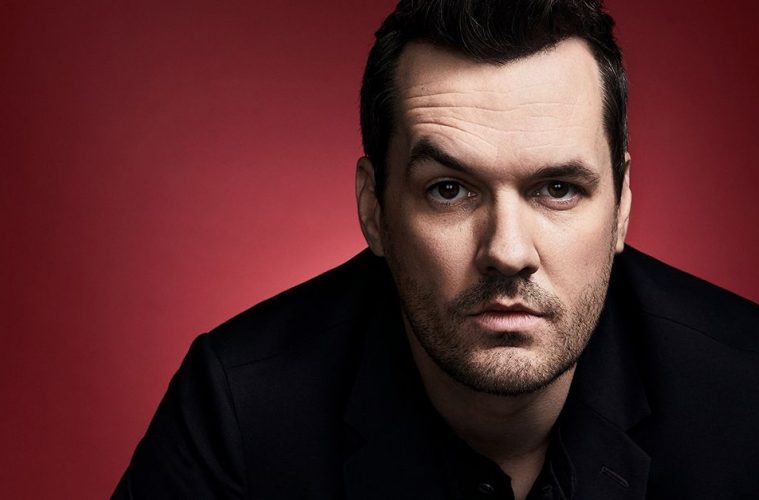 Jim Jefferies – The man who made me laugh

If you know me just a little bit, you’ll know straight off the bat that stand-up comedy is not my thing. I just don’t find it funny. I find it forced and rehearsed, and completely unbelievable. But the hype around Jim Jefferies’ South African tour was so on the forefront of my social media and social interactions, that I couldn’t help but become increasingly curious about this one-man wonder.

Having never been to a stand-up comedy show of any sorts, I almost (almost!) allowed my friends to persuade me to see his one-night-only show in Cape Town. What finally swayed me was the offer from More Than Food Mag to join the fun.  If nothing else, at least it will be a nice mid-week break from the usual domestic routine. Spoiler alert: he is the man that made me laugh uncontrollably!

Australian stand-up comedian, political commentator, actor, and writer Jim Jefferies is one of the best-known names in comedy on the planet. He brought his latest major stand-up comedy tour, The Night Talker Tour, to South Africa this month. 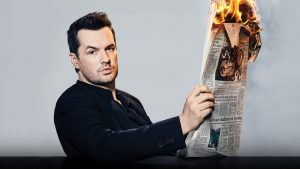 Jefferies has firmly established himself as one of the most popular and respected comedians of his generation, with a controversial and belief-challenging stand-up style that continues to surprise and entertain audiences across the globe.

This man is just a little bit naughty and maybe that is how he managed to convert me in the first five minutes of his opening performance. Sometimes tongue-in-cheek and sometimes brutally in your face, he charmed me with his honest recollections of his own life, which includes hilariously cringe-worthy anecdotes about his lactose intolerance, his smart-mouthed six-year-old and his many failed relationships.

What the writer in me appreciated most was his incredible talent for storytelling. His show is very aptly called “The Night Talker Tour” and although my interpretation of the title might be completely off the mark, the show somehow reminded me of a late-night chat with your buddies over a few drinks. He walks the stage with such comfort and confidence and tells his story the way you would in an informal conversation – interwoven with tens of other little stories along the way, before returning to the original thread. 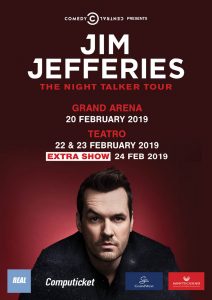 Jim Jefferies is a story-teller of note. And although I’m very sure his material is finely scripted and endlessly rehearsed, he simply loves taking the mickey out of the audience on the fly. We had some great additions to the show because of interjections from the floor, which left us with the giggles and secretly very grateful we weren’t the object of his crude rants. I feel quite red-faced for the guy from Iraq that decided it was a good idea to yell at Jefferies during the show…

Other than his incredible story-telling abilities, what I also appreciated about his show and his content, was the raw honesty and authenticity with which he presents it. His topics, although meant for an adult-only audience and non-sensitive ears, were so relatable to the point where you physically wince, slouching down a bit lower in your seat and biting your fist to stop yourself from bursting out in embarrassed laughter, as you’ve probably been there before. He carefully crafts his material to centre around the human-ness of humans. And let’s be honest – there is no better subject than exactly this!

No subject is taboo – as it should be when you’re having a chat with your friends in the pub. He laughs at his own jokes and cringes at his own misfortunes, of which there are plenty. He is open about things that are not spoken about in social circles, like disastrous relationships, bad parenting, addiction, political correctness, old people and all the things we wonder about, but are too afraid to verbalise. He’s the guy who says what everyone is thinking.

There are no frills to Jefferies. What you see is what you get. As he takes a seat in the single chair on the stage and swigs on his drink, it doesn’t get more real than that. No pretences, no glitter, no bright lights (which he also had something to say about!), no fuss. His conversational tone makes you feel at ease; to a point where you manage to somehow completely forget that you’re surrounded by hundreds of people.

If you’ve never been a fan of stand-up comedy, or aren’t sure about what to expect, just get your hands on some of this man’s material. He is truly a craftsman of words, timing and audience interaction. And he is funny! Like really, really funny. In a dry, cynical, opinionated and middle-aged-man-nearing-a-midlife-crisis kind of way. That is apparently how I like it best. The Night Talker show is something my friends and I will still talk about for many nights to come, reciting punch lines to each other over a few drinks and collapsing in heaps of giggles all over again.

Overnight, I might possibly have become the biggest Jim Jefferies fan alive. He is the man who finally made me laugh. Good and proper. The hour or two, however long it was passed way too quickly and I so badly wanted to stay for another hypothetical drink and another chat with the Aussie who has an opinion on every controversial subject under the sun. I left the Grand Arena that night with a lovely reminder in my back pocket to mull over in the days to come. Jim Jefferies reminded me that we take ourselves and life in general way too seriously most of the time. After all, life is just a sequence of unfortunate events after all. We might as well see the funny in it before it’s gone all too soon.