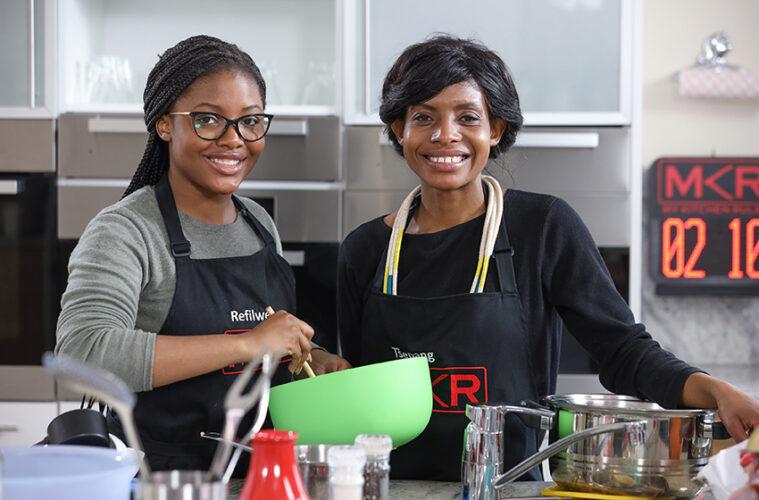 A dessert disaster derailed Tšepang & Refilwe at their Instant Restaurant on My Kitchen Rules SA, seeing them awarded the lowest score of the season so far – 53/100.

Opting to cook a three-course meal inspired by their maternal grandmother, who created a cookbook of her own by writing recipes on the back of love letters she received throughout her life, the sisters from Jo’burg South had a strong start after a magwenya breakfast – but things went downhill from there.

Their starter starred their breakfast choice: Magwenya with Snoek Pâté, followed by a main of Moroccan Lamb Tagine with Samp & Morogo and a dual dessert of Amarula Chocolate Cheesecake with White Chocolate Raspberry Cheesecake, served in their Instant Restaurant, ‘thymeless’.

A rotten egg cracked open to make the cheesecake nearly derailed their preparation early on, but they kept their high-energy approach up as the clock ticked down to their guests’ arrival.

Everyone seemed to be in a good mood this week, with judges J’Something and David Higgs taking turns to juggle oranges before daring the contestants to try it and Tim being encouraged to show off his musical prowess with a rendition of ‘Amazing Grace’, between courses.

The starter of Magwenya with Snoek Pâté arrived on time, but divided the judges’ opinions. David said the magwenya were crisp on the outside and fluffy on the inside, but that the pâté hadn’t packed enough snoek flavour. J’Something felt the heavy-handed use of mayonnaise in the pâté meant it tasted more like tuna mayonnaise than snoek, but that he’d enjoyed the dish as a whole. Shereez loved the magwenya, Kirsten found them a little sweet, while Detlev’s smaller-than-average magwenya had been over-fried to the point of making it impossible to break open. The main course surprised the judges with the interesting presentation of samp and the flavourful morogo, but the lamb was a let-down, with David saying it hadn’t been cooked long enough to make it succulent and absorb more of the spices. J’Something said the dish had arrived wafting beautiful aromas and that it had been a true celebration of African food, but that they needed to get the balance between the sweet and spicy Moroccan flavours away from the sweet side. Shaeem felt they’d chosen the wrong cut of lamb for the tagine, Detlev enjoyed the morogo and Shereez was a little underwhelmed, having expected softer meat after what should have been a ‘low & slow’ cook. 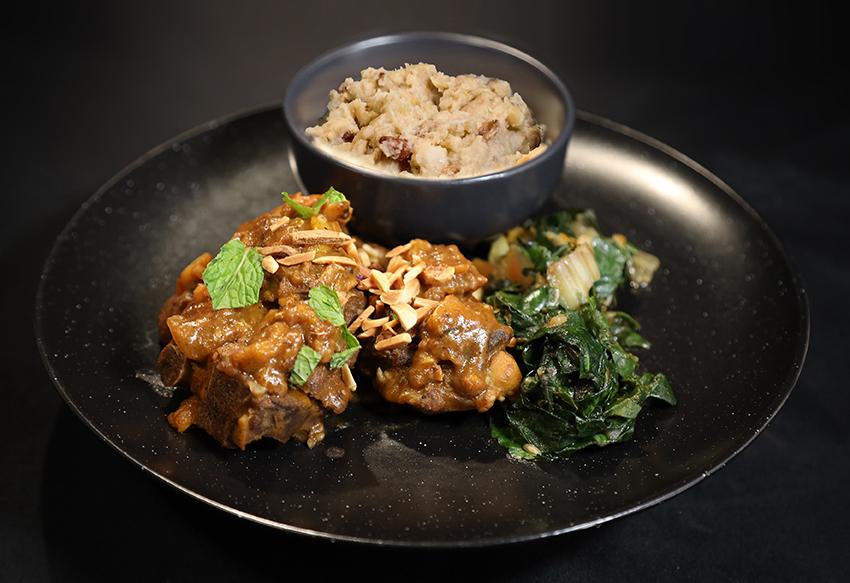 Relatively happy with the feedback they’d received, the sisters set about prepping their final course in the kitchen – but things rapidly devolved as the first batch of cheesecakes flopped, collapsing in on themselves and clinging to the baking tray. Refilwe quickly set about making a fresh batch, but Tšepang quickly took charge and decided to make another new batch when those, too, fell apart. Wondering what was taking so long in the kitchen, David headed off to check on the ladies’ progress – and quickly pointed out that Tšepang had added salt, rather than sugar, to the cheesecake mixture. After a quick pause to collect themselves, the sisters combined the best of the various versions of the dessert they could find and presented them to the judges and contestants. 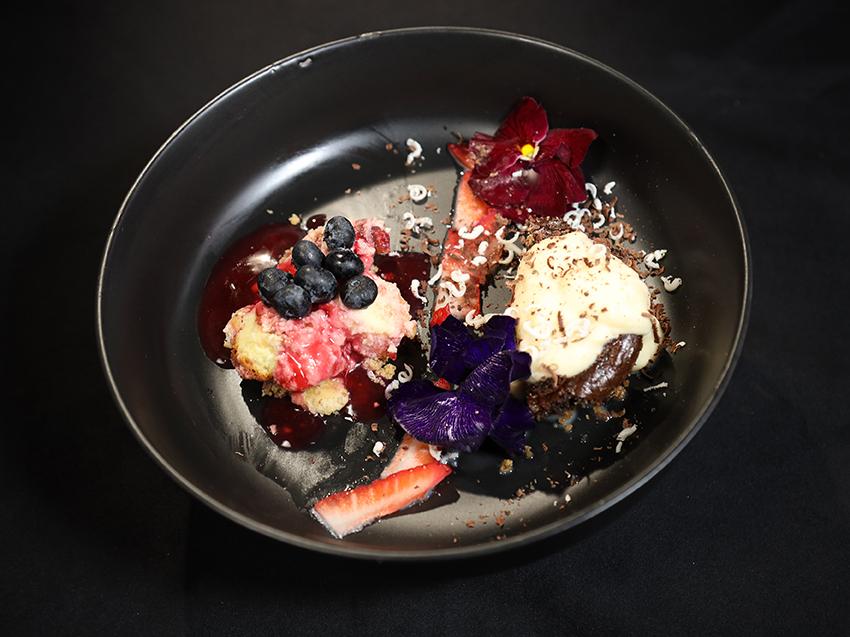 David said it wasn’t the neatest plate of food he’d ever seen, but had enjoyed the flavour and praised them for beating the pressure to put the course on the table. J’Something also felt that the dessert wasn’t truly cheesecake, but he’d enjoyed the flavour and applauded their perseverance. Shereez said hers was ‘just mush’ while Mas-ud found his portion dry, being composed mostly of the biscuit base. Abraham applauded their effort in producing two different desserts, but said that the texture had let them down.

After a long evening, Kirsten & Detlev and Tim & Shereez scored the meal 5/10 each, while both Abraham & Michelle and Shaeem & Mas-ud scored the sisters a 6, for a contestant total of 22/40. David and J’Something both scored the starter a 5 and the main a 6, while the former gave them a 4 for dessert and the latter, a 5. Combining the judges’ score of 31/60 with the contestants gave them 53/100 and put them bottom of the leaderboard at the halfway stage of the competition. 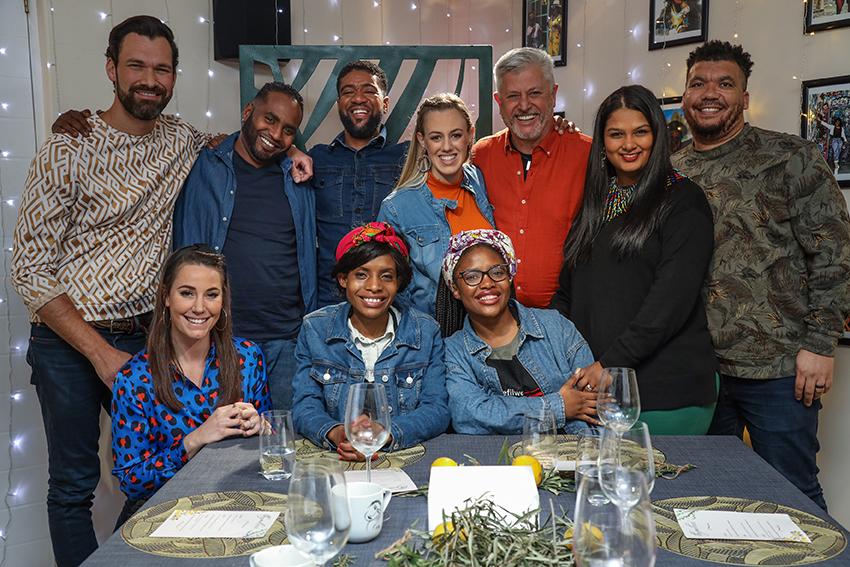 Next week, the heat is on Kirsten & Detlev as they look to show off their German heritage at their Instant Restaurant.

My Kitchen Rules SA is produced by Picture Tree and proudly sponsored by Nederburg. The series is available on DStv Premium on M-Net (Channel 101) every Sunday at 6pm, as well as live-streamed on the DStv App, and is also available on DStv Catch Up after broadcast. Visit the M-Net Website for exclusive show content and join the conversation on Twitter, Instagram and Facebook, using #MKRSA.