For The Missing : A Review

Annabelle Is Missing – Someone must know what happened

There’s nothing better than escaping into a really good book. Our resident reviewer Janice digs deep into the latest offering by Lina Bengtsdotter.

This year, I hope to bring you some great suggestions to add to your reading list. I also hope you’ll challenge yourself and step out of your reading comfort zone and try some new genres.

I’m so excited to bring you my first review of 2019!! A Swedish noir that won the Crimetime Specsavers Best Debut Award! For the Missing (published by Orion) is the first in a series featuring DI Charlie Lager, and it’s a chilling, atmospheric slow-burner that picks up the pace … starting off slowly, with many hints as to where it might lead, increasing in tempo as you continue reading. 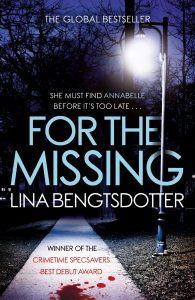 Charlie (Charline – but nobody calls her that any more) and her partner Anders are called from their base in Stockholm to the rural village of Gullspång to assist in the disappearance of a 17-year-old girl, Annabelle Roos. Charlie feels it would be best not to share with anyone that she actually grew up in Gullspång, but try as she might, a secret like that isn’t exactly easy to keep in a small town and even though she ‘escaped’ over 20 years ago, some of the locals still manage to recognise her. Due to her own vices (and boy, she has more than her fair share), she wastes no time in giving her own game away, and almost immediately has to tell her partner that this is actually home turf for her.

As the story unravels, it’s clear that everyone (including Charlie) has plenty to hide, as is generally the case when people are forced to live in close proximity to each other and are desperately trying to keep things to themselves – difficult when those around them know them so very well, and relationships are almost incestuous. There isn’t a lot to do for recreation here, especially for the younger crowd. So it seems they tend to be a bit … shall we say … experimental … rather earlier than most.

I know many would tend to think the opposite: that not having a lot of external influence (WiFi isn’t exactly the most reliable), might lead to them being more naive then their city peers, but it doesn’t seem to be the case! Annabelle was desperate to escape the confines of village life. While the investigation shows
she’s intelligent and apparently also quite religious (strangely enough – quite the paradox), it also reveals that she’s extremely beautiful, well aware of the fact and not afraid to use it to get what she wants. Her highly neurotic, over-protective mother is beyond hysterical at her daughter’s disappearance – but like everyone else, seems to be not quite as co-operative as the police would have expected her to be.

With an unnerving cast of characters who all seem to have something to hide, and a substantial focus on jealousy and revenge, the ambience of For the Missing reminded me a lot of that early ’90’s cult TV series, Twin Peaks. Everyone has their quirks, knows something they shouldn’t and has done something they’re not supposed to be doing (usually with someone they’re not supposed to be doing it with!)

Told from various points of view with parallel story lines that you know will eventually converge (you have no clue how, but you just know it’s going to blow you away when they do), we hear from Charlie herself, Annabelle in the days and hours leading up to her disappearance. There are flashbacks to Charlie’s childhood in Gullspång with her mother Betty – at first though, one can’t be sure if it’s actually her mother as she only ever refers to her as ‘Betty’. We read of a hedonistic lifestyle filled with wild parties at their home, Lyckebo; and then there are interspersed, brief chapters about a strange relationship between two young girls named Alice and Rosa. How does this all fit together? I found myself anxiously reading faster and faster … and then trying to pace myself … unable to
anticipate how this was all going to end.

Charlie Lager is a complex, somewhat dark character. She’s dogged by the ghosts of her past and in this first installment, the author has cleverly brought her back to her hometown to face her demons. I’m sure there are many more still hiding under the surface, but we’ve been given some pretty deep insight as to what makes Begtsdotter’s protagonist tick; enough to want to know more, and to read the next chapter in Charlie’s story.

This is classified as a psychological thriller. It definitely has all those intricate, intense psychological details but I’m not sure I’d go as far as to say it’s thriller material. It’s a really good, engrossing read though and I give it 4, dark, glossy stars!