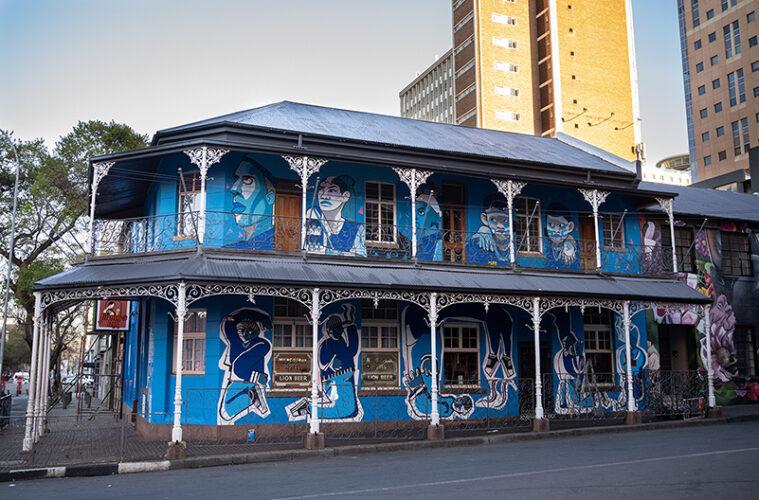 South Africa is well known for its creativity. It is how we tell our stories, and it often connects us to our past. However, the arts are severely under recognized, under supported and underfunded. Halls, one of the world’s most popular refreshing candy’s, purpose is to support the industry and through the mentorship of Karabo Poppy and other mentors, give young creatives their chance in the limelight which will hopefully open up more doors and opportunities for them.

These are the super talented mentees who were handpicked by Karabo and Halls out of hundreds of entrees to take on this opportunity. Their creations now live in Braam, the square of SA Creativity, culture and our youth. 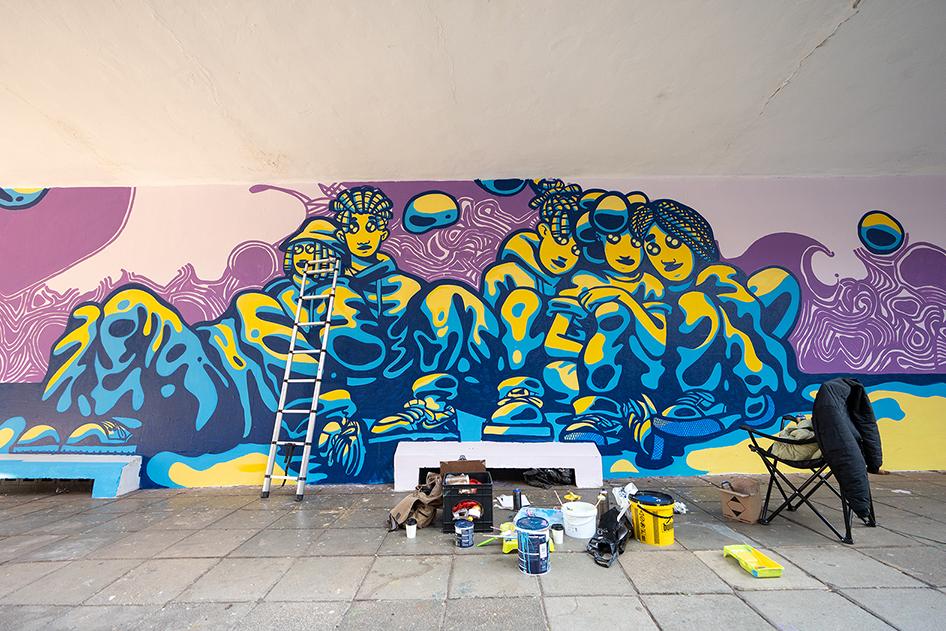 Dustin August is an Illustrator and Creative with a portfolio as brave and eclectic as his passion to constantly evolve how he interprets his inspirations: people.

Dustin analyses each of his muses and recreates their essence through his eyes. He seems to take elements of neo-Asian/African/Realism to bring his art to life.

His experience as a candidate architect shows in his immaculate detail in structure. As an architecture graduate from the University of Pretoria, his work ethic shows just how dynamic his approach and style extends throughout his portfolio.

Thami is a proud and passionate graphic designer who has clearly realized and acknowledge the power graphic design has in his field. He is constantly keeping up with dynamic approaches and incorporates them into his own work as a graphic designer. His greatest strengths are based in his ability to illustrate, photograph and advertise – as he has created beautiful designs from animations to brand identities.

He is strongly influenced by people such as Annie Leibovitz, Shepard Fairey, Paul Rand and many more. He is also hugely interested in the Film industry and hopes to see himself amongst the best some day.

Through the manipulation of typography, images and many other forms, he is able to create & inspire. 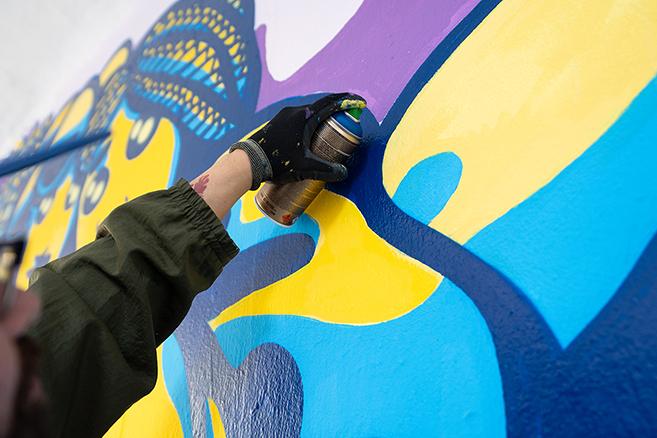 Levy Pooe is a South African visual artist born during the country’s transition to democracy. He began his artistic career at a very young age, he was struck by how things looked and how reality can be represented and how it could be altered. He pursued this interest, and studied Visual Arts in high school. He mostly works from his home studio but sometimes does murals and live documentation, especially interpretations of musical performances.

Levy’s work explores urban experiences of ordinary people. His bold acrylic paintings of the quotidian forces the audience to engage honestly with his work and to make up their own understanding of what the work means. The artists work reveals to us that true accounts of ourselves do not have be found only in the spectacle but through the mundane we are able find genuine non-performative accounts of our experience.

The artist deals with themes such as black figures engaged in contemplative activities, daily rituals and routines as well as the relationship between the urban space and migrants. He is interested in fully interrogating the idea of art as a social diary, a public diary of a black being in the city.

Johhny Allison is a graphic design graduate who has taken his skills and creativity to new heights through his multiple works of illustrations, paintings and murals. He specialized in interpreting briefs by drawing on the every day lives of South Africans and merging this with commercial identities.

As an artist and a muralist, Johnny’s passion lives on blown up versions of his visions. He participated and commissioned many artistic challenges and welcomed these with a fresh perspective each time. 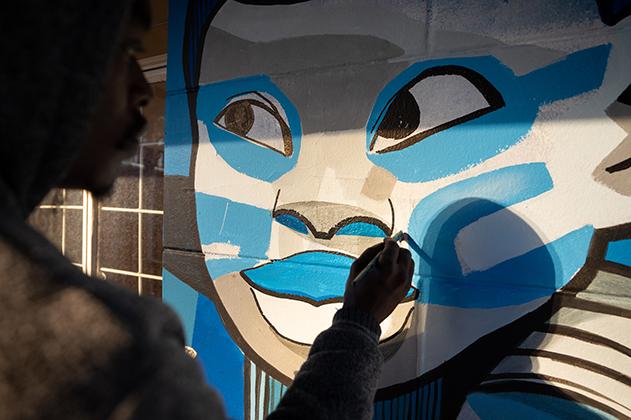 Boemo Diale, born 2000 in Johannesburg, based in Gauteng. She is a multidisciplinary artist, currently studying Film and Television at the University of Witwatersrand. She grew up pervading different racial structures in Rustenburg, Mafikeng and the suburbs of Johannesburg, South Africa. Her works reflect the inner workings of her child self that existed in liminal spaces between rural and urban.

Her works reflect nuances of gender, race, culture, identity, mental health and spirituality. The works are often playful, cathartic, and child-like reflections of the inner workings of her internal world. Many of her works include references to traditional clay pot making, permaculture, African symbols and scarification.

Buhle Ramalepa, a graphic design graduate based in Johannesburg started feeding her talent as a hobby: constantly drawing her facinations with the mundane through her eyes. She draws from the intricacies of patterns and shading she finds around her. Her process starts from her belief that every thing has an “interior” as much as it has an exterior – everything has more to it.

Her works are truly like looking through the eyes of an explorer,  appreciating and absorbing everything by simultaneous expression. 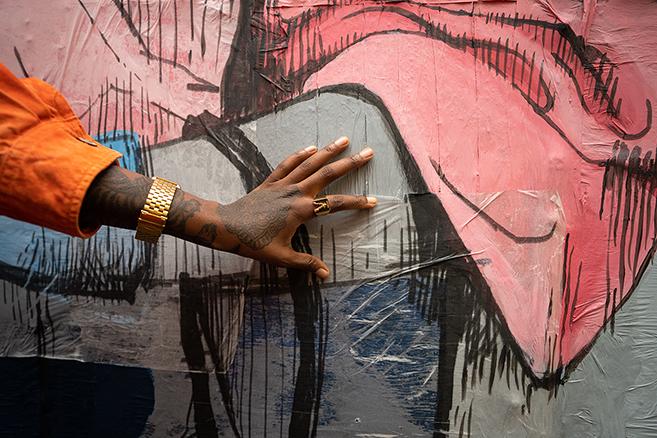 Anathi Hadebe is a fine artist, having completed his BA degree in Fine Arts at University of the Witwatersrand majoring in Photography, Painting, sculpture, Animation-(2D/3D and Print Making-(Silkscreen, Linocut). Other skills he has acquired include: Photoshop C6 6-(illustrator, Photoshop, Premier, After Effects) and Auto Desk-(Mudbox, 3Dx Max, Maya). He has worked at Media Sea as a 3d animator and done many murals and commissions including one for Soulhouse Lodge.

He has always been fascinated with 3D animation, especially the creating aspect. It was the love of 2d animation that led him to the love of 3d animation. He loves painting more than anything else, painting is like meditation for him. An escape from the world’s heaviness. Illustration comes naturally to him, whether its through digital form, or old classic pen/pencil and paper.

Leigh Le Roux is an Illustrator and designer who loves creating new things and learning new ways of expressing the images that run around in his head. He was born in South Africa and Johannesburg is where Started drawing from 9 years old from watching cartoons and those cartoons turned into the illustrations I do today. There is no one single media he hopex to use but he has become accustomed to digital from working as a graphic design / Illustrator and UI designer. 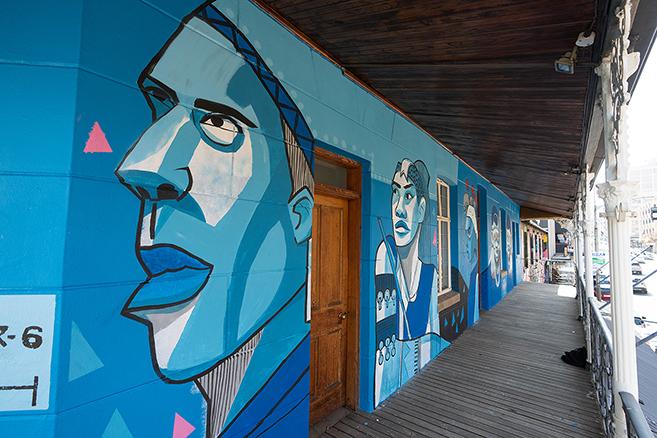