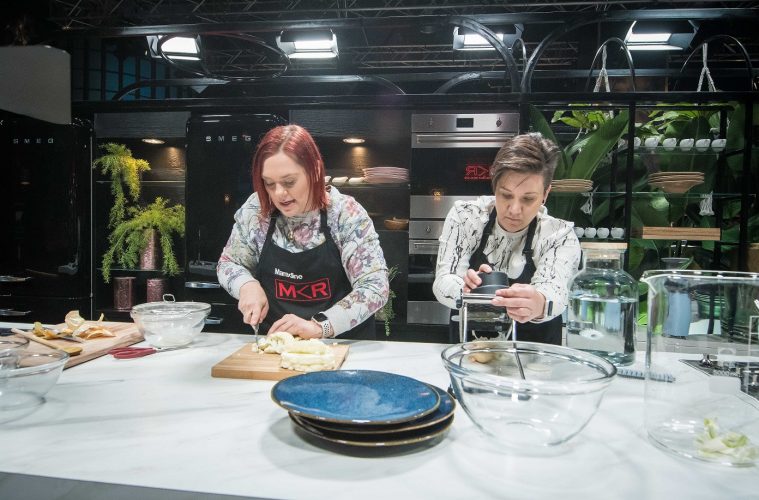 My Kitchen Rules SA bids adieu to one of the top performing teams, Maritsa and Maradine

Maritsa, a whizz at meat dishes, and dessert queen Maradine, impressed their fellow competitors and celebrity judges David Higgs and J’Something from the start of the series, but found themselves in a Sudden Death cook-off against Kim and Pashi, after failing to impress in a conscious-cooking challenge.

The girls from Bloem gave us some insight into their time in the competition.

The Interview: Maritsa and Maradine

Where did your love for food begin?

Maradine: When I was seven years old, I started baking and making flapjacks for my mom and dad in bed. Then I lost if for a while. Then when we become quite overweight and decided we should change our ways of eating. That’s where the really big food inspiration started for me and ironically I started making all these weird interesting desserts after that.

Maritsa: I grew up on a farm watching my gran baking her own breads, making her own butter and slaughtering the sheep. I grew up with it from a very young age and now I’m one of those people that can eat anything from the nose to the tail. It’s really a passion of mine.

What was your inspiration to take part in MKRSA?

Maritsa: I didn’t want to enter at first. Maradine bullied me very subtly into entering. So I decided let’s do this because what’s the chance we’ll even get in. We’ll just make a weekend out of it and come to Jozi and then carry on with our normal lives. Then the curveball was that they actually called us back. Through the process Maradine’s food dream then became ours.

Maradine: For me it was more about the validation of people in the industry. Being told that it’s not just your friends and family who think you’re good, you’re actually good.

You are both from Bloemfontein. What elements from your home city do you feel has influenced your cooking?

Maritsa: I was born in the Northern Cape, I grew up in the Eastern Cape and then I moved to the Free State in 2001. So I’ve been around. For me, being in the Free State, there are a lot of farmers farming the products which I grew up with, lamb and beef.

Bringing that farm style food to the competition showed people that we are normal home cooks. People like the familiarity of certain things when they eat. Things that make you think of home or your mom or your gran but them also something unique. This is what Maradine’s desserts brought to our cooking. 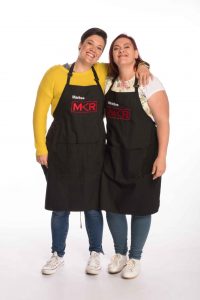 Chef David Higgs praised you for your dessert plating. What is it about desserts that brings out your creative flair?

Maradine: O my word, because I love sugar it started from there. I’m a photographer so it feels like I’m making an art piece. It’s the taste and I eat with my eyes so everything needs to look beautiful. It’s all about creating that piece of art that somebody is going to eat.

Maritsa: Whenever we go to restaurants it feels like the dessert is the last thought. The dessert should be the highlight. It should be what people remember when they walk out. It’s the last thing you eat so it needs to be memorable.

What part of the competition did you enjoy the most?

Maritsa: Our Instant Restaurant. Cooking in your own home it’s familiar and you enjoy it so much more. Letting people into your personal space was great. Also the Springbok we made in Upington. It was a dish we were very happy with and proud of. We love the area and the people and not a lot of people get to go there. The people there are crazy cool. The produce we got to cook with was so special and unique and you can’t grow it anywhere else.

What was your scariest moment on MKRSA?

Maritsa: When we heard we were going into Sudden Death. Hearing from the judges that we should cook only with veg and only using a certain amount of water. That scared the crap out of me. I don’t cook only with veg ever. I struggle to just make a normal salad. I need meat and protein in there somewhere.

Did your time on MKRSA impact your relationship in any way?

Maradine: Totally. It made our relationship so much stronger and it has grown so much in these couple of months. It’s crazy because it could have gone the other way around if we let it.

Maritsa: We learned so much about each other and we’ve been together for almost ten years. That’s quite special. It’s crazy cool to learn something new about someone when you think you’ve known them so long that you know everything about them.

Where to on your food journeys from MKRSA?

Maritsa & Maradine: We are currently doing special private dinners at people’s houses for friends or loved ones. It doesn’t matter if it’s for two or thirty people. That’s our food dream for now to prepare meals for people in the comfort of their own homes.

We take over your kitchen and cook with their favourite ingredients and make them something spectacular. Our biggest dream would be to open a restaurant in Bloem. A fine dining experience that Bloem has never had.

Maritsa and Maradine will certainly be missed on My Kitchen Rules SA.

What do you think about the way things went down for these two? Share your opinion on More Than Food’s Facebook or below!

Catch more episodes of the My Kitchen Rules SA on Sundays at 18:00 on M-Net Channel 101.

Tune in for exclusive, behind-the-scenes content and interviews at www.mnet.tv/mkrsa.