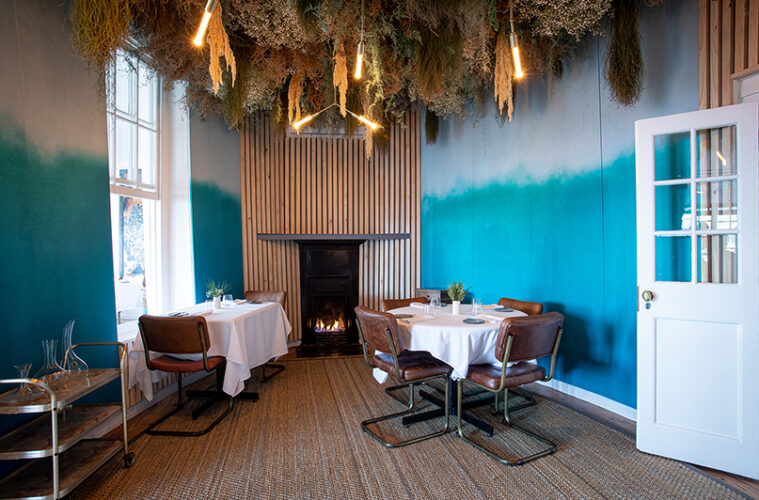 The historic Roundhouse property and award-winning restaurant enters the next chapter of its long and fabled story as it reopens with an elaborate and eccentric new look.

Salsify has reopened with a spectacular new look. The restaurant situated within the upper level of the historically significant building, The Roundhouse, has been given a stylishly eccentric new look, thanks to the skillful eye of interior designer Jean Francois de Villiers.

The iconic building, dating back to 1786, is one steeped in history, heritage and intrigue. The current and latest inhabitants of the space are the formidable Salsify at The Roundhouse team. The fine-dining restaurant having opened its doors in 2018, sees Chef Ryan Cole serve up modern-classical cooking in the historic space, with the sweeping views of the ocean and the majestic Lion’s Head as a backdrop. “It’s four years since we opened and we’ve now reimagined the space, building upon its past, and writing the next chapter of the famed roundhouse,” says Chef Ryan Cole. “It’s an evolution of the space, but it stays true to not only the building’s past but also Salsify’s sustainable, seasonal and local ethos.”

De Villiers was tasked with bringing a breath of fresh air to the space. The design process started with the selection of two key artworks, namely “The Vandalised Vicount” and “The Damaged Duke”, both depicting 18th Century figures – the likes of whom would’ve been similar to the guests of the then-master of the Roundhouse, Cape Sir Lord Charles Somerset. The prints complete with elaborate illusion frames have been defaced by spray-paint, with a vivid orange and electric line across each of their respective faces.

“It’s the bright colours of the paintings which have formed the basis for the tonal palette of the reimagined new space. Hues of green, yellow and orange, bringing a modern and youthful feel to the rooms,” De Villiers explains.

Entering into reception, you’re now greeted by “The Vandalised Vicount” who now hangs across from Louis de Villiers’ “The Governator” piece. The orange graffiti of the former carrying on along the wall it hangs on. The room complete with natural, untreated pine slatting, elements of green-veined marble-esque porcelain, a floral installation by Marissa Pretorius of Opus Studio and an orange, green and grey bench by Vogel offering but a taste of what’s to come. The center chamber and the heart of Salsify houses Jan Otto du Plessis’s 1.3m Lady Salsify, the half-gamebird, half-woman sculpture, under a dazzling golden ceiling illuminated by an elaborate vintage chandelier, surrounded by antique-aged mirrors. It’s a space that acts as a breather between the elaborate rooms.

The pre-dinner lounge has been converted into a private dining room – the Somerset Room – and is where you’ll find “The Damaged Duke” and a third Prince and Rebel piece titled, “A Little Party Never Hurt Nobody”, the Gatsby-esque quote spray painted in bright yellow onto a Regency-era inspired artwork.

Next the Seasonal Room brings the outside in and pays homage to the chef’s focus on sustainability and locality. Opus Studio have created a magnificent hanging floral ceiling installation, creating a forest-like illusion while the wall panels feature an oceanic print (by Cara Saven Wallpaper). Both ceiling and wall panels will change throughout the year, evolving in line with the seasons. The Sea Room – the main dining room – has too been given a new lease on life. The striking larger than life Louis De Villiers interpretation of Lord Somerset now looks over the dining room from its previous place in reception. The sea views and golden dazzle of the sun hitting the ocean reflected in the undulating golden thread graffitied the length of the room, while the Anton Kannemeyer stone pine prints pay homage to the forestry around the Roundhouse on either end. A custom commission by Mariëtte Momberg showcases the grand building linocut in gold against an old Cape Times newspaper – once again juxtaposing the old and new.

Adding another touch of curiosity and exploration within the ocean room are the “Naughts & Crosses” by Hennie Meyer, the ceramic pieces featuring characters, animals and flora adding another layer of interest to the eye-line of diners.

The windows are swashed in white voile curtains, which as if dipped in shimmering gold, are cut with a gold velveteen, creating contrast at table height. While elements of greenery once again merge the grounds with the interior of the historic space.

In-line with Salsify’s dedication to sustainability the restaurant’s existing Naturalis Fiver chairs have been re-upholstered with the brown leather which once covered the Seasonal Room’s paneled walls, while the rooms miniature antique chandeliers now hang above reception. The small vintage side tables and cabinets have been given a youthful new twist, with paintwork in vibrant hues adding a playful twist to the Victorian pieces.

Completing the new look are Hoi P’loy brass pendant lights with bulbs illuminating the space with a golden hue, while textured sisal carpets by Brightfield Natural Trading, cut to the uniquely shaped room, ground the space with its earthy feel.

The stunning refurbishment is but just one of the many ways Chef Ryan Cole and team are constantly striving for excellence, a constant exchange of inspiration between the 300-year-old building and its young, dynamic inhabitants. A space that compliments and contrasts the chefs seasonally driven, locally conscious fine dining, expert service and superb wine service.