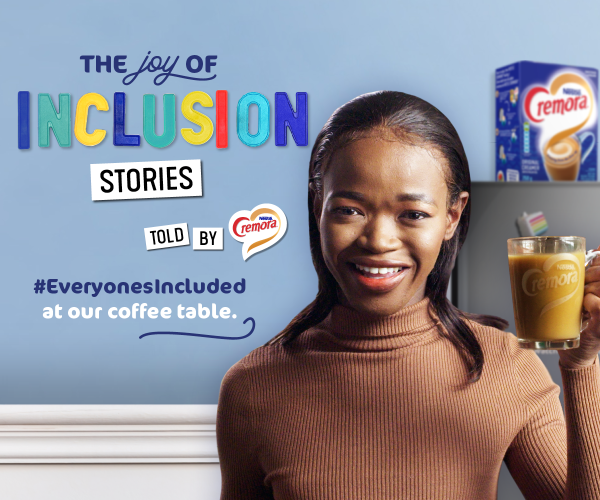 At the heart of what makes us human, lies a strong need to belong.

To be recognised and valued, to be seen and heard, to be welcomed and embraced into the fold of humanity, whatever our colour, creed, gender identity, body shape, ability or disability may be.

We all seek to be included, and that heartfelt desire is the inspiration and driving force behind the NESTLÉ CREMORA Joy of Inclusion campaign, which celebrates and provides a platform for organisations and individuals who are helping to make South Africa a better place for us all.

Launched in 2021, the NESTLÉ CREMORA Joy of Inclusion campaign reimagined the iconic “It’s Not Inside…It’s On Top!” TV commercial with a fresh cast of authentic characters from across the spectrum, including people with disabilities, people with albinism, and people from the LGBTQIA+ community. 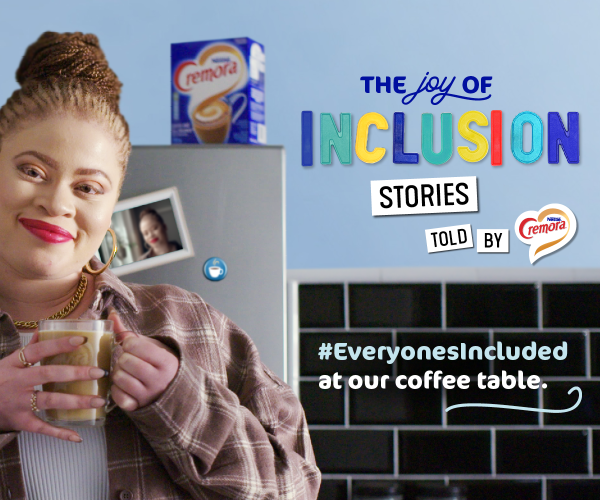 Now the campaign has entered a bold new dimension, with the introduction this week of the NESTLÉ CREMORA Joy of Inclusion Hero Voices, honouring a group of role models and inclusivity ambassadors who have had to overcome great odds to fit in with society at large.

At a brunch event held at the Human Rights Precinct in Johannesburg, the symbolic heartland of the rights of equality and freedom enshrined in the South African Constitution, popular broadcaster Bongani Bingwa set the scene for the campaign’s special brand of all-inclusive JOY.

“Inclusiveness isn’t just a constitutional obligation or a social and moral duty,” said Bongani. “It’s a JOY. Because when we break down barriers, when we shatter boundaries, when we remove the obstacles in our way, we make the circle of inclusion bigger. And by doing that, we sow the seeds for a brighter, happier tomorrow for us all.”

“When we speak of inclusion,” said Phume, “We speak of the diverse and under-represented. We speak of all the millions of people who deserve to be acknowledged, recognised, embraced, welcomed, and included in our hopes and dreams, and our plans for the best of all possible tomorrows. That is what we mean by the Joy of Inclusion.”

Bringing this vision to life, the launch event shone the spotlight on some of the Hero Voices of the NESTLÉ CREMORA Joy of Inclusion campaign. 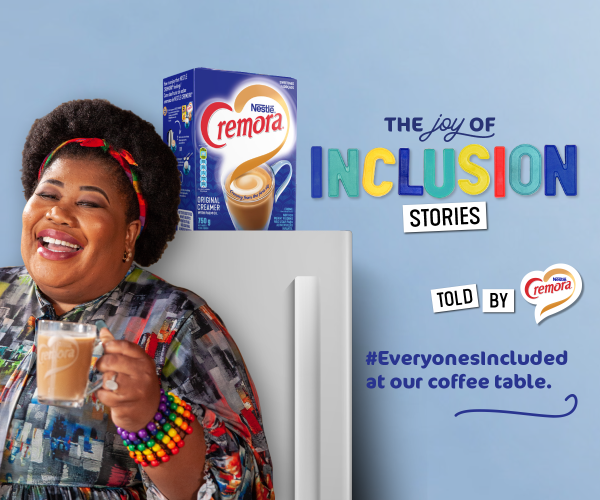 Present to share their stories and make their voices heard through a panel discussion were: Tobeka Lwana, businesswoman, communications expert, and ambassador for Inclusivity and Diversity, Anele Siswana who is a Clinical Psychologist focussing on mental health issues. Representatives from Nia Orchid, promoting body positivity; the Albinism Society of South Africa; and SADAG, the South African Depression & Anxiety Group. The campaign also features Boitumelo Rametsi, model, entrepreneur, and spokesperson for the skin condition, vitiligo representing Body Positivity; Mpho Mofokeng, model, TV presenter, skincare expert, and ambassador for the Albinism community; Gabriel Temudzani, stage and TV actor, and face of the often-marginalised Venda community representing language;  Masa Diamond, chartered accountant, fashion model, and ambassador for the trans community; Lelo WhatsGood, culture curator, multi-talented creative, and creator of safe spaces for the queer community; and Zoleka Mandela, writer and mental health activist, who has been open about her struggles with mental health, addiction, and abuse.

As Phume explained, inclusivity is a dynamic process that must embrace the power and meaning of intersectionality as a guiding principle in human relations.

“We recognise that individuals are complex and multi-faceted, that they can be many things at a time,” said Phume.

“A person who lives with a disability, for instance, may also be living with issues of mental health, and may also be embarking on a journey of questioning, change, and transition. When we accept that we are intersectional beings, we can learn to work together and understand each other better. We are all human. We are all vulnerable. And we are all stronger, and better, together, than we can ever be on our own.”

That’s the real meaning of the Joy of Inclusion. It belongs to us all, and it helps us to feel that we all belong!

For more information on the NESTLÉ CREMORA Joy of Inclusion campaign, please visit www.cremora.co.za, and follow us on our social media channels, @cremoraSA, https://www.facebook.com/CremoraSA, and Cremora SA on YouTube. #EveryonesIncluded