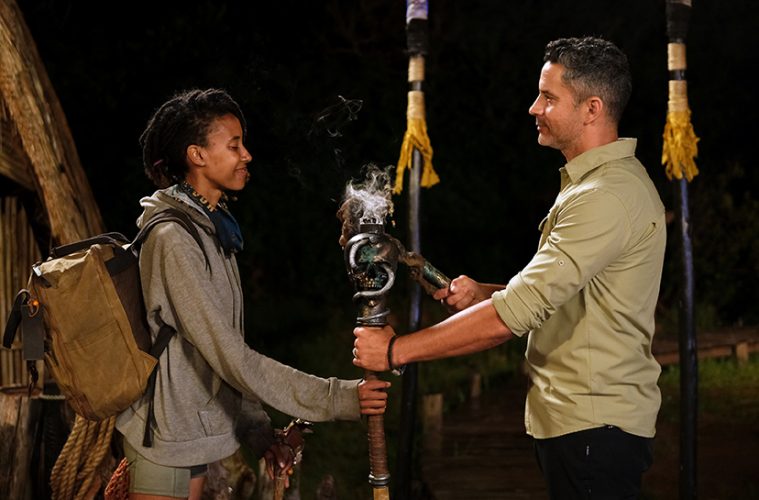 Operation Destiny is a bust as Anesu departs

Yoga teacher, Anseu, is constantly searching for ways to grow and evolve. She entered Survivor to find out who she would be when everything was stripped away.

She was certainly pushed to her limits and we delved deeper into how she changed and the mark she left on the game. 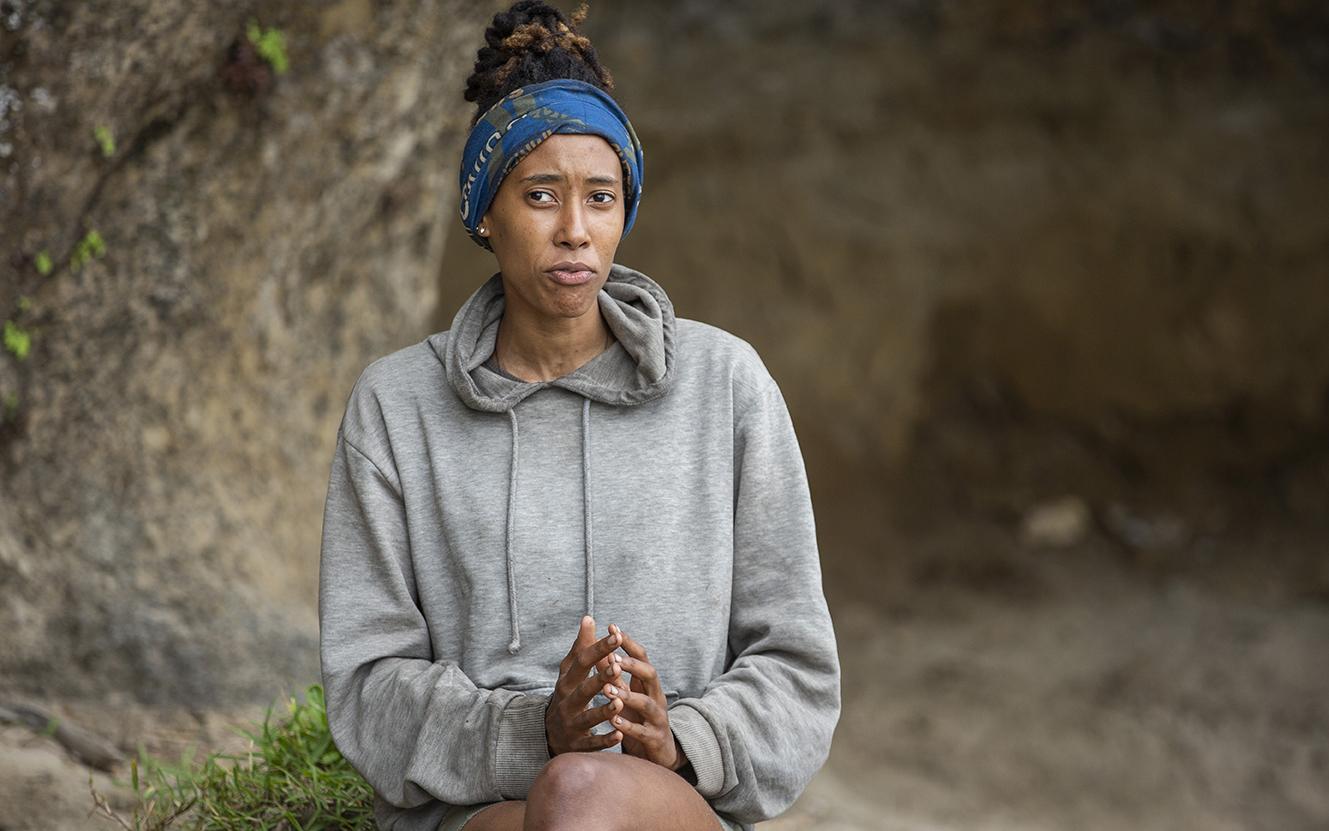 How did you feel watching your last moments at Tribal Council?

I felt a mixture of emotions. Hindsight is 2020 and that saying applies so much more when you’re talking about Survivor because often in the game there’s information or relationship dynamics that you aren’t fully aware. So, I think mine exit was a mixture of pride, I felt very proud for the type of game that I played and really leaving my mark, and then a mixture of wondering. If I had known what I know now, having used the episode, would I’ve made decisions differently? But at the end of the day as Amy said, we don’t dwell in the land of conjecture. You just have to really trust in the fact that you did the best that you could have and I have absolutely no regrets.

Did you see the votes against you coming at all?

I was very aware that I was at the bottom of my alliance but I didn’t think that they were willing to cannibalise our alliance as soon as they did. To give you some context to that conversation I had with Kiran in the episode, I actually spoke to Kiran and asked him about what his appetite was for making a big move. Kiran and I played very similar strategic games and he’s really good at making people feel comfortable while deceiving them in the background like I am. I asked him what his risk appetite was without going into specifics and he said no it’s the numbers and that wasn’t the right way to go.

His logic of it not being the right time did make sense so while I did suspect that I might be in danger I really wanted to make sure that it wasn’t my paranoia speaking. I think that’s end what ended up happening in the game where I thought if I worry about people trying to blindside me maybe that’s my paranoia that’s going to get the better of me. Rather let me focus on what it is but I have to do. If I get an inkling that something’s going to happen, hopefully someone will slip out or I just would you know intuitively be able to tell whether my name will go down. At the end of the day we’re playing against great players and I think the best play one at the end of the day. 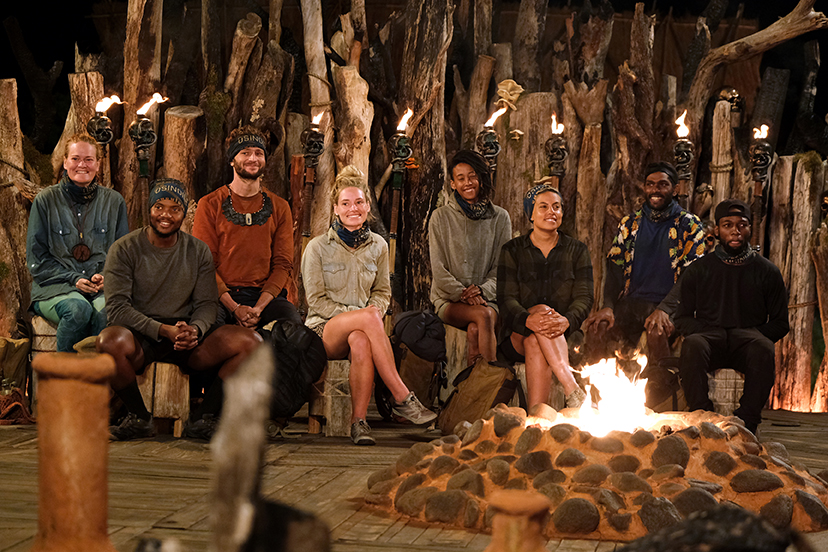 How does your elimination now affect the majority as well as the Destiny Trio?

I think this is going to be an interesting one. One of the benefits that both sides had of having me with them was that I was able to gather information and share it. Information that they might not have been able to gather themselves. Of course, I was able to tailor exactly what I shared but I think particularly for the Destiny Trio, Chappies and Santoni who are left, it’s going to be really difficult. That was part of my reasoning and leaving my Tribal Council Pass to Chappies because I was aware that in the next vote, considering that Anela and Nicole had decided to side with Tyson, Wardah and Kiran clear that they were going to have an uphill battle if they wanted to get to the end.

So, yes they’ve got a hidden Immunity Idol, I think quite a lot of the players might know about that because they learned about that advantage at the reward. I don’t think it’s going to be that easy to blindside those guys because they’re aware of the idol but they have got my Tribal Council Pass. I tried to be as discreet and secretive as I could be when giving that to Chappies. Hopefully no one from the Tyson, Wardah, Kiran alliance picks up on that and they’ll be able to play some big moves.

How did you feel about not having used your Tribal Council Pass?

Wow… So, my Tribal Council Pass was like those Chicken Licken with those orange orangutans to symbolise the cravings. I kind of felt like that’s what my Tribal Council Pass was it was. This annoying little thing on my on my shoulder that was really difficult to understand how to play. It wasn’t as straightforward as an Immunity Idol where I could play it and I would still be able to vote but be protected. it involved me either giving my vote away or taking somebody else’s vote. I really thought about learning the best trying to play my pass was.

My logic with this tribal was if I had played it, that probably the best-case scenario would have been playing that for myself. What that would have meant was that I think we probably would have seen maybe Anela joining the Vuna OG trio and voting out Nicole. That still would have left me, Chappies and Santoni in the minority with Anel and the Vuna OG’s in the majority and without a Tribal Council Pass. It was all of those reasons that led me to not play it and yes, I might have been safe for another vote but my threat level had already been exposed at that point. Knowing what I knew in the game I think I made the right decision in that moment. 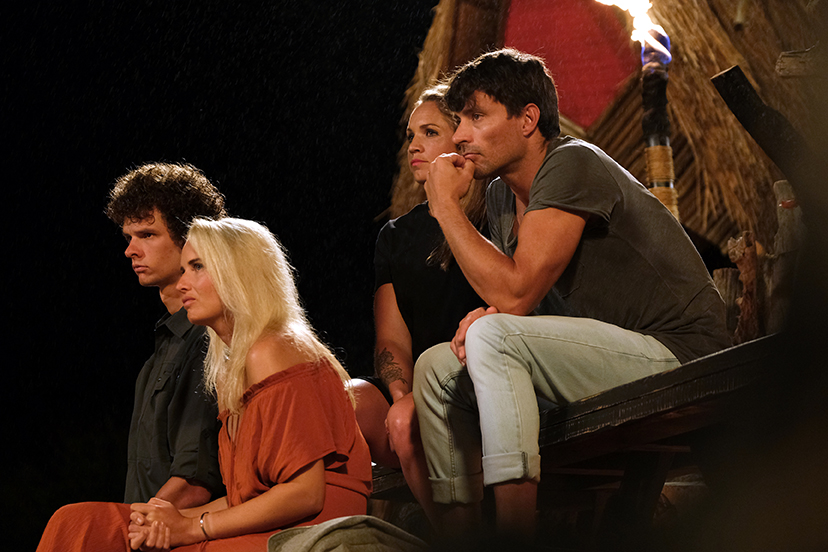 How are you going to approach being part of the jury?

I’m so excited to be a jury member. It takes a lot to be a responsible jury member. I think you need to keep in mind what people have Ponderosa’s relationships are, what relationships are forming there, how people still feel about the game and making sure that you’re paying attention at Tribal Council. I’m looking to take that decision very seriously and I’m keen to give my vote at the end to somebody who I feel outplayed me. I want to feel like the winner of our season represents our season well and I’m going to be scrutinising all the gameplay. I really want to see some good moves. Those were my parting words, to play big because I didn’t feel like some players were playing it a little bit safer than I would have wanted to play. So, I’m really looking for a lot of strategic game and people really going hard at Immunity Challenges. That’s what would make me vote for somebody at the end.

Who do you believe most deserves to be the Sole Survivor and why?

This is such a tough question. I think each player has something to say. I feel like we’ve got a lot of strategic threats in Santoni, Kiran and maybe even Wardah. I’m interested to see a little bit more of Wardah’s reasoning around how she played in the game. Was she pulling strings in the background with the boys? We also saw incredible physicality from Chappies and he’s also not a non-strategic player. And then you’ve got and Anela and Nicole who are so interesting because they’ve managed to survive as a minority almost from the start of merge.

Everybody has their merits and I think that’s what makes this season so great is everybody could give a great speech at final tribal. I think it’s going to come down to people pleading their case correctly and going all the way back to the start of the game and proving to the jury why their game one-ups all of the other great players that they might be sitting next to.