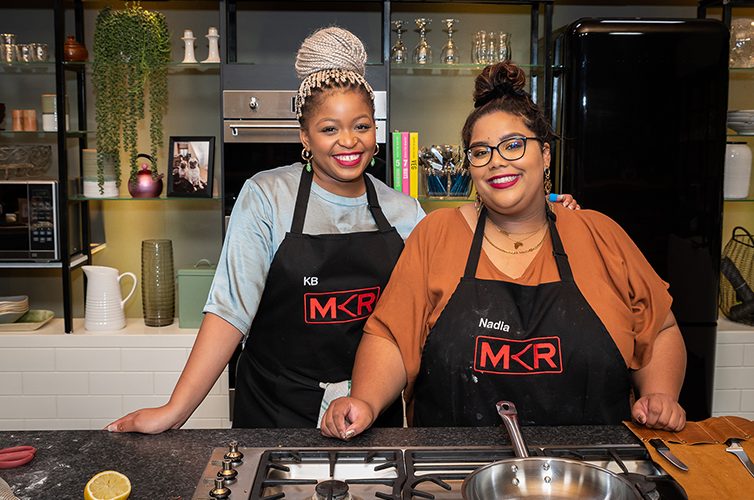 “Why are we waiting? It’s getting irritating”

Millennial BFFs KB & Nadia brought their youthful exuberance and YouTube cooking skills to the My Kitchen Rules SA kitchen this week, but were undone by good old-fashioned timekeeping and drew poor scores from a tired and hungry group of fellow contestants. The judges were slightly more forgiving of their poor time management and scored them far higher, putting them safely into the next round with a score of 60.

Their score bumped Bernadette & Shaleeni (59) into third place and put them behind Stella & Jeff (61) – meaning that Lebo & Lesego (53) are left waiting to see what food & wine consultant and food scientist Izak & Wessel score next week, to see if they will make it into the next round. 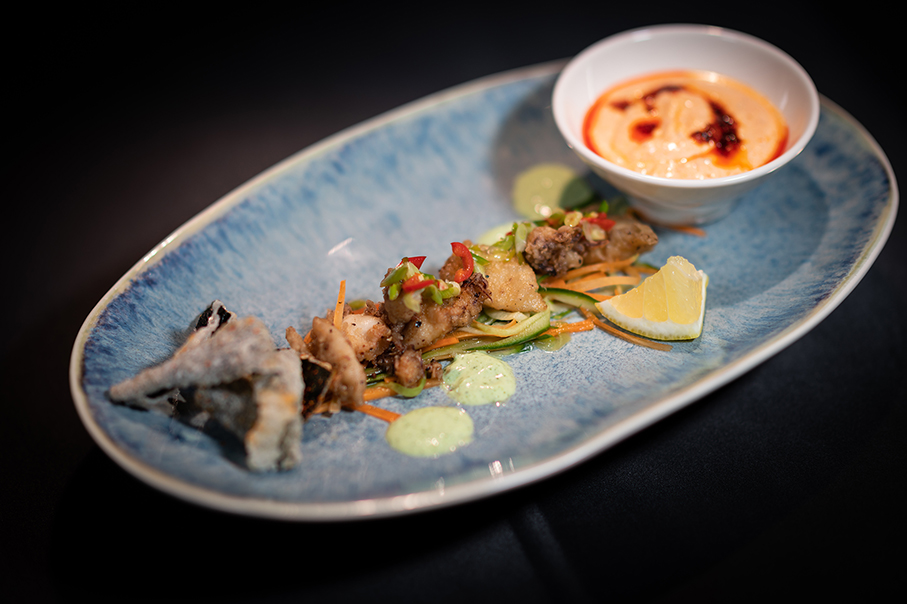 Their meal comprised a starter of Salt & Pepper Squid with a Sichuan chilli yoghurt dip, a main of Rib-Eye steak with chimichurri, cajun sweet potato, charred corn nibs and creamy avocado dots and a dessert of Brownie Bites with a Madagascan vanilla bean ice cream and berry gel.

Their vibey Instant Restaurant ‘The Garden of Eaten’ was designed to make their guests feel like they were sitting in the garden having a fun lunch with their friends – dominated by a bold neon pink name sign, plenty of lush foliage and the odd flamingo.

Once the menu was revealed, Bernadette raised her shellfish allergy, which had David heading into the kitchen to ask the ladies to plot a safe alternative for her. 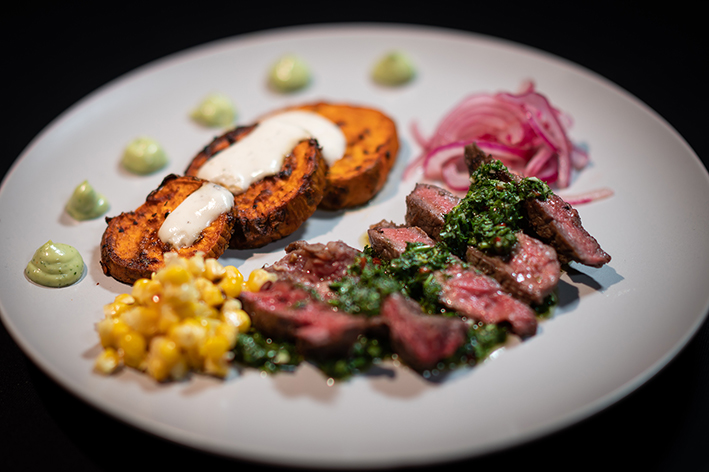 They quickly pulled together a Vietnamese spring roll substitute – and after a quick debate around whether the squid was cooked properly – delivered their first dish to the table.

J’Something thought it was a fun, delicious plate of food, but wished the squid had been crispier and carried more of the salt & pepper character. David said that their presentation had immediately caught his eye as being ‘restaurant quality’, but that the flavour had fallen flat because of a lack of salt. He ended with a prophetic warning to keep an eye on their timing and reminded them to make sure their food was served hot.

Shaleeni complained to Bernadette about a ‘crunchy, gritty’ element that she couldn’t identify, while Jeff was struggling to taste anything after the Sichuan chilli yoghurt set his tongue alight. Lebo also struggled with the dipping sauce, finding it unnecessary in the face of the presence of the coriander & herb dressing. Wessel echoed J’Something’s wish for more crunch – and Bernadette was disappointed in her substitute starter, saying it had no flavour. 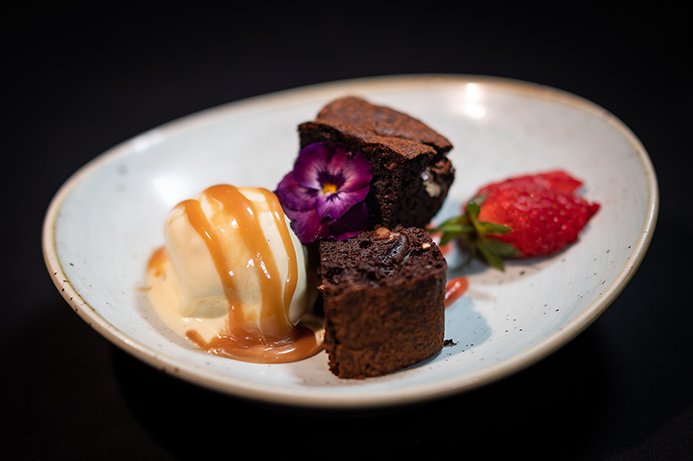 When the main course eventually arrived after a long wait which had energy dropping, David described it as quite easily the tastiest dish he’d ever been served in the competition. J’Something called it ‘happy food’ for the way it made both the palate and the body happy.

As Izak explained that he had found every element packed with flavour and delicious, Lebo and Lesego rolled their eyes. The latter declared herself disappointed and said all she could taste was the garlic from the chimichurri. A visibly annoyed Bernadette said the quality of the food was secondary to the length of the wait for it, ending with a sniping ‘if it was any good, I may have finished it’.

KB & Nadia were forced into another substitution for dessert, after a reminder about Shaleeni’s nut allergy. David noted that their vanilla bean ice cream hadn’t set as well as expected – likely due to there being too much sugar in the mixture. He enjoyed the chocolate and nut in the brownie, but felt the dish could have been executed better. J’Something said it was crying out for a bit of tartness to cut through everything, with the leading culprit for the cloying sweetness being the caramel sauce. 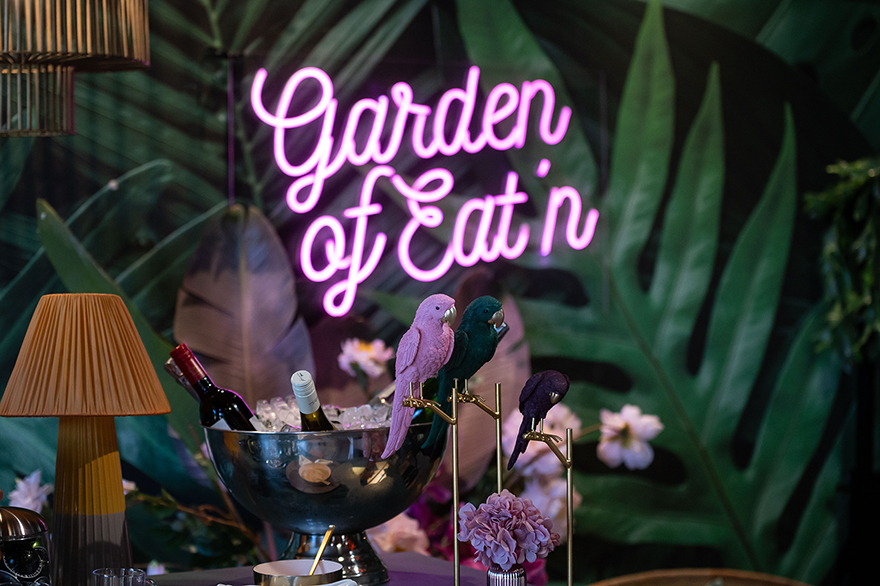 Izak found the brownie dry – the ‘curse of the dry cake’ continues to plague Table 2 – but enjoyed the play on strawberry with the gel. Shaleeni said the dessert was ‘neither here nor there’ and that the gel hadn’t added anything because it had been hidden away. Lesego said that the brownie had transported her to the Sahara desert – a nod to its cake-like consistency, though both Lebo and Stella had enjoyed the ice cream.

Izak & Wessel scored the ladies highest with a seven, but a five from Stella & Jeff and fours from Lebo & Lesego and Bernadette & Shaleeni left them with just 20/40. Bernadette said she’d expected less and yet-to-cook Izak said the scores had been an eye-opener that showed how ferocious things could get.

David said their starter had lacked salt and that the yoghurt and done nothing to lift the dish, scoring them a six. He felt their main could have been refined a little, though the flavours had been everything he’d look for in a dish like that, earning them an eight. He found their dessert unbalanced and said that their first three hours in the kitchen should have been utilised better, scoring them a five.

J’Something gave their starter an eight because of its vibrancy, marking them down for a lack of crunch. He enjoyed the way their main had delivered both flavour and nutritional value, also awarding it an eight. Though the combination of the flavours listed in the dessert had gotten him excited, he’d found the result overly sweet, scoring them a five.

Closing out the Instant Restaurant phase of the competition next week – where one duo will go home – are Izak & Wessel.