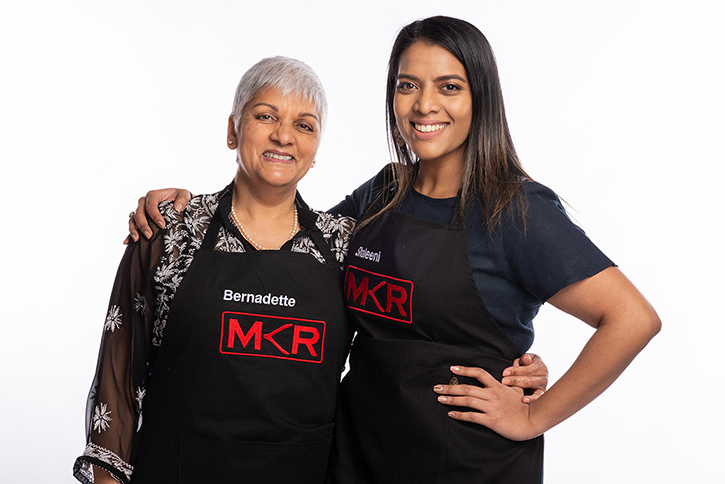 A Taster of My Kitchen Rules SA’s Group 2 Contestants

The first group of My Kitchen Rules SA has been served – and now it’s time to meet the five teams who make up Group 2. You’ll see them on screen from 24 October at 18:00 on M-Net Channel 101 – but we have a little amuse bouche for you, before then. Remember that these ten contestants will be hoping to impress judges David Higgs and J’Something enough to make it through to MKR HQ… and ultimately walk off with the R1 million prize!

Meet the second five pairs of home cooks who’ll be looking to win the third season of My Kitchen Rules SA: 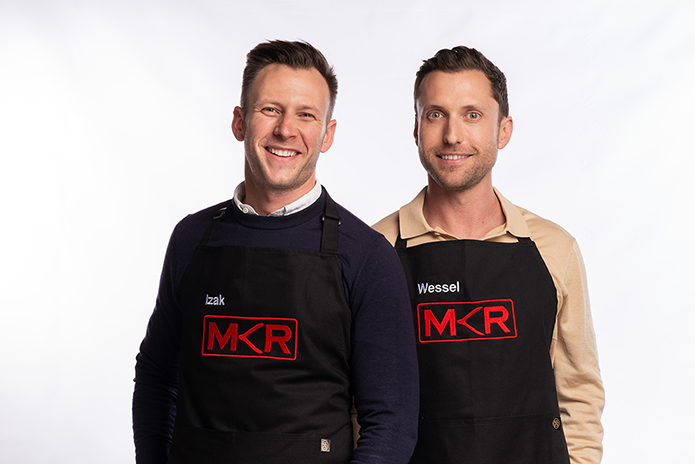 Izak and Wessel met in 2007 at Stellenbosch University when they found themselves in the same residence. They soon found friendship in food and have met up almost every day for a coffee and catch-up, ever since.

Wessel learned to cook from his mom, and a little from his sister. “I used to spend days sitting on the kitchen counter watching my mom cook and helping her chop or peel something. She used to bake for a home industry in East London after she had four kids and wanted to work from home, so I remember always watching her make toffee apples, caramels, fudge, marshmallows etc,” he says.

Izak’s mother was very involved in the community and he grew up as her sous chef in the church kitchen, cooking huge pots of curry. “Our whole family enjoys good food and time together is normally spent in the kitchen or around the dinner table. My mother is my go-to for advice on any kitchen hiccups,” he says.

While Wessel’s food science background influences his cooking, Izak is an avid forager whose cooking is influenced by the fresh produce he sources. 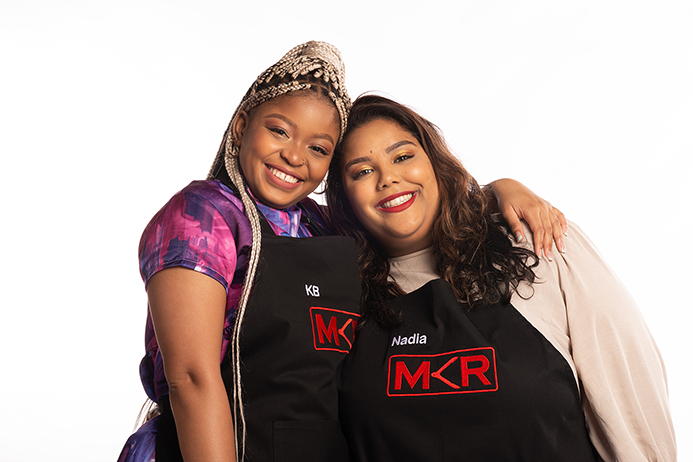 Friends since Grade 1, KB & Nadia love to cook and have their own cooking competition with their friends – which everyone takes very seriously. KB (short for Kgabiso) says her mother taught her the basics of cooking when she was young, but she’s steadily built up her knowledge from cooking shows and YouTube channels. “My passion for food mostly comes from watching cooking shows. I remember the day it started – I was watching someone make fried chicken on a cooking show, so I got up off the couch at midnight and decided to make fried chicken. Everyone in my household was super confused!” she says.

Nadia says that both her parents are great cooks, so her skills are hereditary – supplemented by cooking shows. “My food style is definitely fusion, mixing Asian, Indian, Italian, French and Mediterranean to create light meals that are flavoursome and fresh. I wouldn’t turn down a wholesome hearty ‘spag bol’, stew or curry though!” she says.

Their food dream is travelling the world together, trying different cuisines from different places and adding their own spin. 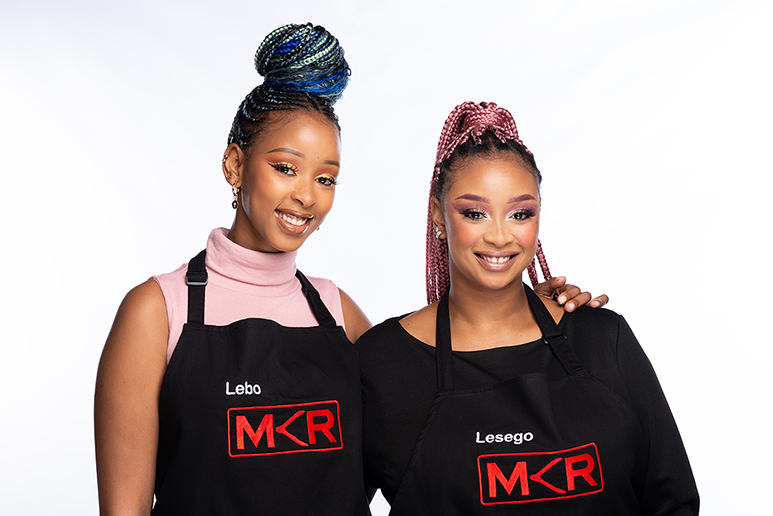 Lesego is adamant that there’s no head chef in the kitchen when she and sister Lebogang cook together. “We lead depending on who the stronger cook for a particular dish is,” she says. She dreams of owning a café, hosting great food & music sessions and providing free food for students who can’t afford food. “We’ll be looking to bring amazing food and a little bit of spice to the MKRSA kitchen,” she promises.

Lesego describes her cooking style as “homey, hearty and full of flavour – not overly complicated”, while Lebogang calls hers “simple, flavourful and colourful”.

Lebo agrees with her sister that their parents and family taught them how to cook – but claims a fair amount of credit for teaching herself, too. She says that things get electric in the kitchen when she and her sister cook together, though they do work well together. “She’s my rock and I draw strength from her – we’re each other’s superfans,” she gushes.

Having been born & raised in Grahamstown and then lived in New York, working as an actor before returning to South Africa to live in Cape Town, you’d think Shaleeni would have a cosmopolitan cooking style – rather, she says: “My cooking style is quick, simple and creative. I don’t like recipes very much”.

She grew up cooking with plenty of freedom in the kitchen, under the watchful eye of her mother and grandfather, which is reflected in the way she enjoys eating with her family. “A typical meal involves a whole bunch of people at our family dinner table and a nice family style meal of roast chicken, roast veggies – or, if it’s a Sunday, my mom will make a chicken curry for us”.

Bernadette also learned to cook from her mother, father, grandmother and aunt and describes her food style as ‘quick, easy and traditional’. Her food dream is to open a restaurant or coffee shop with Shaleeni, saying that their dynamic in the kitchen is good because they know each other’s strengths and get on with the task at hand. “We’re usually well prepared and there’s not much talking. I’m more traditional and sometimes not as adventurous about trying new foods as Shaleeni,” she says. 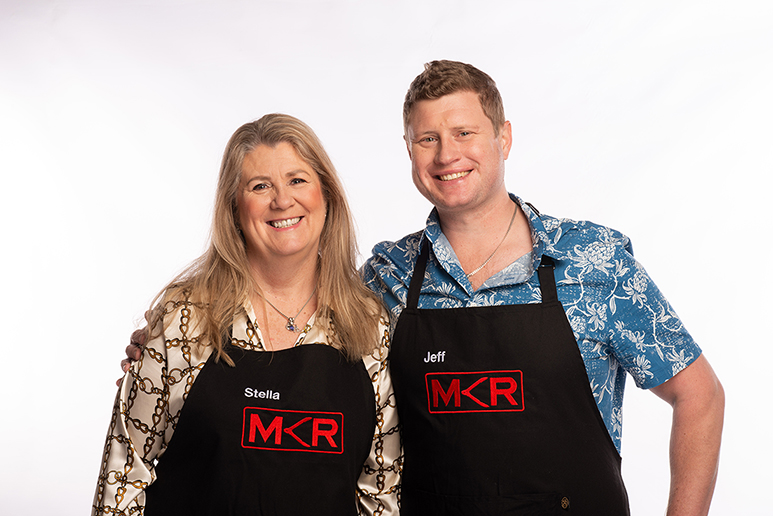 Stella says that she and son Jeff have enormous respect for each other, as family and as friends. “We understand each other’s quirks, sense humour and just generally have fun when we do life together and with our respective families!” she says.

She says that she taught herself how to cook, however her ‘Oumie’ – her second mom – showed her from a young age how much love, caring and pleasure can come from being in the kitchen, putting that joy into her food. “Even simple, humble dishes in the home of a poor missionary were full of love and deliciousness,” she says. Her food dream is to run a ‘living restaurant’, where small groups of friends and family have a whole weekend away. “It’d be a place where I feed them with great food, day in and day out, but they also get to restore their souls at the same time”.

Jeff says that he entered MKRSA because his mom really wanted to enter as a challenge for her 60th birthday but she needed a partner, so he said he would ‘give it a go’. He says she taught him all he knows about working in the kitchen, while his ‘braaimaster’ dad taught him how to cook over fire. “My food style is simple, tasty, and if it can go on the braai, then I’m very happy”.