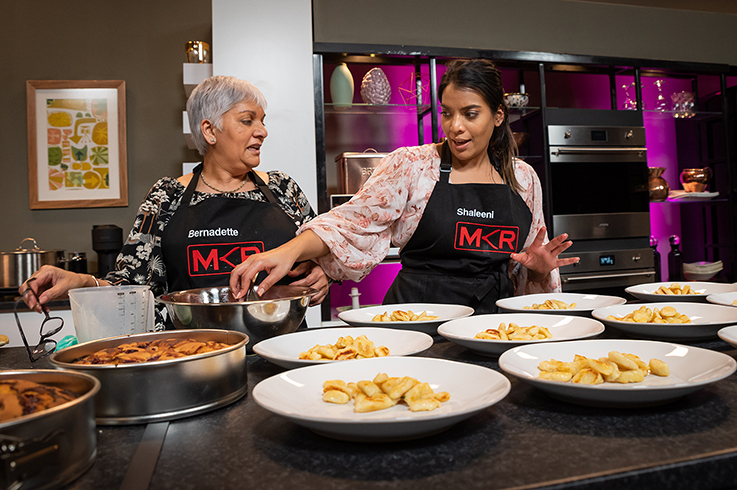 Bernadette & Shaleeni Saved by their Starter

Adventurous Mom & Daughter duo Bernadette & Shaleeni’s efforts to impress at their My Kitchen Rules SA Instant Restaurant started off smoothly, but they soon came undone in the kitchen – though their score of 59/100 guarantees them a spot in the next round.

Everything on their shopping expedition went smoothly and things were really flowing in the kitchen under Head Chef Shaleeni, but getting their potatoes boiling late for their gnocchi soon cascaded into their tomato sauce catching on the bottom of the pot, struggles with a potato ricer, unexpected gnocchi results thanks to a first-time use of ‘doppio zero’ flour and an exploding basil sauce bottle which deposited its entire contents on 1 of the ten plates. 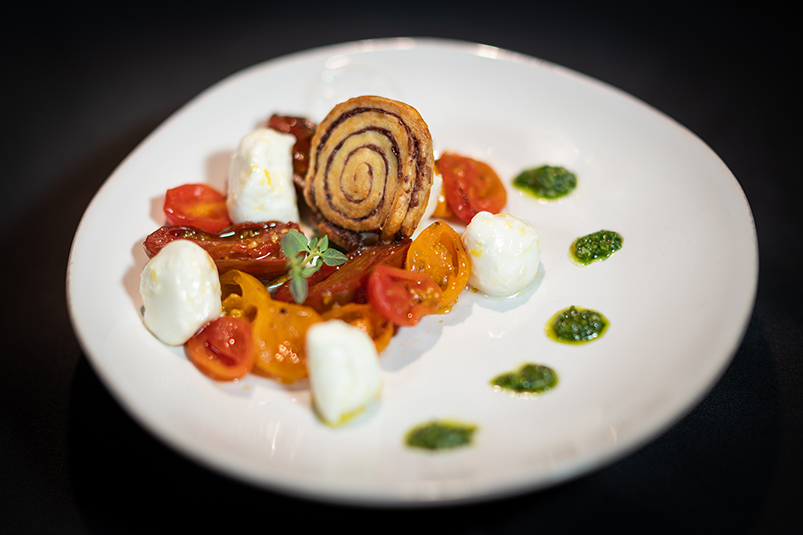 Their menu comprised a starter of Caprese with confit tomatoes, parmesan olive crisps, bocconcini & basil sauce; main of slow cooked pulled lamb ragout and gnocchi and dessert of Morello Cherry butter cake with vanilla Chantilly cream and cherry & orange liqueur sauce. Their understated, floral Instant Restaurant was named ‘The Long Table’ for a restaurant in their home town, Grahamstown, which is near and dear to their hearts.

After a minor spat between Lebi and KB where the latter irked the former with a comment about not liking olives being ‘childish’ – with Lebo having concerns about the parmesan olive crisps in the starter – Bernadette and Shaleeni delivered the offending dish. 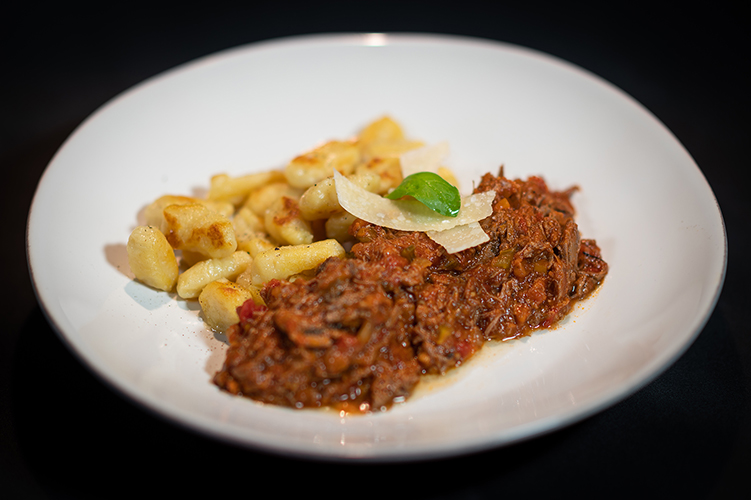 J’Something loved the basil sauce and praised everything on the plate, but was left hankering for more of the parmesan olive crisp. David loved the crisp, saying it had really made the plate work for him – but he’d wanted more olive, which meant that the dish lacked a bit of salt. Wessel and Lebo loved the flavours and Jeff said it was a dish which could easily convert him from a ‘red meat loving South African’. Nadia loved the flavours, but wondered out loud whether the dish wasn’t too easy to prepare.

Having struggled with doughy gnocchi in the kitchen – and unsuccessfully trying to hide the ‘goopy’ dough from David’s prying eyes – Shaleeni declared the gnocchi ‘as good as we’re going to get it’ and delivered their main. 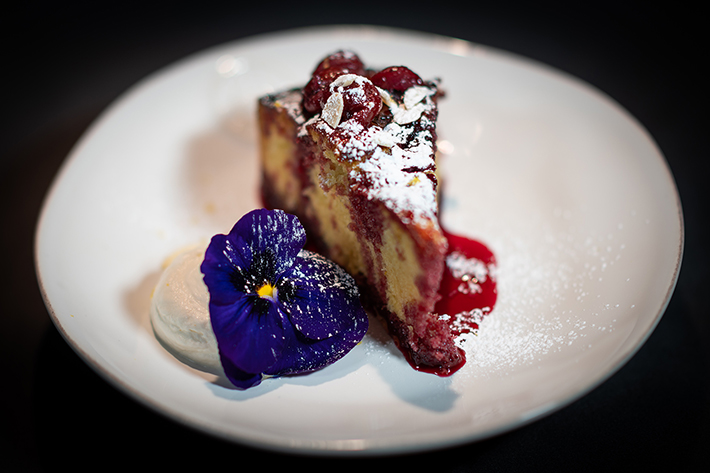 David felt that pulled lamb and ragout were two different dishes and he’d certainly found that when it came to the flavours on the plate. J’Something said that their gnocchi wasn’t gnocchi and that while everything had flavour, he would have loved to see something fresh on the plate.

After sister Lesego declared that the only ‘wow factor’ in the dish was a lack of ‘wow factor’, Lebo was left to unravel a long, dark hair from one of her gnocchi. Stella found the dish a bit acidic but enjoyed the lamb, while Izak echoed J’Soemthing’s thoughts on the gnocchi, saying they were more like heavy Eastern European dumplings than a pillowy Italian ones.

Bernadette and Shaleeni struggled with their cake which dried out too much in the oven, relying on the liqueur sauce to moisten it a little and hoping for the best, having taken the Judges’ criticism of their main course on the chin. 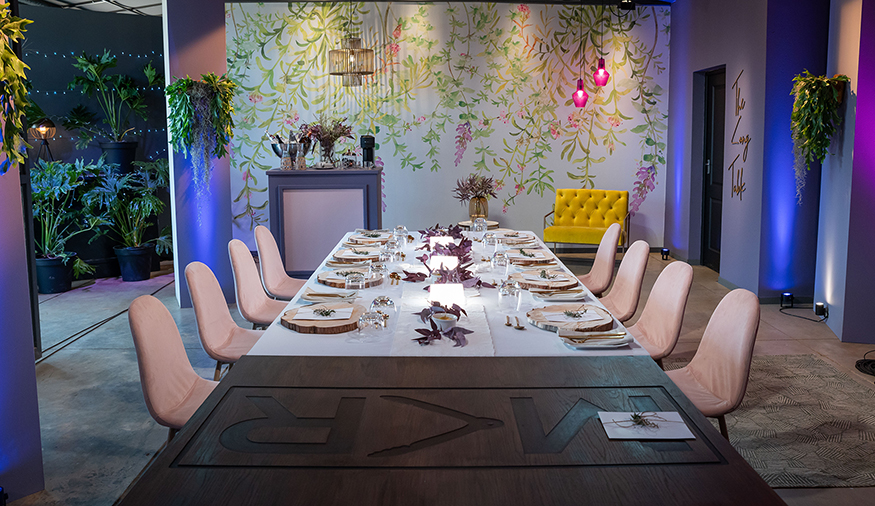 David immediately confirmed that they’d overcooked the cake and suggested that a way to save it from a crumbly fate was to cover it in clingfilm and put it in the fridge for a while. J’Something found it delicious, if not try, praising the interplay between the tart cherries and sweet cream.

Stella found it tasty, though dense and dry, while Jeff enjoyed the Chantilly cream. Lesego found it very sweet and Nadia found herself not enjoying it, despite really wanting to.

The contestant scoring delivered an interesting result, with the two duos who are yet to cook – KB & Nadia and Izak & Wessel – both scoring Bernadette & Shaleeni 6/10 and the two duos whose time in the kitchen had already passed, scoring them a lower 5/10, for a total of 22/40.

David praised their starter as ‘a beautiful dish’, with a special mention for Bernadette’s excellent pastry technique on the parmesan & olive crisp, scoring it a 6. J’Something called the starter ‘a clever interpretation of a classic’, giving it an 8.

For the main, David said that they’d really have had to make the perfect gnocchi to ace the dish, but they’d failed – earning them a 5. J’Something reiterated that the ragout had had great flavour, but agreed that the gnocchi had let them down, scoring them a 5. David found the dryness of their dessert hard to overlook despite the lovely balance of flavours, scoring them a 6. J’Something felt the same way, but gave them a slightly higher 7.

Next to step into the My Kitchen Rules SA kitchen in a bid to prove their home cooking credentials are millennials KB & Nadia, next week.