Listen to CONQUER by Tome

Conquer because you can!

A book, often one which is big and heavy. 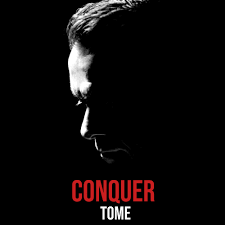 Conrad Muller, known as Tome in the music industry, has recently entered the airwaves with his first and current single, Conquer. Life is a road paved with all descriptors of nooks cracks we trip over but Conrad insists that he wasn’t quite ready for the rock-esque ballad to manoure around the world so fast. He remarked:

“Kind of like a deer in the spotlight at the moment like what the heck. Who else wants to interview me now?”. There are two aspects contributing to this resounding success-story, read on to see how Tome materialised!.

“When my brother was diagnosed last year, with cancer, it was a serious wake up call.”

Daniel was Conrad’s top-tier fan and suggested many times that Conrad should release (At least) one song! Throughout the years it had never  occured to the musically talented engineer that a life of a lyricist would manifest itself.

His decision to release came from a promise he kept to conquer and overcome. He said: “it was more a personal experiment”; additionally, It’s about remaining humble and asking for help, according to Mr Muller. In pursuit of recording this chart-topping narrative  the musician used his winning personality and intellect to network and the opportunity found him.

Conquer: to gain mastery over or win by overcoming obstacles

Expectedly, Tome bares a lot of symbolism for Muller and the resounding success isn’t “just

releasing a song” as many would speculate, it runs deeper. The lyrics and the portion of Tome’s story has stirred up a barrage of emotions to anyone relating to the story of how Tome materialised. “I think I’ve, I’ve, I’ve experienced enough in life to be able to bring forward stories that people will connect with.”; In retrospect and thinking forward, Conrad hopes he’ll continue sharing the stories in his tome and holds out for more to tell.

“ I feel that I’m at a maturity level now where I can I can balance my life. I probably wouldn’t have been able to balance that properly before. It’s such a cliched thing. But when you say something here that says The time is now you need to follow that gut instinct and that gut feeling because then you won’t. If you don’t follow that gut instinct. And for me, the time was right now. I think I’ve, I’ve, I’ve experienced enough in life to be able to bring forward stories that people will connect with. I hope. Hope so. Just continue this wonderful story that is”

The lyrics came from Conrad’s heart but his humble beginnings aren’t necessarily beginnings for everyone else involved, he is courteously aware that years of work and experience were needed by his team in the studio, the very dear Genevieve Viera, from Indie PR and his family – namely Daniel living on in the narrative – and all the people who have come and gone throughout the years.

“I need to be very aware. If the song came from me, but without other people, I wouldn’t be sitting talking to you. So like I said in the beginning, I’m very humble. Very thankful.”

The story isn’t beginning, it has begun and we are all in the storybook of our lives, the ‘tome’ is now! Now, to you, dear reader. Listen to Conrad’s latest single and think:

How are you going to conquer and overcome? You are so able and totally worth it!