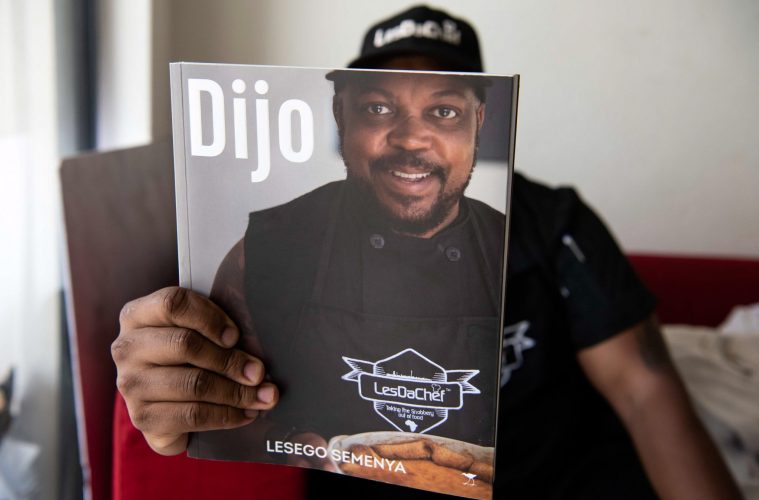 Q&A with Lesego Semenya a.k.a. LesDaChef

Lesego Semenya, more affectionately known as LesDaChef is a man filled with passion and ambition. After taking the leap and quitting the corporate world, Lesego enrolled at South Africa’s premier chef school, Prue Leith Chef’s Academy in Centurion, to study towards becoming a chef. He qualified with a Grande Diploma in Food and Wine and 5 other international level diplomas in wine and patisserie.

He has subsequently gone on to work at The Westcliff under renowned chef Nicky Gibbs and in 2010 he took part in a World Cup pie designing competition. His pie, based on a township Kota, won and was named the Official Pie of the visiting British football fans for the 2010 FIFA World Cup. The prize included working in a Michelin Star rated restaurant in London owned by Richard Corrigan.

Lesego has gone on to work as a personal chef for a renowned family in Irene, catered to Howard Buffett (Warren Buffett’s son) annually, catered for The British High Commission as well as Liverpool FC. He has also catered for numerous South African celebrities as well as renowned international celebrities.

I was lucky enough to spend some time getting to know this incredibly ambitious chef a bit better. Check out the tasty tidbits from our conversation below. 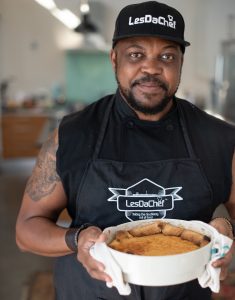 Where did your food journey begin?

Unofficially it began in Soweto growing up with my parents and grandparents. Food was always a central feature and meeting point. Visitors would randomly show up and my mom would always fuss over what to feed them. I also grew up seeing my dad cook for us, his favourite season was winter as his domain was soups and stews. It was only later in life, when I left engineering and went to chef school when I started treating food as a career.

What is it that gets your creative juices flowing?

Nostalgia and memories. I always tell people that every dish has a story and every story has a journey. Nostalgia is a great muse for creativity.

Who is your foodie inspiration and why?

Anthony Bourdain is my hero when it comes to the world of cheffing and culinary arts. More for his personality and rouge spirit than his actual cooking. I loved how open and honest he was as a chef, he lived with his heart in his sleeve.

Tell us your most delicious story from your career so far.

I grew up loving township fast food. Kotas are my weakness. In 2010 we were challenged to come up with a pie that would wow the British fans during the World Cup in South Africa. I decided to turn the ingredients one would find in a typical kota into a fine dining pie. The pie was named the Official Pie of the World Cup by the British High Commission. It has mature cheddar, home made sun-dried tomato sauce, chopped Russian sausage, buttered potatoes, chopped artchar, home made puff pastry and a few other decadent ingredients.

What has been your most challenging culinary challenge so far?

Catering a 7 course wedding for 700 people. I will NEVER do that again. Oh and the World Cup kota pies I mentioned above? We had to make 1200 of them for the British High Commission.

What is your favourite dish to cook and why?

I love lamb shank. I think I love it because of how simple it is but also how rich and tasty it becomes. It smells so good and it will always get people going “wow” when they see it on a plate.

Which local and international chefs would you most like to meet or work with? Why?

I’ve been lucky enough to meet a lot of fellow chefs. The one I’d probably love to work with the most would be Gordon Ramsay simply because I have the same kind of dry, sarcastic humour and he hasn’t sold out his chef techniques to become popular.

Which South African chefs do you admire/follow and why?

Hmmm, that’s a tough one. I admire Reuben Riffel a lot as he has managed to run restaurants successfully whilst also being in the media’s eye and writing books. It’s a tough thing to manage. The same can be said for another chef I admire, Bertus Basson. He too seems to be able to manage the spotlight whilst also running restaurants.

What is your biggest food goal?

To own an organic farm in South Africa with a restaurant and culinary school on it. Educating South Africans on our lovely cuisine whilst also serving farm-to-table food is my ultimate goal.

If you were to create a dish inspired by our county at present what would it be and what would you call it?

My book “Dijo” is actually all about that. Taking our South African heritage and turning it into awesome recipes and dishes. If I was to create a dish right now I’d take elements from all over the country like Malay curries, natural starches like sorghum from the North, lamb from the central part, traditional veggies from the east and bring them all together. SA’s best asset is its diversity. I’d simply call the dish “Us”.

What’s next? Where do you see LesDaChef in 10 years?

There are some TV shows in the pipeline, a follow up book, I’m building a brand new kitchen as well and hosting classes to share my cooking knowledge in between running my culinary solutions business. In 10 years time I hope to be running my culinary school and restaurant and be out of the limelight! 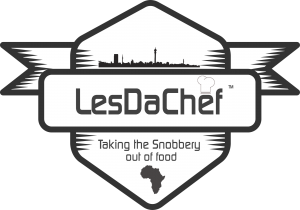