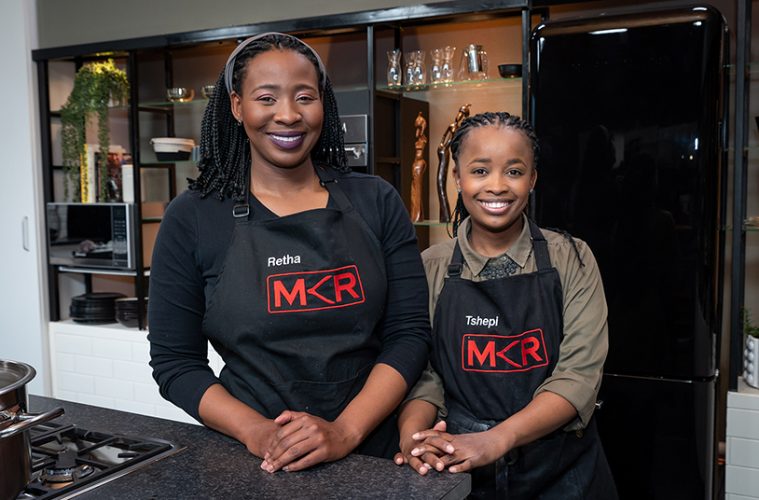 Globetrotting besties Retha and Tshepi swept to the top of the leaderboard after this week’s episode of My Kitchen Rules SA after impressing the judges – but apparently not their fellow contestants. Their 70/100 comprised a fairly average 26/40 from the contestants and a positive 44/60 from the judges, to put them clear of Nevi & Craig (64/100) and Karen & Tenille (61/100). 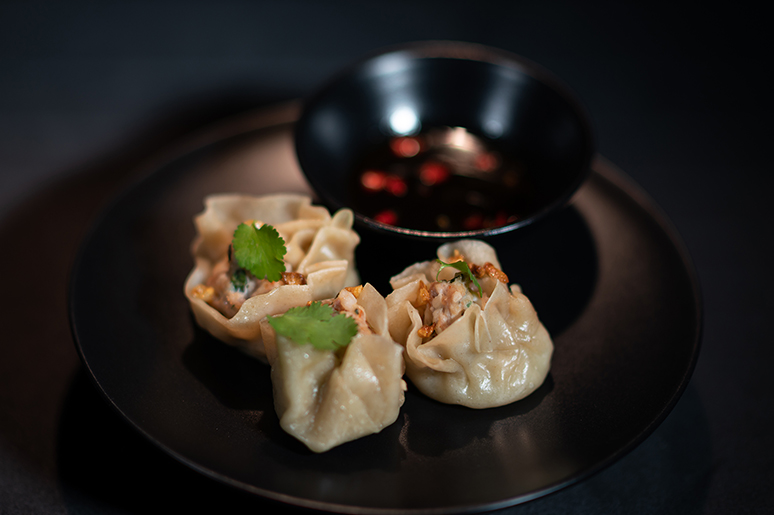 The global citizens based their menu at their Instant Restaurant – christened ‘The Dinner Club’ and subtly decorated in black & gold – on their ‘Bucket List Menu’, serving up a starter of Sui Mai; main of Beef and dessert of Mochi. There were alterations to the starter for Tenille, who has a shellfish allergy – chicken & mushroom standing in for prawn & pork – and the main for Nevi, where chicken took the place of beef.

With the judges impressed by their menu, the challenge was for them to pull it off amidst a bit of friendly competition about which was the best cook and who would be taking the lead in the kitchen. 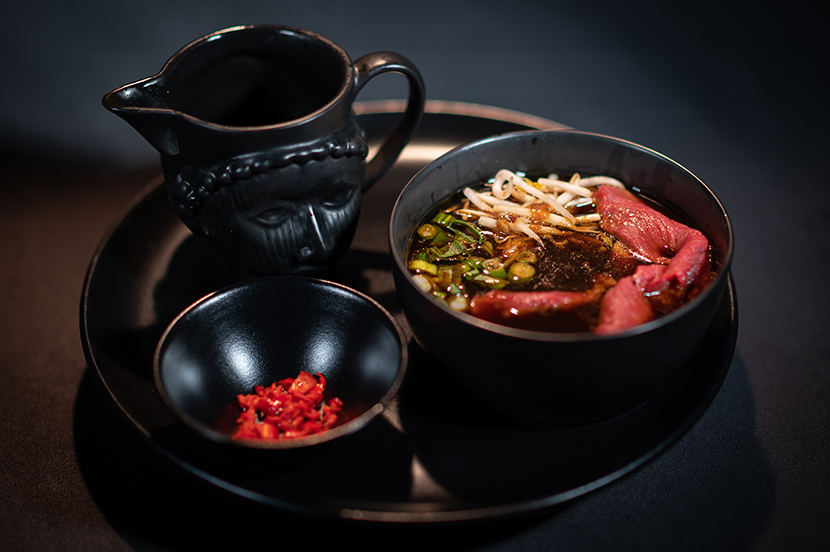 The other contestants arrived to a welcome Margarita, with Nevi & Craig and Karen & Tenille all commenting that the Instant Restaurant space looked classy. Tshepi told everyone that they were hoping that everyone would be open to trying some new foods, which may be unfamiliar to some of them. As the duo returned to the kitchen, Brett admitted that he had forgotten that he was in a competition and really just started enjoying the evening as a dinner party.

Despite Brett forgetting where he was for a moment, MKR SA remains a competition – and Retha & Tshepi stepped up to the plate with their starter. David described the filling as ‘beautiful’, despite the cracked dough, while J’Something thought it looked and tasted perfect, despite the dough being a little dry on the edges for his liking.  While Brett said he could see the evening’s cooks were feeling nervous, he thought their dipping sauce was the perfect balance of sweet & sour, while Aidan noted that there weren’t many dumplings left on plates, around the table. “I feel like I’m in heaven,” declared Palesa M. 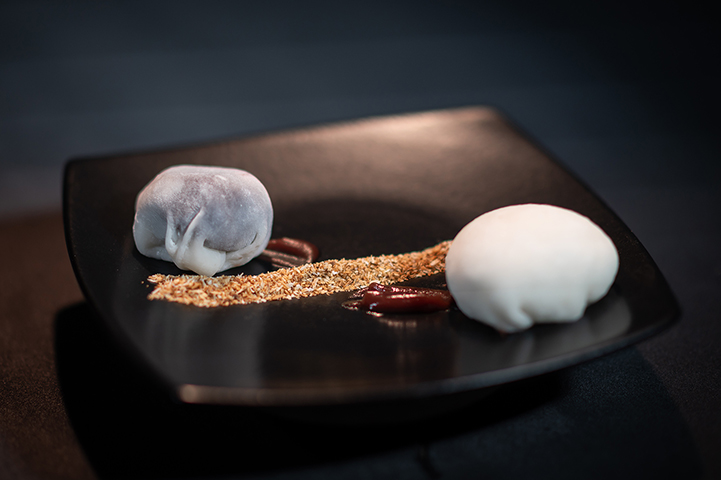 Retha had struggled to get flavour into her beef broth in the kitchen, so was more than a bit nervous when they served the main course. If J’Something’s comment that ‘it tasted like you came here to try to win this competition’ wasn’t validation enough, David’s comment that it was honestly one of the nicest things he’d tasted in a long time had her sobbing in relief. As they departed to prepare dessert, the other contestants got stuck in. Craig appreciated the ‘golden shine’ on the broth, but Karen was left wondering why she didn’t get the same punch and flavour that the judges had praised. Palesa N also felt she could have done with a bit more seasoning, while Aidan said the noodles had been his favourite part.

The duo of Mochi – one stuffed with homemade coconut ice cream and the other with a strawberry enrobed in red bean paste – was new to all the contestants, bar Karen and Tenille, who’d had it before and even made their own. Even David declared that he wouldn’t know a Mochi if it stood up on his plate and danced for him! He enjoyed the flavours, but said that he’d felt they’d missed a trick by not jazzing up the presentation with some vibrant colours. J’Something said they’d continued to deliver on flavour and called the addition of the strawberry ‘genius’. 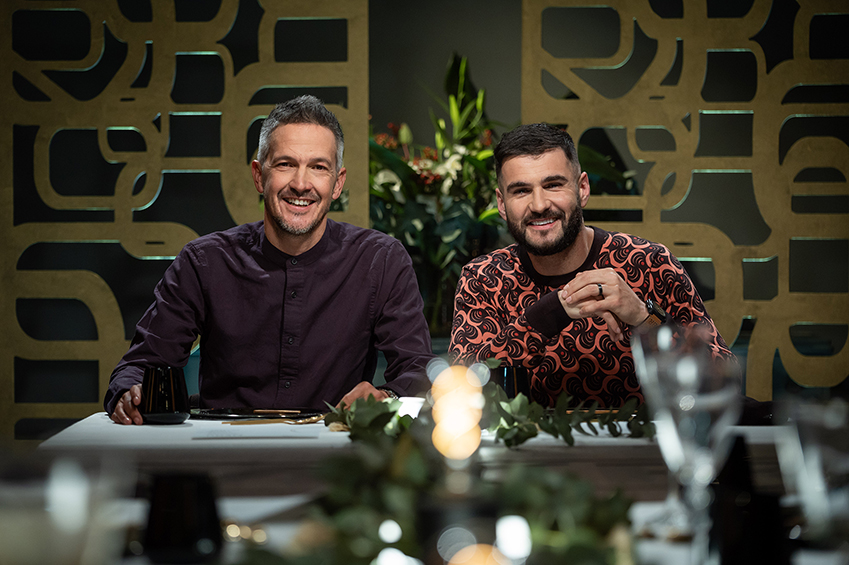 Nevi loved the coconut ice cream version, but not the red bean daifuku one, with Karen also pleasantly surprised by how much coconut flavour they’d packed into it. Brett said he wasn’t a ‘pudding person’, but that if he were to be presented with this dish every night, he would be.

When it came to scoring Nevi & Craig gave them a 6 despite declaring their dipping sauce as ‘amazing’; Karen & Tenille gave them a 5 – presumably because Karen didn’t appreciate the main as much as the judges had; Palesa & Palesa said the starter had taken them all the way to Thailand before scoring them a 7 and Brett & Aidan gave them an 8, with the former describing the meal as ‘delicious and delightful’. When their score of 26/40 was revealed, Retha was taken aback, in light of how the judges had praised them for ‘nailing’ the flavour. 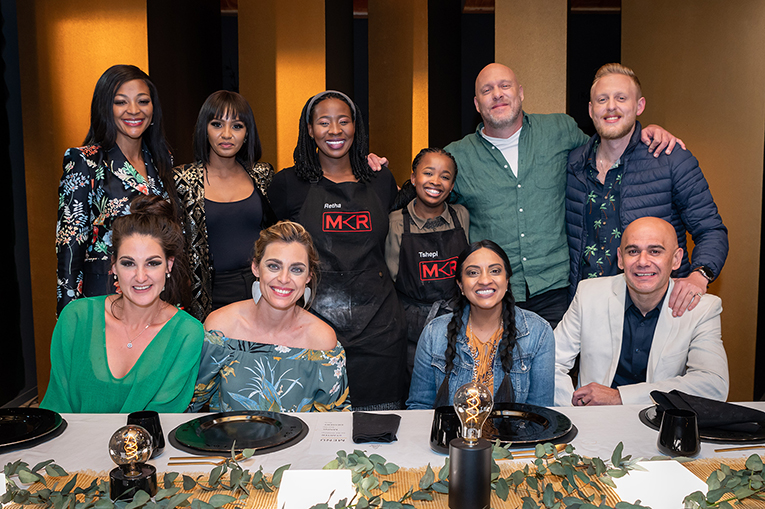 The judges were more free with their scores, with David scoring their starter, main and dessert 7, 8 and 6, respectively, praising the quality of the broth in the main course as proof that they were serious cooks. J’Something awarding them 8, 8 and 7 – declaring that their main course could have been a 10 with a few technical tweaks.

The tears flowed for Retha again as they took the top spot on the leaderboard, saying that the whole experience had validated so much for her.

With just two teams left to cook, next week will see father & son team Brett & Aidan work their magic in the MKRSA kitchen, promising that “bald & beautiful will make a wonderful team”.