Why Everyone Should Visit Keukenhof, Holland’s Tulip Paradise

I have always had a massive obsession with color. When I was a kid, I would pick books to read at the library based on how colorful the cover was. A box of rainbow crayons was my jam (but wasn’t it everyone’s?). As a designer and photographer, my work is distinctly vibrant and bright. I’ve tried time and time again to explore black and white as a creative avenue but each time I fail miserably. I just adore color in all of its happy, cheerful glory. Which is why when I wrapped up a recent visit to Europe, I immediately knew that I had to write about the most vibrant, prismatic wonderland I have ever had the pleasure to visit: Holland’s Keukenhof Garden.

It’s no secret that the Netherlands is known for tulips; they are the biggest exporter of flowers in the world. Yet despite all of my meticulous research, I did not figure out that Keukenhof existed until after I had already booked my trip. It is open only from mid-March through mid-May, so when I had the revelation that the trip was going to fall during that short window of time, I went from excited to ecstatic. A 79-acre garden, bursting to the brim with seven million kaleidoscopic, rainbow tulips? After pouring over Instagram photos I was convinced that Keukenhof would be a pretty accurate representation of my inner child’s Lisa Frank-addled fantasies.

I was not mistaken. 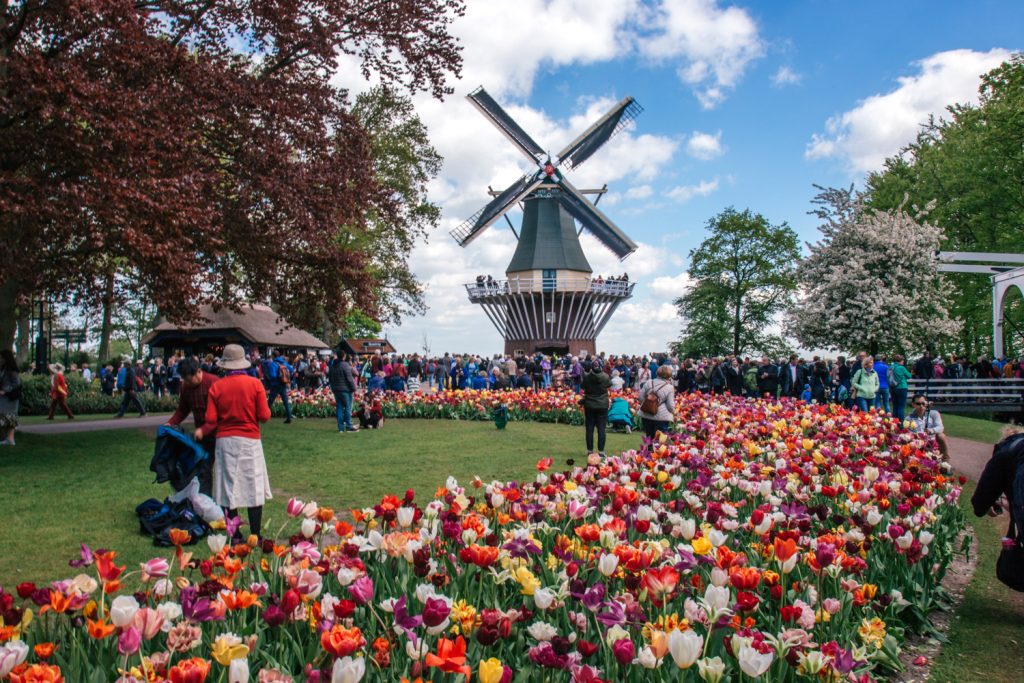 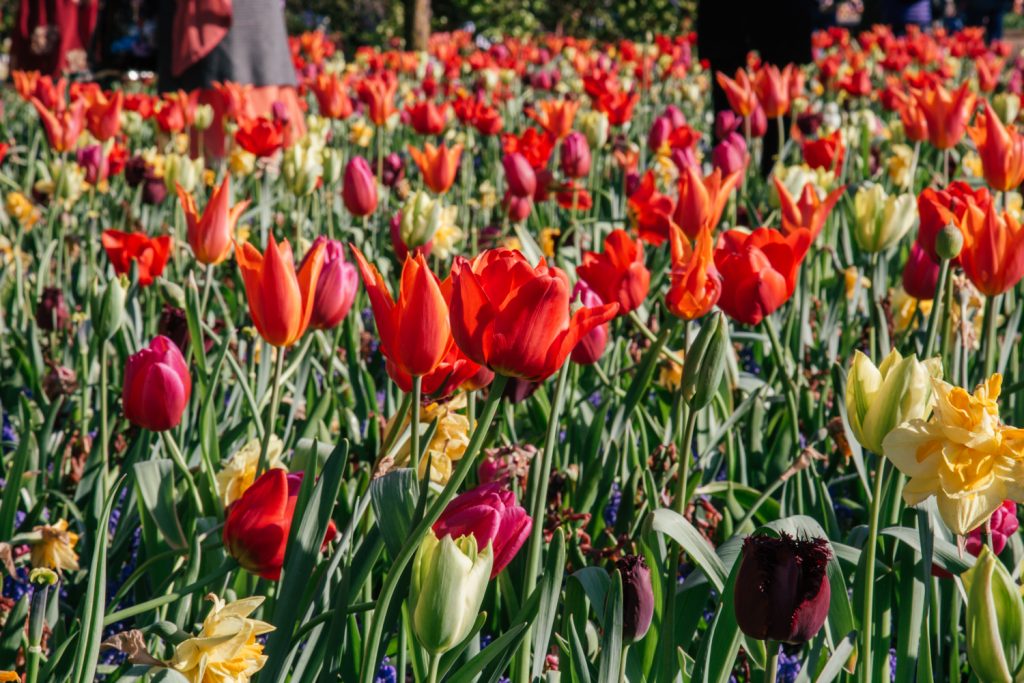 I learned more about tulips than I ever needed to know, though I can’t say it wasn’t interesting. They were imported into the Netherlands from the Ottoman Empire in the 16th century, and became so popular for a time that bulbs were stolen from gardens and sold for exorbitant prices. The Dutch have been trying to cultivate a black tulip for centuries and finally managed to get close in 1986 – technically the color is a very, very dark purple. Tulips are taken very seriously in the Netherlands, so even for those who aren’t particularly crazy about flowers, a visit to Keukenhof is a neat way to explore Dutch culture.

Though it will be teeming with flower fanatics at any time of day, early risers can nab some gorgeous photographic light and enjoy the garden before it reaches peak visitor levels at noon. There are indoor exhibits that showcase a huge variety of other beautifully curated foliage as well. My husband and I spent about four hours leisurely wandering around, which mostly consisted of forcing him to snap photos of me with every bloom in sight. We had time to kill so our pace was relaxed, but the gardens can be observed sufficiently in about half the time. Had it not been so windy, we would have rented bikes and ridden through the expanse of tulip farms just outside the grounds (which is a great way to get a tulip fix on a budget, but I still think Keukenhof is more than worth the entrance fee).

Keukenhof is easily accessible from Amsterdam. The easiest solution is to drive, but there are plenty of other options available via public transport. Express Bus 858 from Schipol Airport is ideal for anyone with a quick stopover in the country, shuttling passengers to the entrance in about 30 minutes. Express buses also run from Leiden (854) and Haarlem (50). These three options come with the option to purchase a “combi ticket” from their respective stations, which includes entrance to the garden and the return trip. Be aware that these buses can become quite crowded, especially at peak visiting times. Those departing from Amsterdam can take a train to Schipol and transfer to the express bus, but many tour companies offer direct transport that include the previously mentioned perks and depart directly from the heart of Amsterdam. 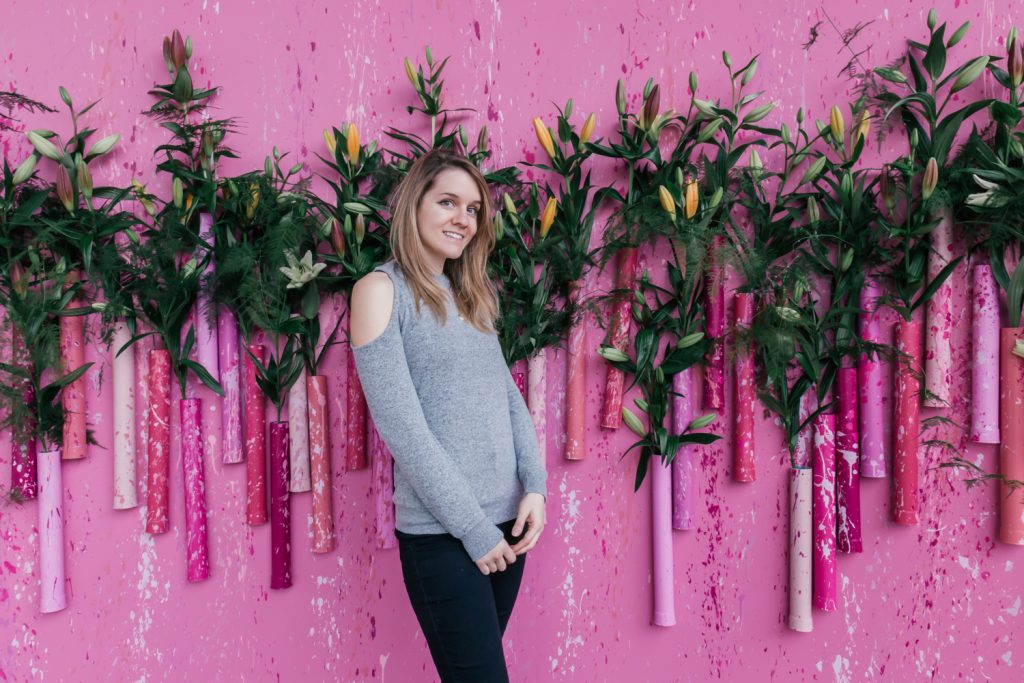 For those who want to literally frolick in the flowers, there is no going wrong with a visit to Keukenhof. The sheer number of tulips and the painstakingly maintained landscaping is a marvel in itself – how nothing ends up trampled is a mystery to me. The garden is presently closed for the season, but that means there is plenty of time to plan a trip for next Spring!