Imagine you’re a thirty-something Joburger and you live and work with your hapless sibling. This is quite the interesting dynamic. Couple this with a secret mission that both your careers depend on and you’re living the lives of Thys & Trix – SA’s newest comedy duo. It’s a fish-out-of-water meets buddy cop film with loads of twists, turns, laughs and a good helping of heart thrown in for good measure.

Director Quentin C. Krog, best known for his films Ballade vir ‘n Enkeling and Vir die Voels, makes his first foray into Afrikaans comedy with good effect. You’d expect a film in this genre to be filled with slapstick humour but thankfully the gags are smart and the story has a good degree of substance. 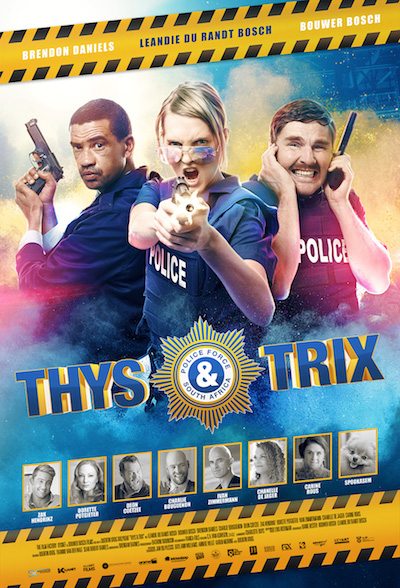 Thys (Bouwer Bosch) and Trix (Leandie du Randt-Bosch) need to not only work successfully together but pretend to be a married couple at the same time. This is made all the more difficult as they are thrown into a new city and a new world, going undercover to expose a drug syndicate in an upmarket Mossel Bay golf estate. The community they infiltrate is filled with colourful characters. Most notably are Stefan (Charlie Bouguenon) and Gerhard (Deon Coetzee) whose performances are side-splitting as they transition effortlessly from a stereotypically camp gay couple to a pair of ruthless drug smugglers.

Thys & Trix are not without help on their mission. Detective Solomons, played by Brendon Daniels, keeps an eye on things by posing as their butler. His performance is a great contrast to the relationship between Thys and Trix and works well in heightening the comedic drama as they attempt to blend into their new community.

As you can expect, Thys and Trix end up in a variety of compromising positions. With their unmistakeable chemistry, Leandie and Bouwer’s interactions in these scenes will have you laughing, cringing and perhaps even choking up a little.

Thys & Trix is a fresh take on Afrikaans comedy and definitely delivers more than you would expect from this genre. If you’re looking for a feelgood night out, Thys & Trix will most certainly do the trick!