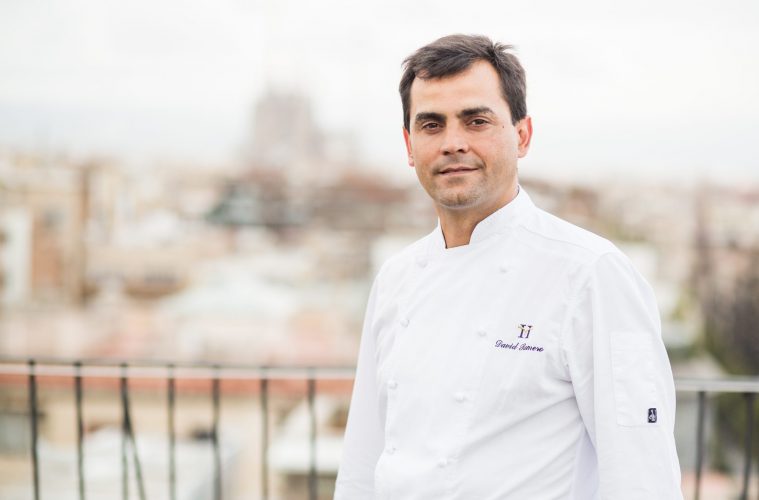 Homage to Catalonia: An Interview with Chef David Romero

The Majestic Hotel & Spa Barcelona celebrates 100 years of history (1918-2018), and what better way to celebrate than with the inauguration of the new Restaurante SOLC.  Influenced by Michelin Star Chef, Nandu Jubany, it’s Executive Chef David Romero however, who takes centre stage. We meet with the mastermind behind it all.

Stepping into the glowing foyer of the Majestic Hotel is an experience in itself, with towering white pillar columns, vintage chandeliers and soft golden lighting framing every angle. Follow the hall, ramble up the stairs, and located in the former space of Fermí Puig’s Michelin Star Drolma, you’ll find Barcelona’s latest eatery, the cozy Restaurant SOLC.

I had dined once before at the Majestic, for a press dinner in honour of the Joan Miró Foundation, presided over by Michelin star chef and the hotel’s gastronomic advisor, Nandu Jubany. It was a luxurious feast and one not to forget. My second visit was for SOLC, and I was surprised to be greeted by an understated contrast, a natural and unpretentious menu emphasising a fresh farm-to-table concept, a relative first for Barcelona’s cluttered foodie scene, and especially not what you would expect to find nestled inside a luxury hotel.

Looking closely at the menu, I could see grains of Jubany’s influence scattered throughout the dishes. However, it was under the craftsmanship of Romero, that this tribute to fresh Catalan cooking came to life. Think market fish with barley and cava sauce, lemon thyme gnocchi, and honeyed eggplant with cottage cheese aioli, and you’ll have an idea of some of the gourmet treats up for grabs.

We met with Chef extraordinaire David to discover the secrets behind one of the freshest eateries you’ll find in the Catalan Capital, alongside the hotel’s exclusive centennial celebratory menu. 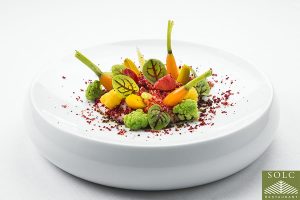 SOLC’S menu is not typical, it’s not created within the confines of the restaurant’s kitchen but instead, at the hotel’s farm, just steps away from the Mediterranean coast. How does this collaboration process between the farmers and chefs work?

The menu of Restaurant SOLC is designed and based on the produce we have available at that time at the kitchen’s farm. Both our Tasting Menu and ‘Menu Del Dia’ change very often depending on the fresh ingredients we have available. I’m in contact with the farmer every day, with visits to the farm once a week. However, every single day one of my team heads out and brings fresh produce straight back to SOLC’s kitchen.

With this concept, you’ve skipped all the usual middlemen to bring the ingredients fresh from farm to table. How did this process and concept inspire the menu?

Well, we take most of the vegetables that we prepare, from our kitchen garden in Argentona, in the Maresme region.  The ones we don’t home-grow are always bought fresh from other local farmers. Fresh meat and fresh fish are always gotten from the local market.

The menu adapts to the produces of the region and the season. It’s not about the dish that we want to cook today, it’s about what we can do with the produce that we have today.

Restaurant SOLC is located in one of Barcelona’s most luxurious hotels and has the capacity to be a very upmarket, luxury restaurant. What made you decide to go the opposite route and provide simple, unpretentious fare?

Well, we don’t think that it’s completely the opposite way. We think that with simple, healthy, seasonal produce you can create a better cuisine with more special flavors, for us, that is luxurious. The produce is the star of the dish and If the ingredients are better, the cuisine is better. That’s luxury.

What is the standout dish from the Restaurant SOLC menu? What would you recommend for someone who wants a real taste of Barcelona?

One of our client’s favorites dishes, is the daily kitchen garden, a colorful and flavorsome selection of vegetables, taken every morning from Argentona. These change a little bit daily and a lot every season.

There are so many other details that will give you that proper Barcelona feeling: our olive oil made specifically for us near the city, in Catalonia, the traditional bread made with natural yeast dough from Forn de Sant Josep, the Barceloneta prawn croquette, and of course AA Cau D’en Genís Cuvée Majestic, a wine made from the Pansa Blanca grape variety and specifically for Majestic. using organic viticulture methods at the Alta Alella winery in Maresme. Our very own sommelier, Pablo Fernández Rodríguez, was involved in the process of making this wine

Nandu Jubany is the gastronomic advisor for the hotel’s restaurants. Did he have any input on Restaurant SOLC’s new restaurant concept and menu?

Of course, Nandu Jubany is the advisor of all of the hotel’s gastronomy. From the beginning, he was involved in the concept as well as the restaurant’s menu. However, in this case, the menu can change so often depending on the available produce, that many dishes and decisions are made on the spot by myself as the Executive Chef of the hotel and Luis Llamas, as the Chef of Restaurant SOLC.

The Majestic’s have introduced a Centenary menu to celebrate their 100th year anniversary. What made you select these particular ingredients and dishes, and how do they celebrate the Majestic?

I designed the Centenary menu from the old menus of banquets and celebrations that had taken place at the Majestic at the beginning of last century. It was a cuisine under the influence of the French. I had been researching the recipes of the classic Chefs of that time and trying to recreate them in a lighter way. The Centenary menu is a little gastronomical trip to the past century.

You can get a taste of Romero’s ode to Catalonia at SOLC with their lunchtime ‘menu del dia’ and evening Tasting Menu.