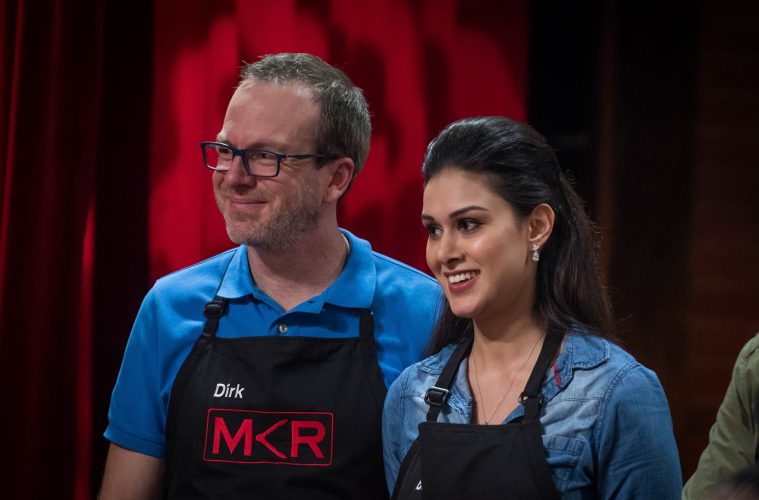 Dirk and Bahia. The first to leave My Kitchen Rules SA

The ultimate exhilaration for any foodie is to be able to cook and share your culinary skills with those you love and admire.

For a bunch of My Kitchen Rules SA contestants, this was taken to an unimaginable level over the last ten weeks. They have been lucky enough to cook for and be judged by two of South Africa’s foremost chefs David Higgs and J’Something.

Week after week of action packed Instant Restaurants led to the first Sudden Death cook-off that saw engaged couple Dirk and Bahia leave the competition. We sat down with Dirk and Bahia to find out more about their MKRSA journey.

The Interview: Dirk and Bahia

What made you both decide to take part in My Kitchen Rules SA?

Bahia: We both love food and this is a great opportunity to live out a dream that’s normally not that easy to pursue when you are working professionals. I’m an attorney and Dirk is a business man. You work your whole life in your profession but you have this dream that maybe you’ll find a way to showcase your love for food and that you can actually cook.

Dirk: Bahia was the force behind me taking part. When I got into it and started helping her make food, I started enjoying it. I’m one of those people that as soon as I try to do something, I try to do it well.

What are your real highlights of your MKRSA journey?

Bahia: The people we met. The group of contestants were really diverse. Different cultures and people from all different types of backgrounds. Putting such a mixed bunch of people together is heart warming and creates a truly South African story. We all came together and have made friends for life.

Dirk: The highlight for me was when we cooked at our house and the judges really liked our food. We got the chance to cook for one of our favourite chefs, David Higgs. To have him taste our food and give us good reviews makes you feel like wow maybe we can really cook.

Did everyone on this season of My Kitchen Rules SA get along?

Bahia: Everyone did get along. We’ve obviously all got quite different personalities and the competition sometimes involved having some tact but in general we are all quite good friends.

Tell us a bit about the rivalry between the teams.

Bahia: It’s a game of strategy in the initial rounds so there are obviously people who are trying to sway everyone else’s scoring. For Dirk and I we felt that going into this, integrity is more important to us. We wanted to be really honest about how we felt about the food. We reviewed it as we would if we went to a restaurant and reviewed on restaurant standard because it is a cooking competition. There isn’t always consensus around the table but it’s difficult to tell if this is part of someone’s strategy.

MKRSA is as much about relationships as it is about cooking. Who were you both close to on the show?

Bahia: You naturally form the most connections with your group because you’ve spent five nights with them. Before you meet the other contestants, they are all you know. So for us it would be Maritsa and Maradine. We love their food philosophy and how kind they are. There’s a pleasant kindness to them that everyone felt and after the show has ended, they are still the same people. 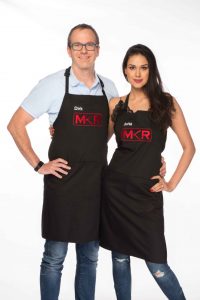 How has your relationship changed or evolved through your time on the show?

Bahia: Well if you want to see someone’s marriage potential, cook a meal with them first. Being on the show was more my doing than Dirk’s but when you start cooking together you both want to pull your weight. Cooking together brings you closer because in this there’s nobody else that can be there for you besides each other. It’s a highly pressured situation so it really tests your patience and you come out shining from it. The experience makes you stronger because you’ve been through it together and it’s memories you’ve created for the rest of your lives.

Tell us about a moment that your relationship was really tested by My Kitchen Rules SA.

Bahia: When Dirk’s samoosa dough didn’t work out on sudden death. We handled pressure very well though throughout the competition but it’s an unnatural environment with the lights and everything that you’re not used to. The time constraints were a test for us. We would have a plan which usually works when you’re at home but in this environment suddenly something you’ve done a hundred times doesn’t work. The stress of elimination and your dream are on the line. That was the most testing for us. We felt flustered in that moment.

What have you learned about each other as people and as cooks?

Bahia: I think that Dirk can be taught to be a very good chef, better than he thinks he is. Something which surprised our fellow contestants as well. If you take him slowly through tasks he can really be in his element because he’s a perfectionist. He makes dishes his own and when he made the curry, it was one of the highest scored dishes in the competition.

Dirk: I’ve always known Bahia as a really good cook so for me I really wished she would win. I really believed she could have won. I already knew she’s a good cook. She’s a wonderful partner to cook with.

What was your favourite challenge and why?

Bahia: I really enjoyed the Stella Artois People’s Choice challenge. That was fun. We were cooking outside in coal-fired ovens for an amazing crowd of people. If we could redo that challenge it would be really cool.


Which was your best dish to prepare?

Bahia: The curry that got the highest score. The starter did well too but the curry got the overall highest score from the judges. So we would have to highlight that one because we really made it our own. The plating was done in a fine dining way like Indian dishes aren’t normally done.

Which of your fellow contestants dishes has stayed in your memory and why?

Bahia: Maritsa and Maradine’s chocolate mousse. Maj also did an amazing deboned chicken stuffed with haloumi and spinach. It had such great flavours.

Has your food journey changed or evolved since MKRSA?

Bahia: I think I’m a better cook after the competition. I’ve challenged myself in different ways. I’ve looked back on the challenges and thought how I could redo them better. It’s definitely improved the way I look at my cooking.

What are your food plans for the future?

Bahia: I always have the hope that I can bring out my inner Nigella and have my own cooking show because I feel in my element in that environment. I think it’s the perfect platform for me to showcase my food dreams. I love making food videos for Instagram.

Dirk: I’ll make the curry one last time and go back to braaiing and supporting Bahia.

Catch more episodes of the My Kitchen Rules SA on Sundays at 18:00.

Next Up: the teams will be doing their all to impress the South African Culinary Olympic team.