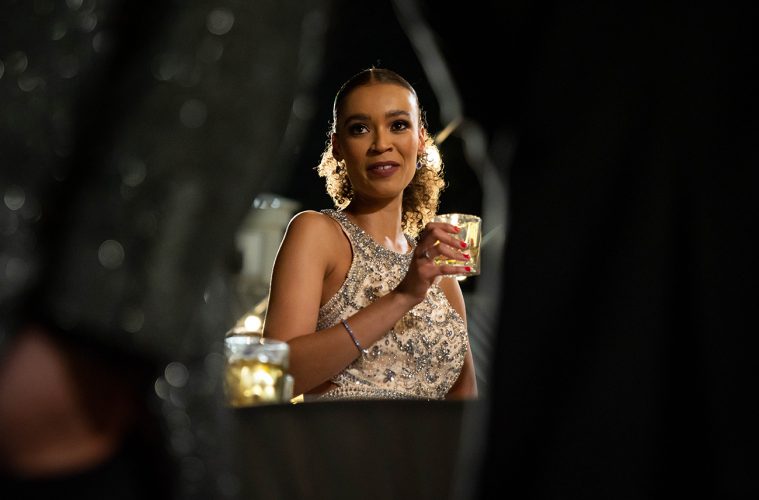 There were group dates, one-on-one dates and big confessions, but Bradley and Marc leave The Bachelorette SA

Last night (Thursday, 25 February, at 19:30), M-Net’s The Bachelorette South Africa was another eventful episode. The episode started at a flying pace, with Qiniso surprising everyone in the mansion by inviting Craig for a little tea party to have a catch-up with him.

Once again, the men in the mansion were surprised and put on high alert. There was all to play for in an episode that was filled with secrets, regrets, and big confessions. 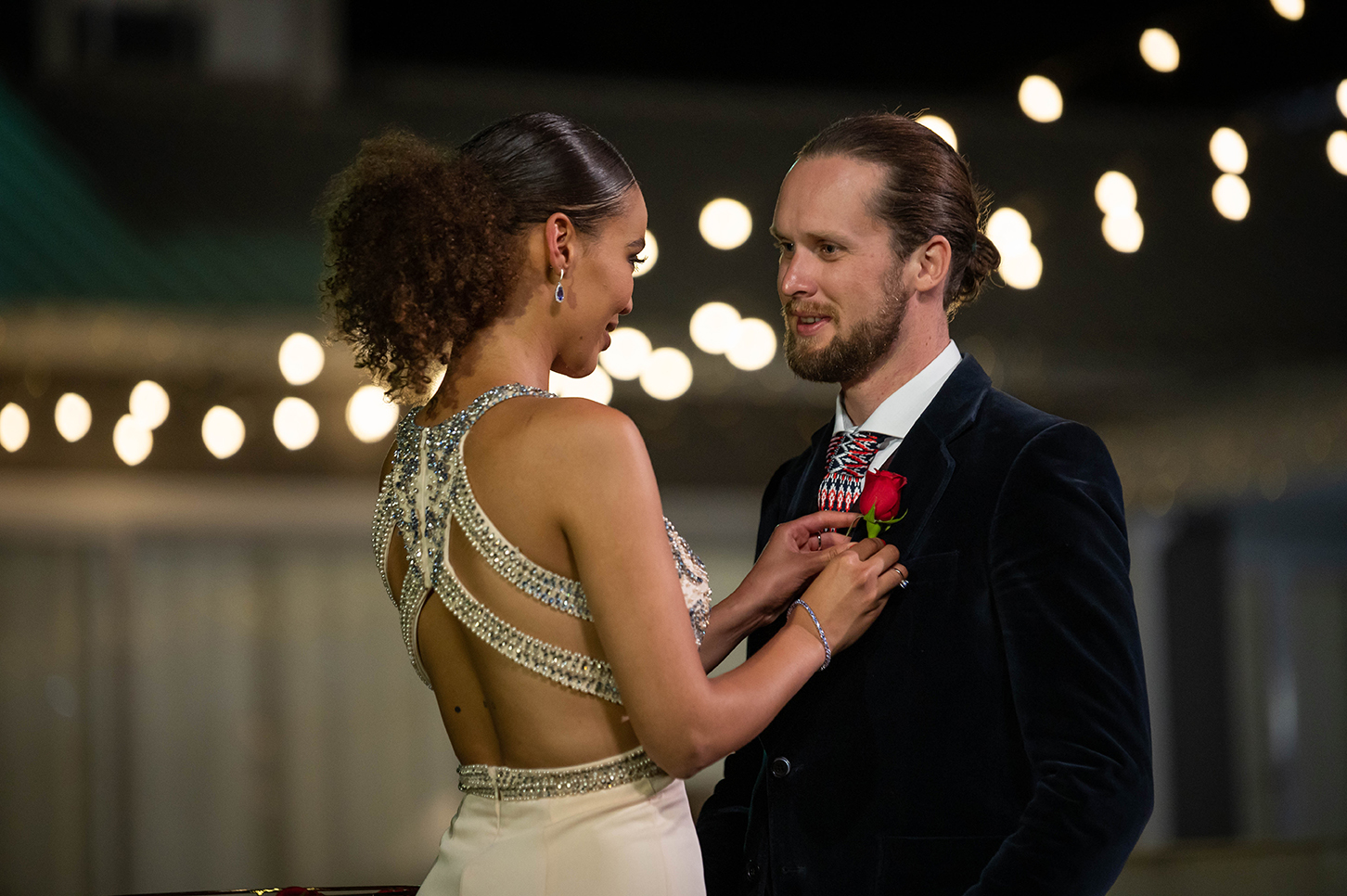 Brad, Vuyani, Aviwe, Gareth, Marc, Kyran, Justin, and Dylan were all called up to go on a group date with Q, leaving the others, especially Ruan, feeling a bit left out.

The date comprised of a speed date, which left some of the men very tongue-tied, followed by an auction held by Jason himself and sponsored by Lotto Star. The men had to bid for an attribute that makes for a great relationship, and Kyran won some one-on-one time with South Africa’s bachelorette.

Kryan bid on honesty and trust, and he took that theme into the date, telling Qiniso that he had a twelve-year-old son. But even after a great one-on-one, Kyran failed to get a rose from Qiniso.

Aviwe generously helped Kyran in his bid by financially backing him. This is a favour that Aviwe called upon very early and made Kyran his butler. And all in good fun and good spirits, the nature conservationist, being a man of his word, fully embodied the role and waited on Aviwe and Marc. 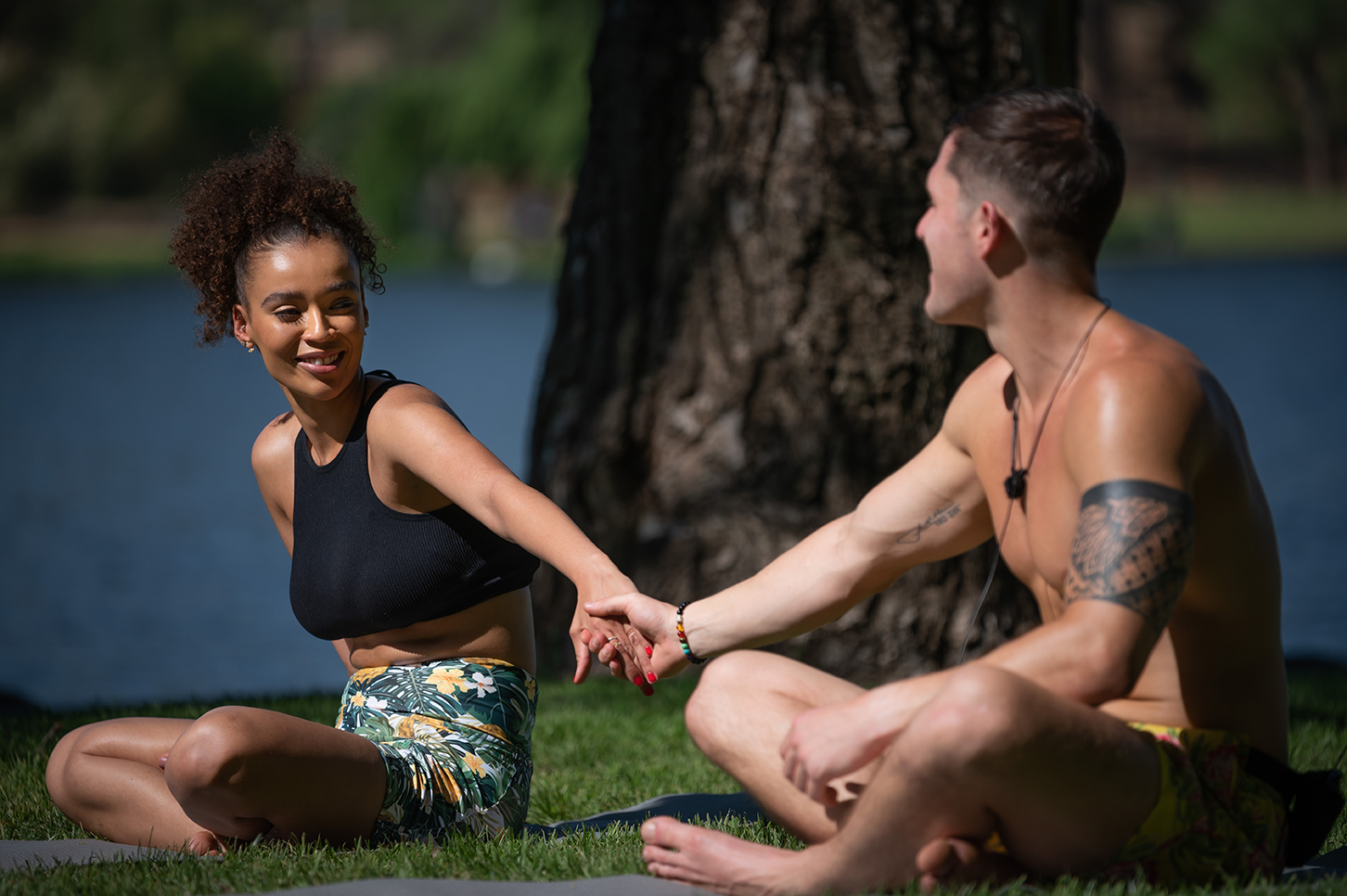 Keelan picked up the first one-on-one date of the season and went on a yoga date with Qinso. After a relaxing session, the two had breakfast together where things became very deep and very personal. Keelan made himself vulnerable and opened up about his previous relationship.

He emotionally confessed to having cheated on his ex to get out of their relationship. A risky move, but his honesty won over Qiniso and built on their trust and intimacy. This earned Keelan the first kiss and a rose. 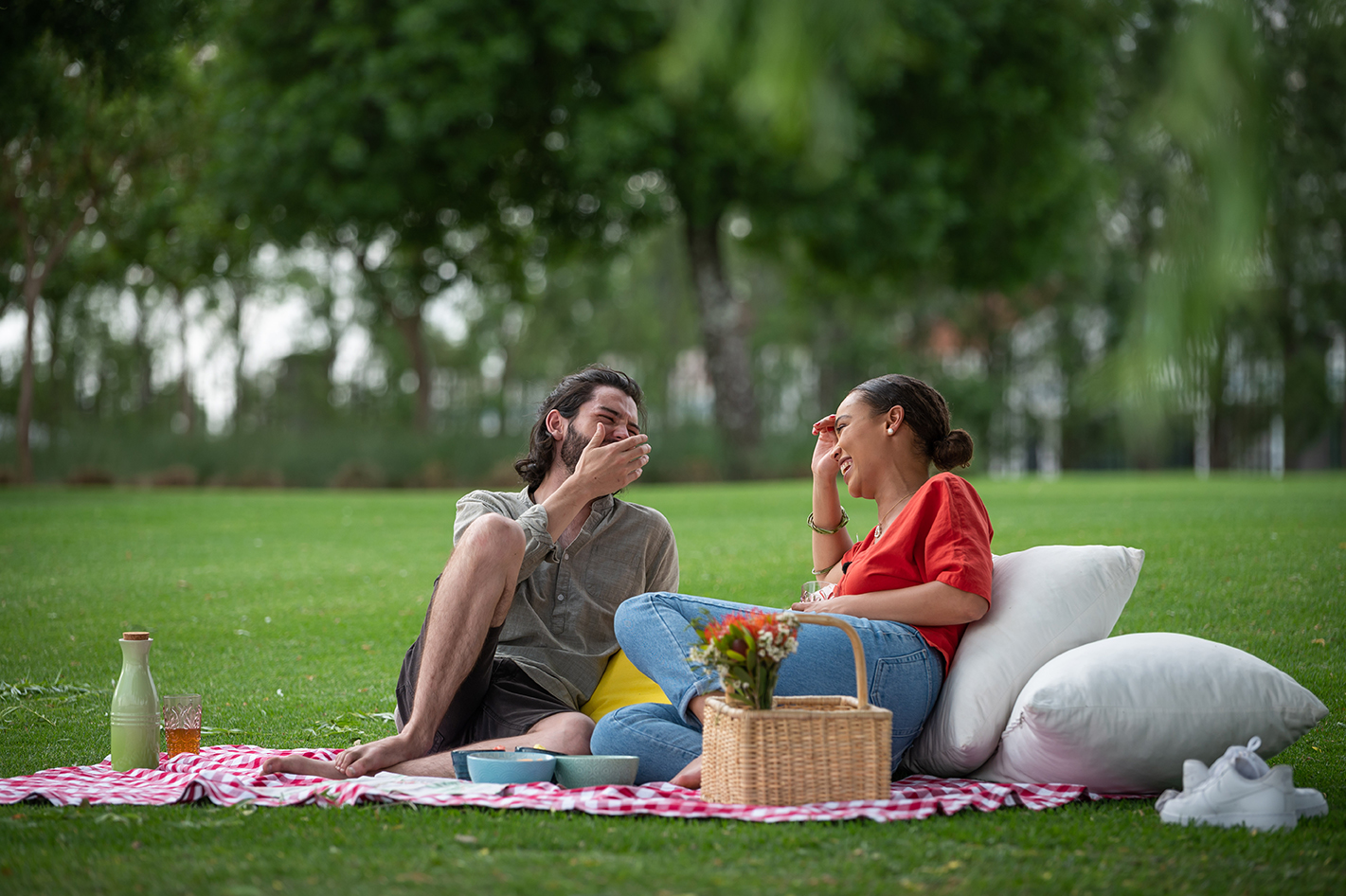 After winning his first impression rose, Ruan felt that he was not getting enough time with Qinso, and to his surprise, she thought the same thing and whisked him away on a spontaneous picnic.

The two seemed very at ease and had a very fun and relaxing time. “Yes, serious conversations are important to have, BUT, I feel like the way in which we going off into little tangents, and just really enjoying each other’s company and enjoying the moment together is just as valuable,” – said Qiniso.

Being in sight of the guys, some of them felt a tad jealous of the experience and were worried he would receive a rose.

No room for BS at the Cocktail Party 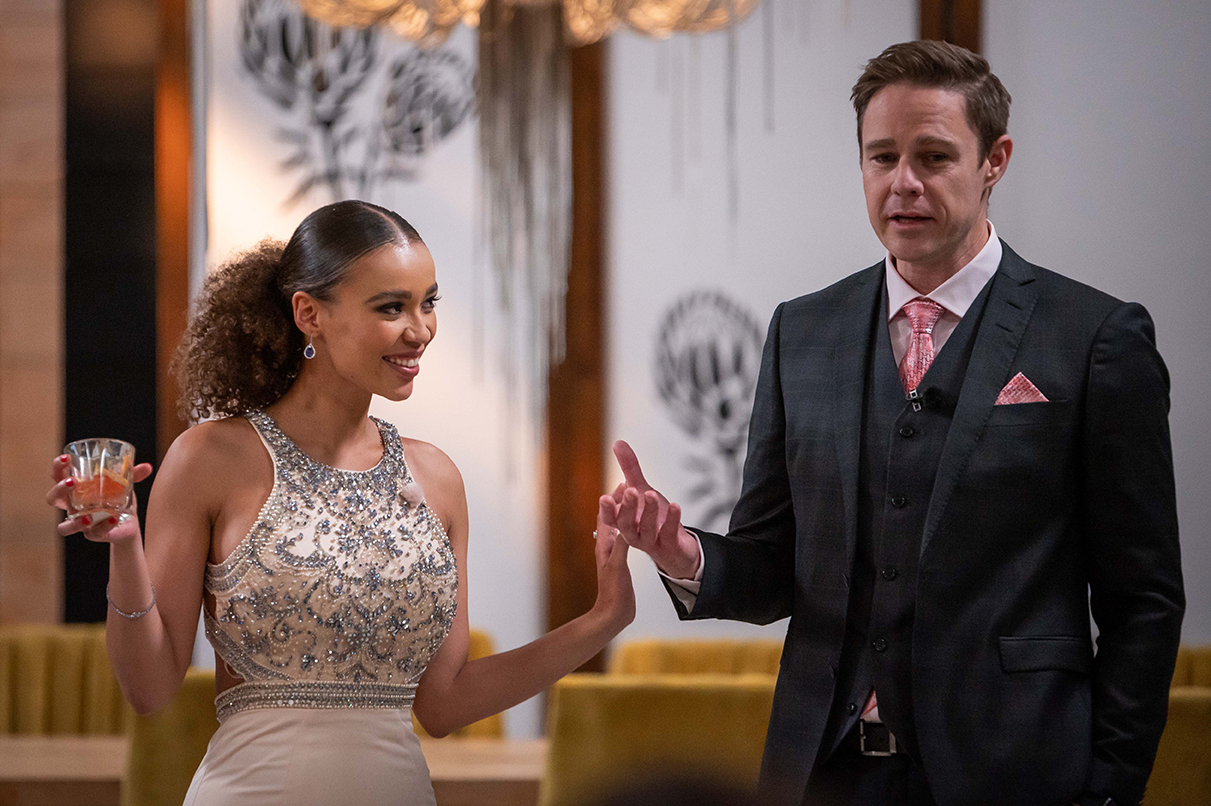 The party got off to a flying start, with Justin alerting everyone to the fact that females tend to see through men’s BS. This sparked an impromptu grilling of the guys from Q about what exactly is their BS. This left some of them opening up and others scrambling, with Brad opening up about something that might have been a bit too personal for the setting.

Later Qiniso stole a kiss with Cameron, asserting herself as a woman that takes charge and makes her own decisions. Needless to say, this left Cameron on cloud nine and the other men feeling very jealous and awkward. 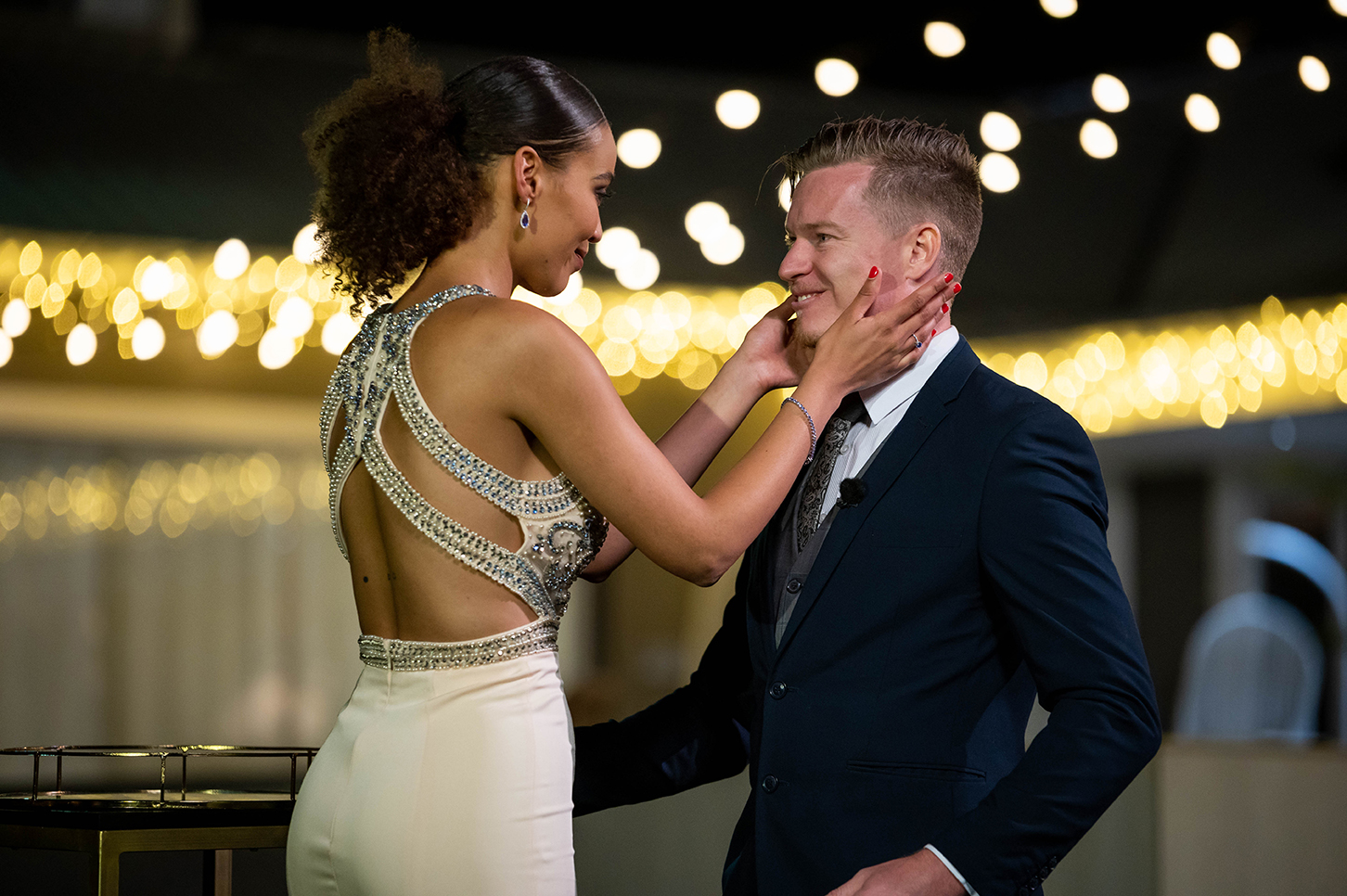 The rose ceremony was another tense affair, leaving Peter, Aviwe, Brad, and Marc all sweating. This time two of the men went home.

Marc – the father of two, business developer, brand strategist, and Qiniso’s silver fox – was not 100% invested, and Qiniso said that she doesn’t need 50/50. Marc was sent home, but he wished her all the best.

Bradley, the man from the banking and insurance industry, who rapped to Qiniso on the red carpet, opened up about his father on the night. He ended up not being chosen by Qniso and had to leave the mansion.