You would’ve learnt about the beautiful and insanely talented Jade Aux from my last piece on the Durban bred musician reviewing the launch of her first ever EP Petrichor. I was lucky enough to dive deep with this artist in this personal interview, gaining insights into her life, sources of inspiration, and musical processes.

Let’s start by getting to know you a little better! Please introduce yourself to our readers so that they have a better idea of who you are and what your background is like.

Well my name’s Jade Aucamp – no one ever pronounces my surname correctly though, so I go by Jade Aux. I was born in Johannesburg and moved to KZN on the South Coast when I was eight, where I grew up until we moved to the North Coast when I was fourteen. I’m currently living in Durban.

I matriculated in 2015, and now I’m studying a BA Graphic Design degree at Vega. I’m also doing freelance social media management and freelance design work, and of course, I’m independently making music as much as possible. 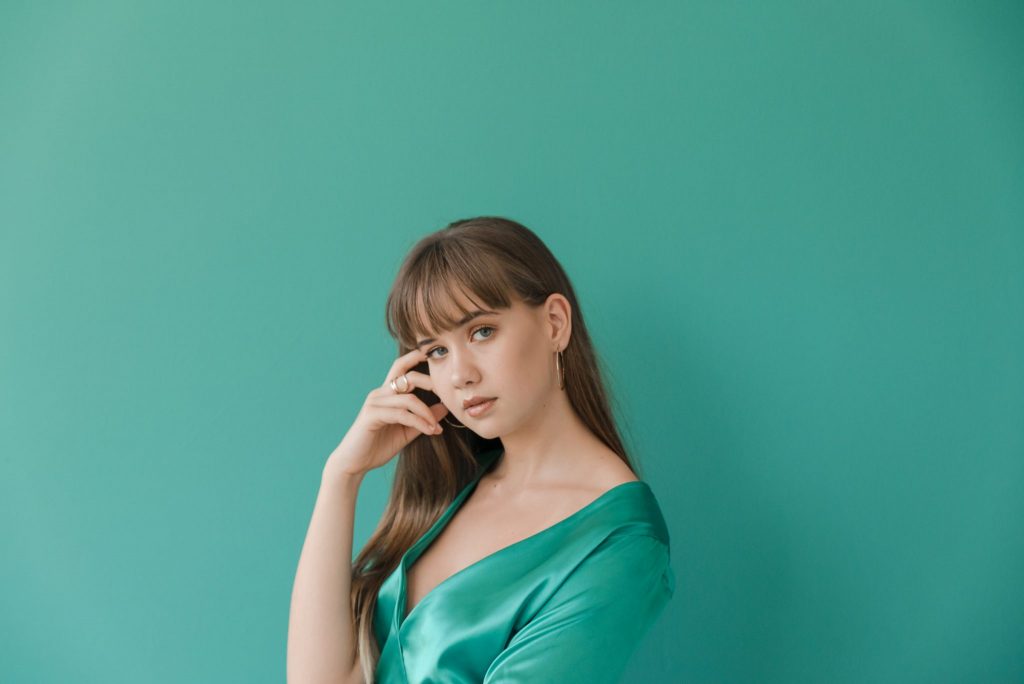 When did you start playing music and why were you drawn to it?

I’ve always been a musical kid; my parents have videos of me singing into a plastic karaoke machine on a camping trip when I was just three. The oldest memory that I have of participating with music is when I was about nine, I would sit in my room and sing along to the lyrics printed inside the CD’s booklet of Vanessa Hudgens’ “V” album, completely in my own world. After that I learnt to play guitar when I was ten, and wrote my first full song at eleven. My friends laughed at me when I showed them the lyrics because I compared myself to a snail.

Is your family musical?

Yea, my mom was the one who taught me the basics of guitar, and she sings as well. My younger sister has a natural gift with music production and her pipes are very impressive. I think my dad played saxophone at one time as well, but his special talent is “purposefully” tapping off beat, haha.

Who are your musical influences/heroes and why do you admire them?

This is a tough one, because there are so many artists that influence me in little different ways, but I’d say Izzy Bizu and Maggie Rogers influence me a lot with their vocal styles. Izzy’s falsettos (the really high ones) are a dream and she inspired me to be more confident in growing my own.

Ben Howard is unquestionably my musical hero. Besides being an absolute legend in his song writing and musicianship, he got me through my parents’ divorce.

What are your fondest musical memories? Any ‘singing-into-your-hairbrush’ moments that bring a smile to your face?

During my pre-teen years, I’d pretend I was in studio recording my songs. I’d create the most intimate little set up in the corner of my room, with a lamp in front of my chair, my earphones attached to the radio (it was a fancy radio for 2006) and pretend the music I was listening to was my own, as I played guitar and sang along to it. That was the best. It was just me and the music and the dream of creating.

Also, when we still lived in Joburg, I would refuse to wake up for school unless my dad played Shania Twain in the morning – she was what I was singing into the plastic karaoke machine on those camping trips.

Which have been your favourite gigs to play and why?

My favourite so far is the first one that made me seriously nervous. It was at the Litchi Orchard in Ballito, March 2016, and it was the biggest one I had played yet. The most nerve-wracking part was that my set-list featured my own music for the first time, and I had convinced myself people would hate it. As I was being introduced, I remember having a ‘perspective moment’ and thinking to myself, “How are you going to feel when the show’s over? You’re gonna wish you played your heart out.”. Just like that the nerves became microscopic and it was the first time I’d genuinely had fun on stage.

(Spoiler alert: the original songs got more love than the covers and I learnt how amazing people are.)

Tell us a bit more about your journey recording Petrichor. When did you decide that you wanted to record an EP and what was this experience like for you?

I decided to start this whole adventure last year, standing in the corridor of my old house, on my way to a gig. I’d realized that I wanted to give people access to my songs beyond my gigs, so that they could listen to them in their own time and develop their own relationships with them; whether in the car or in the shower or while working or studying. Just after I’d made that decision, I met my now good friend, Daniel Basckin. We ended up working together on the project and he produced and mixed the whole EP for me.

At first, the experience was super exciting and kind of unreal. Throughout my musical life every time I’d written a piece, I had only ever thought of the songs being recorded ‘one day’, never imagining what the reality of it would feel like. So, the phase of dreaming and discussing with Dan was absolute magic.

Then, the pre-production phase came and it was during my final first year exams last year; what a mess. I prioritized the music over studying and managed to create all the demos, with guides and instrumentation, in the period of about a week. Throughout this phase, my younger sister was my lifeguard, and all the sounds I bubbled out were bounced off her for fine-tuning. She kept me sane, really.

I’m home sick for the actual studio sessions of the EP. We had so much fun and I learnt so much during those sessions about music and recording, but also a lot about myself. Dan helped me accept the fact that I have a Country Pop style – a story for another day.

Where did you draw your inspiration from for writing the songs for Petrichor?

When I write music it’s rarely a case of sit-down-and-create. I have a library of voice memos on my phone with random tunes and guitar licks and drumbeats that I’ll spontaneously record when they come to me. As soon as I have a concept for a song, that’s when the song writing goes down. I’ll sift through the memos, thread some together and then work off them.

In terms of each song’s concept, they were inspired by different parts of my own life. The concepts moved from being frustrated with relationships (This & Let Me Know), finding freedom in being vulnerable with myself (Eve), honouring my best friend (The Well) to dying inside for wanting to live a life of creativity at its fullest (Décor).

I know why you named your EP Petrichor but our readers probably didn’t even know what that word meant before our last article on the EP launch, so why Petrichor? 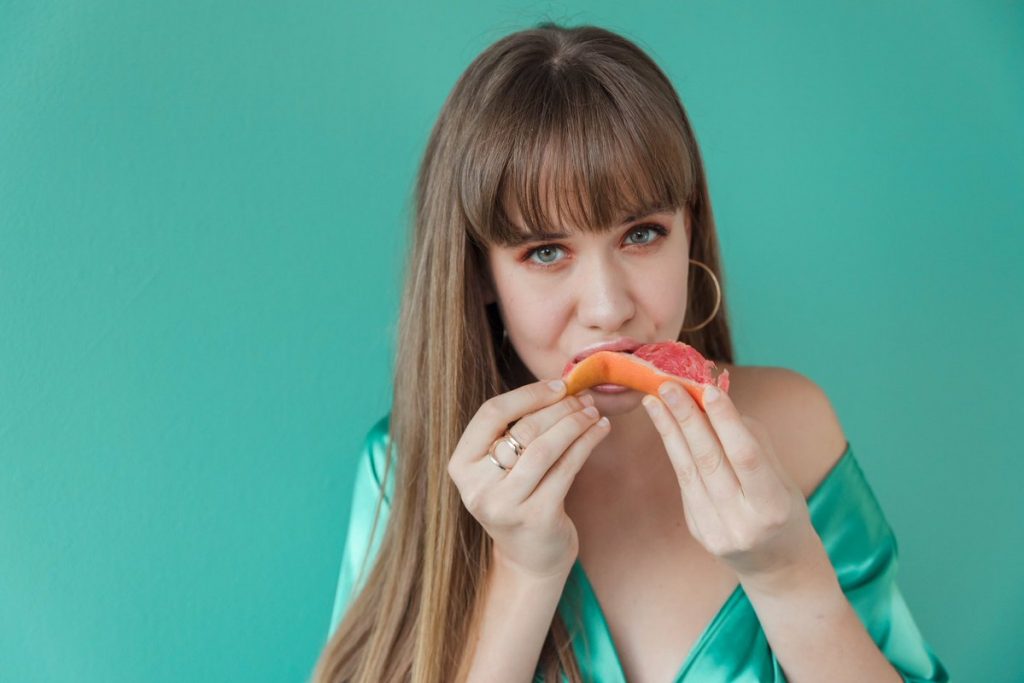 Honestly, I think I was just messing around when I first came up with the idea to name it that. But, when I was contemplating on whether to stick with it or not, it was confirmed three times, and my intuition was so strong I couldn’t ignore them: I was reminded that the first song I ever wrote was a song about the rain. The concept of finally satisfying the earth after being dry for so long is significant for this EP, because it’s the first time my musical ‘drought’ over the last ten years is quenched, too. And lastly, the time I was contemplating this decision, it had started raining, and the smell was undeniable.

Grapefruit has played a central role in the theme and branding of your EP, can you tell us more about that and why you chose this imagery/metaphor?

Ha, this is the best part about also being a graphic design student – I get to do all the branding and design exactly how I envision it. The grapefruit idea is centred on the single that I first released, This. The song speaks to my crush, asking him not to do certain things out of the risk that I might fall in love with him if he does. The thing is though, I wrote This in 2013, and since then there have been multiple crushes that the song has become about, which says something about the kind of guys I end up falling for. They’re the kind that doesn’t like me back. The grapefruit acts as a visual metaphor for the question that maybe I enjoy the bitterness of one-sided love, the same way I enjoy the bitterness of the fruit.

Is there anyone that you would like to make special mention of who helped make your dream of recording Petrichor a reality?

God. I couldn’t have done it on my own.

I know you’ve just released your first EP, which is a gigantic achievement, but what’s next for Jade Aux? Any side-line projects that you are currently working on or exciting opportunities on the cards for the future?

I’ve just recently met up with Daniel Dedekind, a local videographer and photographer, and we’re making some video content together that I’m really excited about. He understands that I’m not afraid to push creative boundaries, so it’s a super comfortable space with him. There is more, but I’m not sure if I can say just yet – you’ll have to keep an eye out *clumsily winks*.

To end off, let’s do a few speed questions, what’s the first thing that comes to mind when I say…

Best song ever: Bon Iver’s cover of ‘I Can’t Make You Love Me’ by Bonnie Raitt.

Dream gig: Me and my favourite female artists in a room playing each other’s songs.