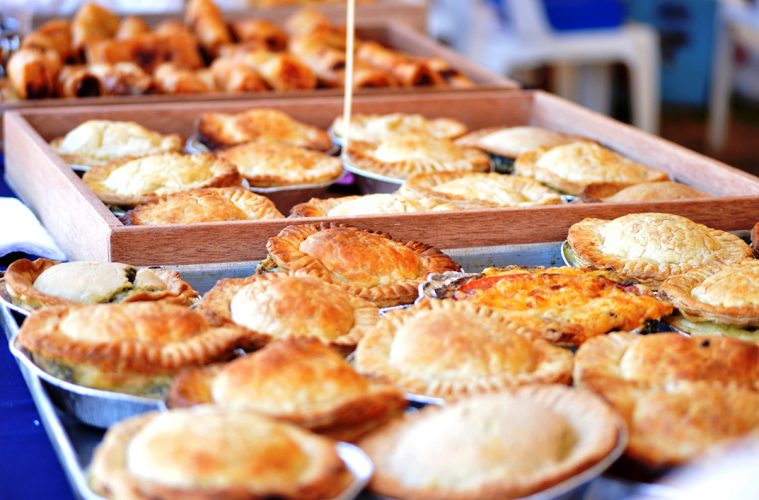 It’s As Easy as Pie!

National Pie Day – celebrated every year on January 23 – is a glorious opportunity to literally “eat humble pie”. Whether it’s a sweet pie, a fruit-filled pie or a savory meat-filled one, no pie should be left out during this annual foodie celebration that pays tribute to the perfect pastry!

National Pie Day was started in the mid ’70s by Charlie Papazian, a nuclear engineer from Colorado in the US, who had a penchant for pies. He decided to celebrate the pleasurable pastry with its own day and chose his birth date on which to do it!

But pies as we know them today are a fairly recent addition to a history that goes back as long as mankind has had dough to bake into a crust and various ingredients to stuff inside it. Historians trace the pie’s initial origins to the Greeks, who are thought to be the originators of the pastry shell which they made by combining water and flour. The wealthy Romans used many different kinds of meats, even mussels and other types of seafood, in their pies, while in medieval England, they were most often filled with beef, lamb, wild duck or pigeon and spiced with pepper, currants or dates.

Pies have always been a popular form of food because their crusty tops can act as a means to preserve food and were often used by travelers, explorers and adventurers who used dried fruit, cinnamon, pepper and nutmeg to season the meaty fillings. It was only later that pies began to have sweet fillings, and have since became more and more popular over the years. A cookbook from 1796 listed only three types of sweet pies, while one written in the late 1880s featured eight sweet pie varieties. By 1947 the Modern Encyclopedia of Cooking listed 65 different varieties and today there are literally hundreds of recipes for sweet pies.

Pies today are made with everything from apples to zucchinis. The most popular sweet ones amongst South Africans include the classic apple pie as well as lemon meringue pies and pecan pies, while savory favorites are pepper steak, chicken and mushroom and steak and kidney. Pies also come in the form of quiches, tarts, big pies or small pies and even dishes like a shepherd’s pie, a cottage pie or a favorite of the festive season – the mince pie! 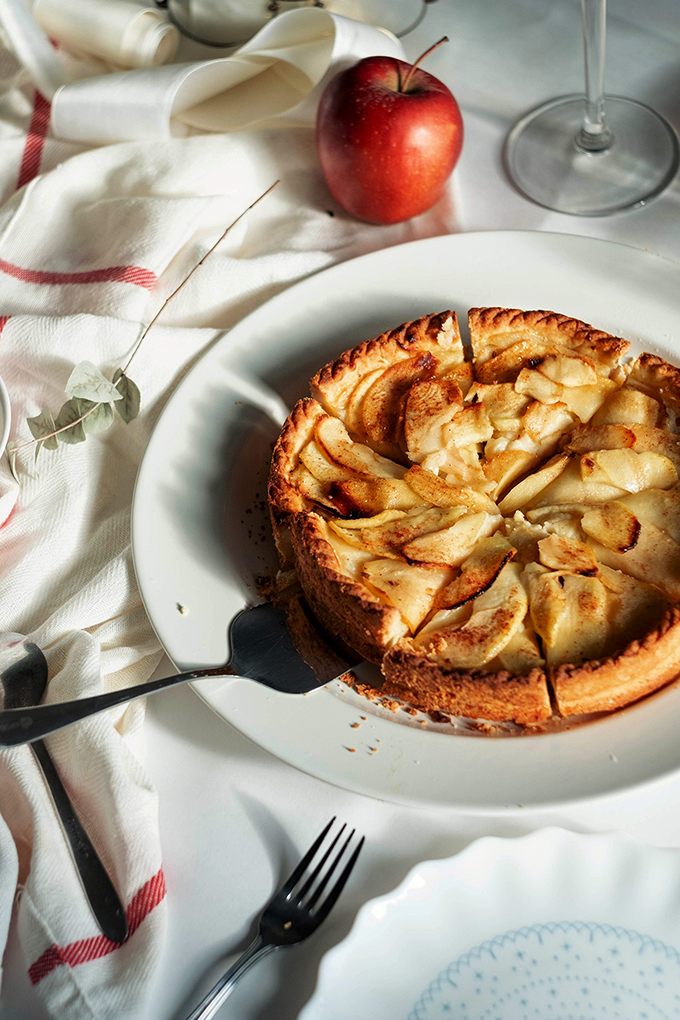 Pre-bought flaky pastry, or make your own (recipe below), chilled 7 to 8 Granny Smith apples

Peel then cut apples in half. Remove cores and slice apple halves into thin 6mm slices. Place apple slices into a large bowl. Scatter both sugars, salt and spices over the apples and toss them with your hands, coating the apple slices as much as possible. Set aside for 1 hour at room temperature.

Roll out half of pie dough on a lightly-floured work surface. To prevent the dough from sticking and to ensure uniform thickness, roll from the center of the dough outwards and keep lifting up and turning the dough a quarter turn as you roll. Check for the correct size by inverting the pie dish over the dough. The dough should be about 3cm to 5cm larger than the dish. Being careful not to stretch it, place the dough into the pie dish and trim overhanging dough to within 20mm of the edge of the dish. Refrigerate while you make the pie filling. Roll out the second half of dough to a similar size as before and transfer it to a large parchment-lined baking sheet. Keep this in the fridge until needed.

Toss cornstarch with the apples. Transfer the apples into the prepared bottom crust using your hands to really pack them down into the pie. Fill the pie until apples are at the same height as the edge of the pie crust. Pour the juices that have accumulated at the bottom of the bowl over the apples. About ½-¾ cup will suffice. Cut a tablespoon of butter into 8 or so small pieces and dot them over the pie.

For a double crust pie, place the second pie dough round over the filling or cut it into strips and lattice the top. If you are not adding a lattice crust but adding the top crust in one piece, use a sharp knife to cut a few slits in the top of the crust to allow steam to vent. Trim excess dough from the top crust or lattice strips and fold the overhang underneath itself, forming a thick rim. Press it together or crimp it with your fingers or use a fork. Whisk the egg with a tablespoon of water and use as an egg wash by lightly brushing the top crust. This adds shine and helps the crust brown.

Place the prepared pie onto a baking sheet lined with parchment paper and bake for about 75 minutes, turning a few times for even browning. Apple pie is done when the juices are bubbling through the vents of the top crust or lattice. Piercing the pie is also a nice indication of how soft the apples are. If they feel too crunchy, the pie needs more time.

Be sure to cool the pie, without slicing into it, for at least 1 hour, preferably longer. Keep in mind that the pie filling does not fully thicken until it is completely cooled. So, for the absolute best results, cool the pie to room temperature, and then place it into the refrigerator for an hour or two.

If you notice that the pie crust is browning too quickly, mould a large piece of foil over a bowl that’s been placed upside down to make a foil dome. Place the foil dome over the pie for the remaining bake time. This will slow the browning.

Add 1½ cups of flour as well as the salt and sugar to a food processor. Pulse 2 to 3 times until combined.

Scatter butter cubes over flour and process until a dough or paste begins to form, about 15 seconds. (There should be no uncoated flour).

Scrape bowl, redistribute the flour-butter mixture then add remaining 1 cup of flour. Pulse 4 to 5 times until flour is evenly distributed. (Dough should look broken up and a little crumbly).

Transfer to a medium bowl then sprinkle ice water over mixture — start with 4 tablespoons and add from there. Using a rubber spatula, press the dough into itself. The crumbs should begin to form larger clusters. If you pinch some of the dough and it holds together, it’s ready. If the dough falls apart, add 2 to 4 more tablespoons of water and continue to press until dough comes together.

Remove dough from bowl and place in a mound on a clean surface. Work the dough just enough to form a ball. Cut ball in half then form each half into discs. Wrap each disc with plastic wrap and refrigerate at least 1 hour and up to 2 days. You can also freeze it for up to 3 months (just thaw it overnight in the fridge before using).

To make the crust, bring the water to a boil, add salt, stir in the maize meal and cook over low heat, stirring constantly for about 5 minutes or until thick.

Remove from the heat and mix in the butter, parsley, cheese and egg yolks.
Spoon mixture into the pie dish, lining the base and the sides neatly. Bake for about 30 minutes or until crisp and golden.

Remove from oven and lower the temperature to 180˚C.
To make the filling, mix the onion, pilchards, herbs, salt and pepper in a bowl.

Spread the mixture onto the warm pie crust and top with tomato slices. Sprinkle with cheese.
Whisk eggs and milk together and pour over the tomatoes.

Bake for 25- 30 minutes until set. Serve with a green salad.

Method
Preheat the oven to 200°C. Grease a 22cm round, springform pan and line the base with non-stick baking paper.

To make pastry, process flour and butter until mixture resembles coarse crumbs. Add salt, egg and iced water and process until mixture just sticks together. Turn out onto a lightly floured surface and knead gently until smooth. Shape into a disc. Wrap in plastic wrap and refrigerate for 30 minutes.

Toss the pumpkin, olive oil, garlic, chili and salt and pepper in a large bowl. Arrange on a large baking tray lined with baking paper and roast for 30 minutes or until golden and tender.
In a large bowl mix the leek, ricotta, breadcrumbs, cheese and parsley together. Set aside.
Cut two-thirds off the pastry and reserve the smaller piece. Roll out the larger piece on a lightly floured sheet of non-stick baking paper to a 25cm round. Carefully flip the pastry over your rolling pin and peel away the paper. Line the base and sides of the prepared tin with the pastry easing it into the edges and pressing into the side, taking care not

Roll out the remaining piece of pastry on a sheet of floured baking paper to a 5mm-thick, 22.5cm round, then place over filling. Trim edges, then, using a fork or your fingers, crimp edges to seal. Brush pastry with beaten egg. Using a sharp knife, make four small slits in the top. Reduce oven to 180°C, then bake for 1 hour or until pastry is golden.
Cool for at least 15 minutes before slicing. 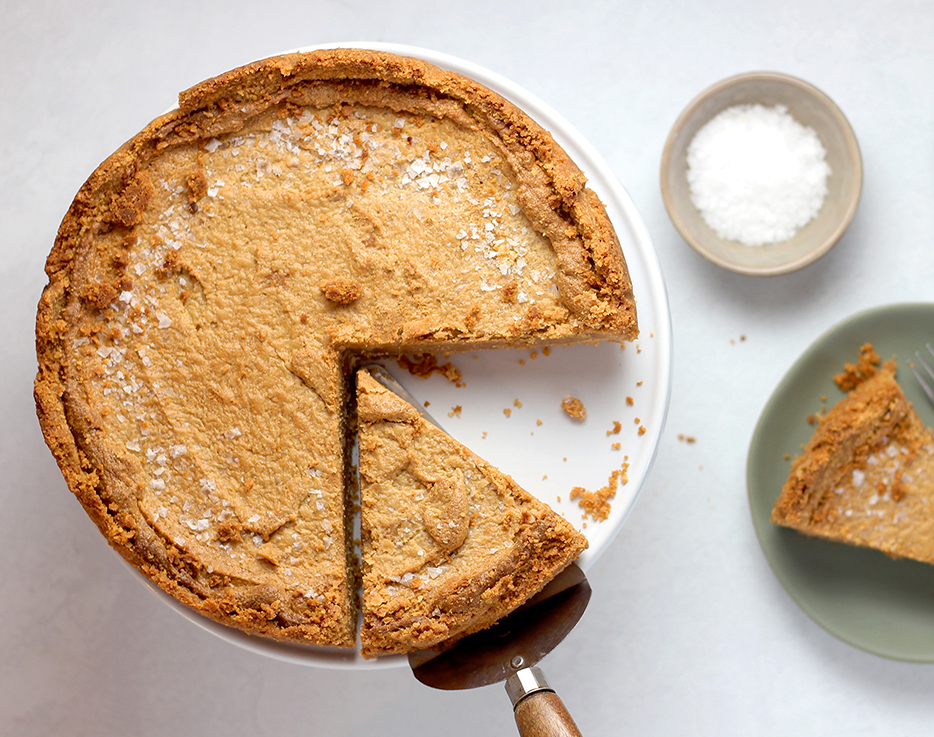 350g savory crackers (such as Salticrax)

Add the crackers to a big bowl and crush with your hands. They should be finely crushed, but not like flour. Add the brown sugar and salt and stir. Add the butter and knead until the mixture is well combined.

Place the mixture into a 23cm pie pan and use your hands to pat into a compact crust.
Stick in the freezer until it’s frozen and firm (at least 20 minutes.)

While the crust is freezing, heat the oven to 180°C and make the peanut butter filling.
Combine the brown sugar and egg in a large bowl and whisk until smooth. Stir in the peanut butter with a rubber spatula until totally smooth.

Add the filling to the frozen crust. Use an offset spatula to spread it evenly, so it totally fills the pie. Sprinkle generously with flaky salt. Bake for 35 to 40 minutes, rotating halfway through, until the crust is golden brown, and the peanut butter filling is starting to brown.

Let the pie cool at room temperature for 8 to 12 hours before serving. (You can cover it with foil after a few hours, or whenever it’s cool to the touch.)

If you want to make the crust in advance, wait until it’s firm, wrap it well with foil and refrigerate for up to 2 weeks.