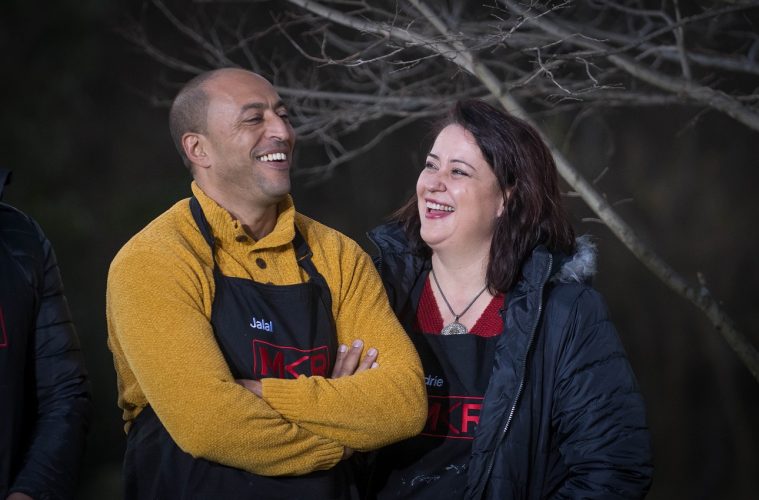 My Kitchen Rules SA: Jalal and Adrie Fold Under the Pressure

In Sunday 16 September’s artsy episode of My Kitchen Rules SA, Jalal and Adrie were eliminated from the competition. This means that Rox and Spoen, Kim and Pashi, Donald and Luyanda and Maj and Joleen will contest the semifinals of M-Net’s popular reality cooking series.

Let’s take look back at everyone’s favourite mom and dad’s time in the My Kitchen Rules SA kitchen.

The Interview: Jalal and Adrie

Where did your food journeys begin?
Jalal: I never used to cook at home, but often kept my mother company while she was cooking, it was only a few years after Adrie and I were married that I started to cook from memory.

Adrie: I learnt from my mother and grandmother and cooked my first full meal when I was 9. When I was about 14 years old, we had a hotel close to the Oliphant’s river between the mountains, where I always helped my mother over the weekends. I loved to try out food from different culture. When we got married, I asked Jalal to get one of his friends to teach me how to cook Moroccan food. This started the journey of the two of us experimenting in the kitchen with different foods, flavours and tastes.

How would you describe your dynamic in the kitchen? Who takes charge?
Adrie: We have a natural easy flow or way of working together in the kitchen. Somehow we know exactly what should be done by whom. The two things we often disagree on is that Jalal adds too much chilli or heat and I add too much salt.

You’re known as the mom and dad of MKRSA. Tell us a bit about this.
Adrie: With our Instant Restaurant having been first, one of the questions that we were pondering was what cultures and age groups the other teams would represent. At that point we certainly did not think we would be the oldest couple in the competition! Well, it soon became clear that in Table 1 there were a number of contestants that were very close to the age group of our eldest daughter and that they saw us as “old” as Minnie said!

It was only at the second Instant Restaurant when we started to get to know the other contestants that the relationship started to move into that direction. Jalal reminded Minnie of her Dad and apparently our stories and advice made them feel like mom and dad are still around.

Having grown up in very different cultures, how do you fuse Moroccan and Afrikaans culture in you cooking?
Adrie: Interestingly enough a number of the traditional foods from our cultures are very similar, for example sheep heads and “skilpaadjies” (lamb’s liver wrapped in netvet) to the point that we have made it a tradition that any boyfriend of our daughter had to first show he can be part of the tribe by eating a sheep head with the men of the family!

The Afrikaner potjie and Moroccan tagine is very much based on the same principles. From the start we decided that it is not either/or but that we are creating our own culture based on the two cultures we are coming from very much like the name of our Instant Restaurant – Mosaique. Our son’s favorite tagine is one of these fusions being a biltong and droe wors tagine with something similar to a chakalaka and beans with Moroccan spices and flavours. 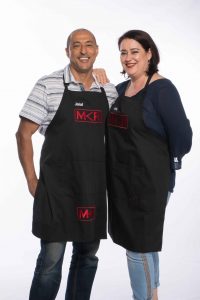 How would you describe your time on MKRSA? How have you developed as cooks and as people?

Adrie: We view our MKRSA experience as a once in a lifetime experience. We met a group of amazing people who we believe we will remain friends with. It was also a time we were able to set aside to strengthen our relationship. Jalal was away a lot while he worked in the security industry for over 8 years which caused our communication to falter a bit.

Through MKRSA, we were forced to really listen to each other again (please, we would not recommend this for any relationship as it could go either way, lol!) In terms of cooking since your whole being is consumed by thinking of new creative dishes and ways of cooking, it definitely improved our cooking skills even more.

Of the remaining teams, who has your vote to win this season and why?

Adrie: By now you should know that coming from Table 1 we stick together through thick and thin. So as long as one of our remaining Table 1 team members win, we are happy!

What’s at the top of your foodie bucket lists?

Adrie: Oh we have many! From taking pasta lessons in Tuscany, Italy to Sushi classes in Japan!

How have your food dreams evolved or changes since MKRSA?

Adrie: Our dreams have become bigger than before. We are very clear now that we do not just want a normal restaurant. If we were to get an opportunity to take our food dream further we would like to create a space where people can experience what we will call “Marrakesh Express Market” which will be an authentic old-fashioned Moorish medina market concept linked to a Moroccan restaurant.

We believe that South Africa has become a nation that loves to wander around in all kinds of markets and annual food festivals, but anyone that has ever wandered the maze of narrow pathways between Moorish shops selling all kinds of goods from pyramids of spices, preserved foods, a wide variety of pastries, teas and coffee to colourful handmade tagines and silver ware always yearn to go back to repeat the experience.

We believe this unique design, with an atmosphere that transports a person to the markets of Marrakesh will allow them the opportunity to wonder around and pick from a selection of imported and local goods or order specialty foods such as bread, pastries and sweets made by an in-house master artisan. When the customers have had enough of the market experience the “Marrakesh Express Restaurant” will be the place people can enjoy a cultural communal Moorish meal with friends.

Are you going to miss Jalal and Adrie? We surely will, too!

Who will be the first team to make it into the My Kitchen Rules SA finale? With the title and the grand prize of R1 Million almost within touching distance, the home cooking teams’ nerves must be shot!

Tune in next week to catch all the action.

Tune in for exclusive, behind-the-scenes content and interviews at www.mnet.tv/mkrsa.