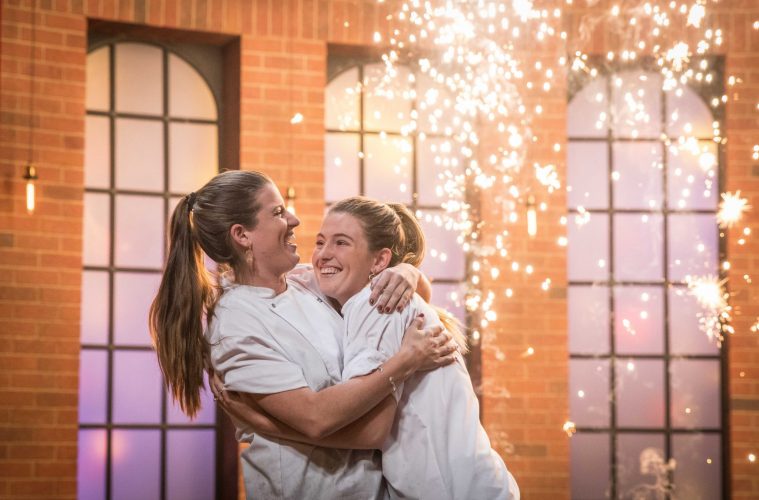 And the winners are…

Rox and Spoen Green, fun-loving farm girls from the beautiful countryside of Winterton, are the winners of Season 2 of M-Net’s popular cooking competition My Kitchen Rules South Africa!

The country sisters clinched the title and a grand R1 Million cash prize after beating newly engaged couple Kim and Pashi from Durban in a delicious season finale, in which both teams were set the task of creating a gourmet five-course meal.

In the nerve-wracking decider, the finalists had to create an appetiser, a soup, a pasta dish, a main meal and a dessert. Adding to the pressure of five courses, they were required to prepare 20 plates of each course for the grand finale, a monstrous challenge – 100 plates in all!

Rox and Spoen were low-key contenders for the entire competition and none of their fellow competitors would have expected to see them in the finale. But they wowed the judges with their simple yet flavourful vegetable dishes, like their charred corn and grilled vegetables at the first People’s Choice challenge, their first attempt at cooking tripe with samp and beans, which they nailed and who can forget their stunning all-round performance in the semifinals!

They outdid themselves when it really mattered. In the grand finale of My Kitchen Rules SA!

Amongst all the excitement, we managed to steal a few moments with this season’s winners to chat about their incredible journey.

The Interview: Rox and Spoen

Has your epic win sunken in yet?

Absolutely not. It was such a whirlwind. We are still trying to come to terms with it. We are super surprised and so excited.

How does it feel to be Season 2 winners?

Shew it’s insane. Gosh. Wow we didn’t expect to get this far so we are both feeling pretty overwhelmed at this stage. Feeling very blessed and really excited for what the future will bring.

Tell us what was running through both your minds whilst watching the finale?

We definitely did not think we were going to win. We just thought it was looking like a whitewash by Kim and Pashi. So when we were called up on stage when they were about to announce the winners, we 100% thought it was going to be them. We were super shocked to be honest.

And in the moment you were announced as the winners?

Just pure joy and adrenaline. We were just so happy. It’s been a long journey and we’ve learned so much. We are so chuffed that we could come here and actually go home with something as well. We’re so blessed.

At what point in the competition did you first think, we can win this?

The question you’ve been asked over and over. What’s your plans with the million?

We are going to donate a portion of it to the Mannenberg community that Ash and Chris were chatting about. We were just really touched by their story. In terms of our food dream, we have quite a few things lined up. Some pop-up restaurants we are hosting in the next few weeks which are all sold out. Our page and website are called That Green Life and we are going to do small secret location pop up experiences.

The first one is in Winterton and the second is in the Champagne Valley which is near our farm and the third one is in Durban. We’ll see how those go then roll out some more.

They are just nicknames. Just from life. We never really thought about them.

What was your proudest moment in the MKRSA kitchen?

There are so many. We really enjoyed cooking against Donald and Luyanda in the semi-final to get into the final. We made a real comeback from a really bad situation. We were really proud of ourselves in that moment for making a plan and not giving up.

Even right back to our Instant Restaurant. It was just such a cool thing for our family, making the Brangus Fillet that was started by our grandfather in South Africa. To bring Brangus Beef into our menu meant a lot. And meeting so many cool contestants along the way was really awesome.

The finale was also definitely a highlight for us. Particularly our dessert, we really really enjoyed that. It was something that we had never done before. A lot of the time we would just wing it and we were just lucky it worked out in our favour.

What are the memories you will carry with you from the competition?

The whole announcement at the finale and everyone being there. It was unreal. We’ll never forget that. Our town was also so supportive. The whole town sent us these videos and every time a score came up they just lost their minds. It was so sweet.

Also when we almost went home just before the semi-finals when Jalal and Adrie ended up going home. Just that realisation that we needed to pull up our socks and just do the dishes that we love and know well. We had some unreal journeys and experiences.

Cooking in the big city as opposed to the farm. How was that?

It’s definitely different cooking in a commercial kitchen with cameras and people watching you. It’s very intense. At home we’re just cooking whatever we’re growing outside and that’s what inspires us. Being in the urban environment there’s quite exotic ingredients so it’s exciting but also a bit out there for us. We are very experimental though so we enjoyed the whole experience of cooking in Joburg.

What were you favourite judges’ comments in the finale?

O gosh. They weren’t the nicest comments were they? One that will stick with us forever was our crackers being called doorstops. That wasn’t the nicest but we’ll never forget that. It was really funny and we’ll never look at a doorstop in the same way.

Also when Justine Drake said that our broth was so bang on with the flavour and how Justin said he could keep eating that dish over and over again. Just getting the scores that we did from David and J was also awesome.

Tell us your favourite and scariest experiences in the finale as well as the competition.

Our scariest was definitely in the semi-finals when we took out our lamb racks and they hadn’t cooked at all. Our hearts really dropped at that moment and thank goodness there was something we could do about it.

The best moment. There were so many. Every time we got through a round it felt so great. People appreciating our vegetable dish in the vegetarian challenge. That was really up our alley and felt really good. Even the tripe episode. As much as we didn’t like the tripe, we didn’t even taste the dish and it did really well. We were super chuffed with that as well. 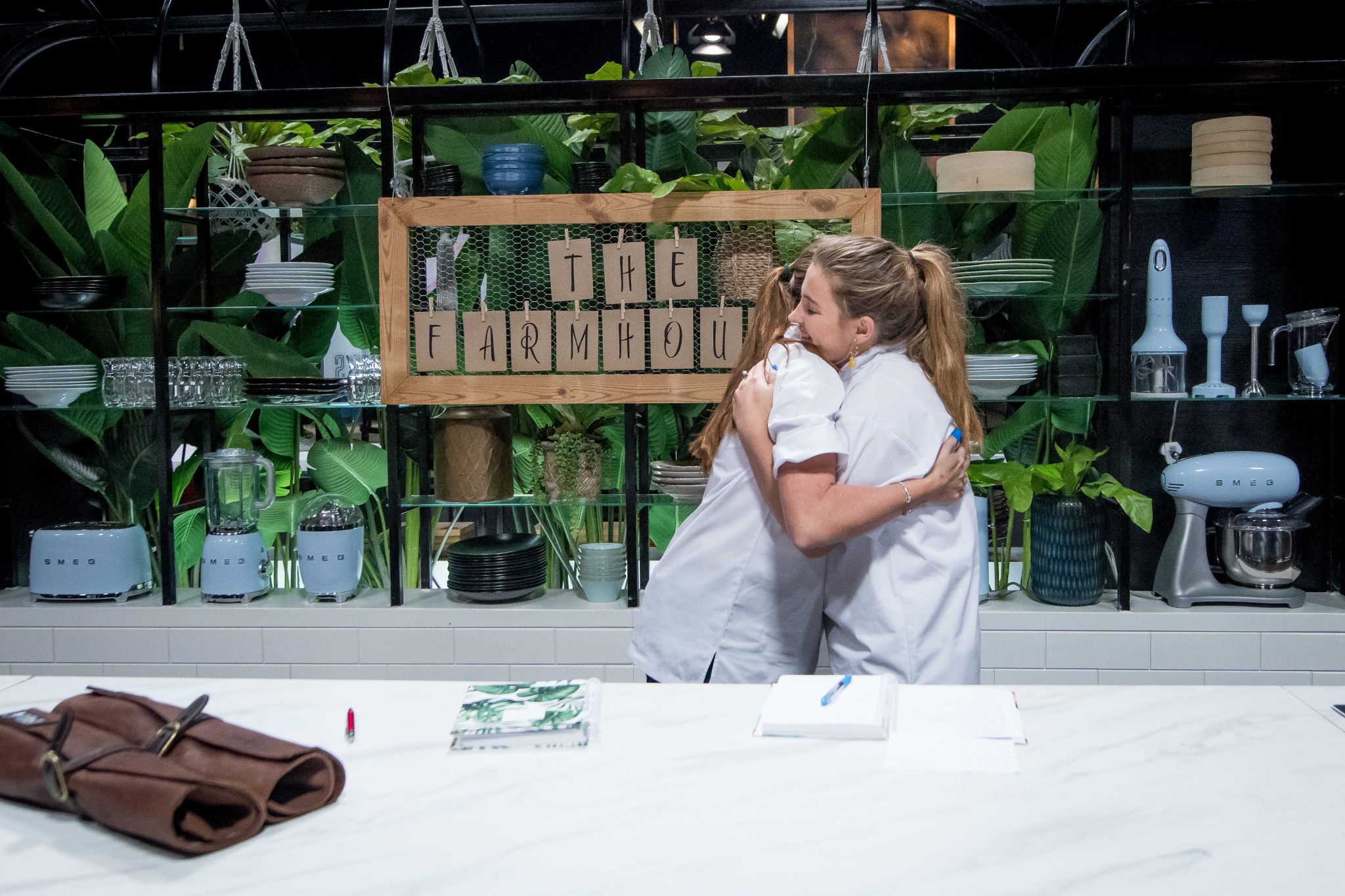 How did the competition impact your relationship as sisters?

It’s just been so much fun. We’ve really had an absolute jol meeting everyone. Minnie and Tee are such special friends of ours. Jalal and Adrie are just epic people and Kim and Pashi are amazing. We’ve loved all of them.

As sisters we’ve grown so much closer because we realised each other’s boundaries and strengths. It’s definitely brought us so much closer and shown us how much we can do. We didn’t realise our own potential and how strong we are.

Where to from here from for Rox and Spoen?

Home! We are going back to our mountain biking events next week. Then just let things sink in and see where we go from there. For our cooking future, our pop-ups are going to be our focus. We are excited about the future and what’s to come for Rox and Spoen.

The My Kitchen Rules SA Eliminated…

It was a tough but always fun and friendly competition this Season. See what the contestants had to say as they exited My Kitchen Rules SA.

Check out in exclusive, behind-the-scenes content and interviews at www.mnet.tv/mkrsa.