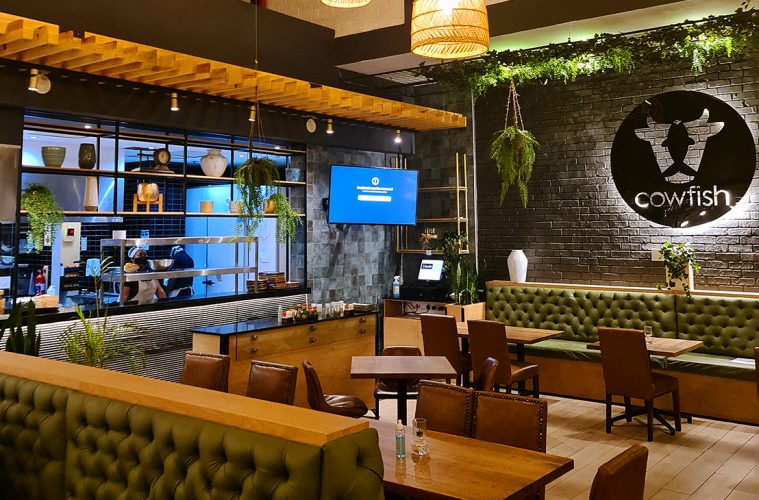 It’s not every day that we have a reason to drive to the other side of Joburg just for dinner. However, one Monday evening we ventured out to Silverstar Casino to try out their Big Deal and a big deal it certainly was! 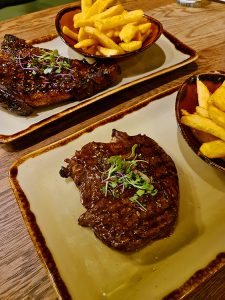 Cowfish is the new kid on the block, marrying the best seafood and sushi with some of the most succulent steaks and burgers. Most restaurants pride themselves on a selection of signature dishes but at Cowfish they are masters of everything. This is bold claim which we were determined to test.

To say we were spoiled for choice was a true understatement. Burgers, sushi, dim sum and epic cocktails! What more could any food fanatic ask for? With so much on offer, it took quite some time to decide what to try. With recommendations from manager Marius and our two incredibly attentive waiters, Sibusiso and Wayne, we decided on Fried Halloumi with Thai sweet chilli sauce and 4X4 (California rolls topped with prawn tempura and chilli mayo) and Double Crunch (Prawn tempura roll drizzled tempura flakes, teriyaki sauce and sweet chilli spicy mayo) sushi to start.

Plates packed with flavour arrived at our table along with two very special cocktails – The Flaming Gin & Juice is an experience in itself. Soon it was time for mains. Sibusiso helped us choose the 600g T-Bone with tempura onions rings and the 300g Rib Eye grilled in Asian BBQ sauce, served with crispy potato chips. 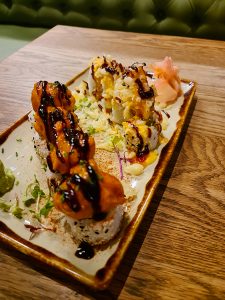 We paced ourselves and savoured each bite as Sibusiso had already insisted that we have dessert. Our chosen sweet treats were a Chocolate Meltdown which oozed decadent melted dark chocolate and Kawasura Rolls – springrolls filled with strawberry, hazelnuts, dark and white chocolate and served with vanilla ice cream.

After our last mouthfuls, we were very satisfied indeed. Cowfish has every dish imaginable and aces each one. There’s so much still to try and we’ll definitely be back soon.

Until 31 March you can tuck into Cowfish’s signature burgers and sushi for 20% off with Silverstar’s Big Deal from Monday to Wednesday until 31 March!